You are here: Home / Books / Book Review: Art Critic Peter Schjeldahl — Connecting Readers to the World in a New Way 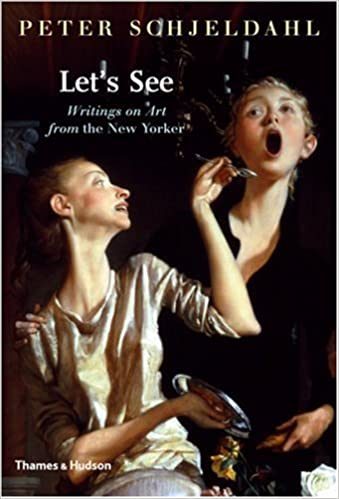 In December 2019 there was an essay in The New Yorker by Peter Schjeldahl called “The Art of Dying,” a very moving account of the art critic facing a diagnosis of lung cancer and looking back on his not quite long enough life of 78 years. It is free form, done with the élan and wit and honesty that we have come to expect from his essays on art in that magazine. At first it looks a bit scattershot, mixing autobiography and reminiscences in nothing resembling a chronology, but as you read you see that it is all of a piece, and gradually, we get a picture of who Schjeldahl is: his rather absent parents, his place in the world as the eldest of five children brought up in a small town in Minnesota, his bout with polio when he was eight, his attempts at college, his life in Manhattan as a poet experimenting with far too many drugs, his descent into alcoholism and his eventual success with rehab during his marriage to Brooke Alderson, as well as his failures with and his reconciliation with their only child, Ada. He writes tenderly about old friends, about his need and resentment of authority, what writing means to him — everything! — and how he became an art critic instead of the poet he thought he wanted to be. He spares himself and the reader nothing, wondering towards the end whether “I can stay upbeat in spirit.  A thing about dying is that you can’t consult anyone who has done it.  No rehearsals.  No mulligans.”  When I finished it I wanted more, so although I had been reading his columns for years, I got these collections, suspecting that with the imprimatur of permanence his work would have more heft than when read on the fly.

My hunch has been more than validated. Schjeldahl is more than a wonderful art critic, he is a great writer. Not only are “the shapes of his sentences” (Sontag’s way of defining style) a pleasure to read, but more important, these short essays reveal a mind so engaging, so curious, so humble and yet so erudite, that after reading just a few of them, you feel connected to the world in an entirely new way. Which is exactly what we need at this moment in our country’s history.

“Will we ever have the pleasure of wandering through a museum and looking at paintings again?” a friend recently asked, and when I shrugged I could feel an ache in my heart I had not expected. So many things we took for granted. Yet museums were special, like concert and opera halls, places where you could feel your spirits lift, places where the cares of ordinary life could be set aside for a few hours.

But the good news is that while we wait to enjoy those pleasures again you can read Schjeldahl’s essays and, with the help of the Internet, which has proven more than a friend in these trying times, find the paintings that he is describing. You can also reassess how you feel about a painter,  even admitting contradictory feelings, just as Schjeldahl does, for example, when looking at Matisse. He dislikes much about Matisse, writing about the spectacular 1992 show at MOMA for the Village Voice, “He omits any messy appeal to the heart. He is monstrously cold.”  Yet when talking about an equally wonderful MOMA show in 2010 in The New Yorker he admits that The Piano Lesson is his favorite twentieth century painting (telling us, in the process that Psycho is his favorite movie) and then says,

I’m just in a mood—enhanced, now, by the thought of the inexplicable, inchoately thrilling arc of black paint that slashes Matisse’s Portrait of Olga Merson (1911) from chin to left thigh—to insist on a hierarchy of sensations that favor the experience of being tripped cleanly out of ourselves and into wondering glee.”

I knew that portrait but when alerted to that black slash, I suddenly saw it anew, wondering what Matisse might be telling us about his somewhat mysterious relationship with Olga.

“Oh, lighten up, Vincent,”  I’ve felt at times.  “It’s only art.”  There’s a taxing relentlessness to his intensity, like that of a friend with a personality stuck in high gear.  But we always hang in with van Gogh if we love painting and want to know the extreme form of love, which will persist for as long as our eyes are wired to our feelings.

And then how he goes on to talk about Van Gogh’s Portrait of Joseph Roulin and the many layers of that friendship between artist and postmaster which are revealed in this superb work that owes so much to Van Gogh’s beloved Japanese prints.  And you thought you knew all you needed to know about Van Gogh.

Diego Velázquez (1599-1660) was as good at oil painting as anyone has been at anything. When Edouard Manet, discovering him at the Prado in Madrid in 1865, said that he wondered why others, including himself, bothered, he expressed an enduring thought: painting has been done, and Velázquez did it.  That was a watershed moment.  Modern painting was born when Manet saw Velázquez and despaired.

Then he goes on:

Velázquez’s theatricality includes you in its dynamic.  The space is essentially cylindrical, swooping around behind figures and out into your space.  Time lives in it, everything turns.  Often, when the eyes of a subject get yours they will just have done so: click.  A half dozen sets of eyes do this in Las Meninas, which, when I first saw it after a sleepless night flight from New York, caused me to hallucinate that the characters were alive in the room with me.

As I read those lines and looked at some of those works on my screen, I was almost as disoriented as Schjeldahl, with those people whirling in and out of the painting as if they were entering and leaving a stage.

Or a tiny piece about Giovanni Bellini’s St. Francis in the Desert which is perhaps the most surprising of all:

The jewel-like precision rivals that of contemporaneous Flemish oils but is suffused with Italian tenderness.  The painting stuns with its conception of physical and spiritual vision as one and the same.  We are seduced by naturalistic and poetic details—that personable donkey, unforgettably—while being set back on our heels by the crystalline style.  Like the humility of St. Francis, the work makes you want to be worthy of it. Change your life.

There are gems for every taste in these two books.  The one about Arshile Gorky made me cry, his insights on de Kooning made me reconsider, his thoughts on Manet made me want to cheer, and the profile of Laura Owens in which they talk about Patsy Cline sent shivers up my spine.  You can browse as far back as Piero della Francesca and the Aztecs and as far forward as Kerry James Marshall and Mona Hatoum.  You can learn about Vuillard and his mother, Fairfield Porter’s ambitious range, and why Norman Rockwell’s genius can sometimes feel cloying. Why Rembrandt will always have the last word in Dutch painting, and maybe in all painting, why Weegee can excite even the most jaded Millennials in the 21st century.  Or weep at the heart-breaking story of San Francisco artist Jay Defeo. 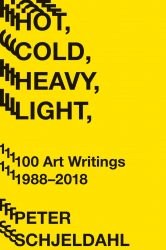 You can dip into these essays when you need them most, because they have the double virtues of being brief and also disarmingly personal, so you are abruptly floating away from your life and standing next to Schjeldahl as he takes a deep breath and tells the curators of the Whitney that “they have caught themselves in a bind” with their blockbuster show, “Making Sense of America” in 1999.  Or when he wanders around a totally changed Berlin in 1989; or when he interviews a tiny, shy woman named Marian Goodman who seems an infinite source of knowledge about owning a gallery; or when he puts critic Clement Greenberg in his proper and not very exalted place. Proof that the value of any book, as an editor once said to me, lies in its sense of intimacy.

Good essays about art help us learn to see.  Wonderful essays about the artists in our lives — which means all the artists through history, because, as Schjeldahl so eloquently puts it, “all art is contemporary” — help us learn how to live.  And so he deserves the last encouraging word, which reflects his extraordinary love of the world — a love that you can feel even if he is less than thrilled — and his ability to present a challenge to his readers.  He concluded his essay on Las Meninas in April of this year with this:

Here’s a prediction of our experience when we are again free to wander museums: Everything in them will be other than what we remember. The objects won’t have altered, but we will have, in some ratio of good and ill. The casualties of the coronavirus will accompany us spectrally. Until, inevitably, we begin to forget, for a while we will have been reminded of our oneness throughout the world and across time with all the living and the dead. The works await us as expressions of individuals and of entire cultures that have been—and vividly remain—light-years ahead of what passes for our understanding. Things that are better than other things, they may even induce us to consider, however briefly, becoming a bit better, too.