Everything about Dorin Schumacher’s story indicates that clichés about the ’50s are so powerful because things really were that way: repressive, poisonous, full of unspoken secrets and blustering ignorance. 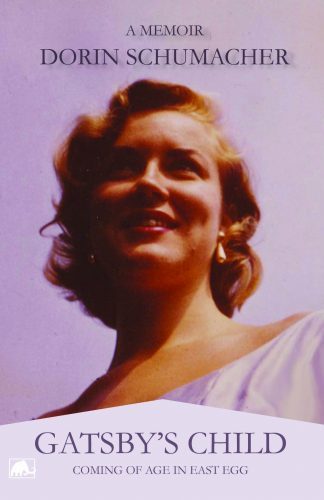 There’s something inherently fascinating about corrupt old WASPs. Grey Gardens is probably the most obvious example, but the Kennedys have a whiff of it, too. How much better story it is when all is not well in Camelot. It’s this appeal Dorin Schumacher draws on to keep the reader interested in Gatsby’s Child, her memoir. Without that inherent lure, alas, the book has no propulsive reason to exist.

Schumacher was raised on Long Island by parents who were abusive inasmuch as they simply had no idea how to rear children. Her mother is exactly the kind of soused ’50s housewife we can now recognize as alcoholic due to terminal boredom. Her father is a con man of unclear intent and manipulative actions. They have an atrocious marriage. After an incident in which a teenaged Dorin sneaks out with older men and encounters the police, her parents yell at each other and then do nothing to punish her: “As usual, I had no rules, no limitations, no expectations, no consequences. They didn’t really care what I did. As long as I didn’t cause them extra work or trouble.” Her father used to try and French-kiss her when saying goodbye, and “When I recoiled in disgust, he laughed.” A lot of her parents’ maltreatment seems to spring from ignorance rather than malice, but the effect—a horrendous childhood—is the same.

Both parents are invested in putting up a good front among their wealthy neighbors, even though money is scarce and poorly spent. Her mother came from old money and outdated fame: she is descended from the Pells (like the educational grant), and Schumacher’s grandmother was a silent film star and later director. Her father came from a loving but un-WASPy Jewish family who are barely in Schumacher’s life because of her parents’ social-climbing ambitions. Schumacher’s home environment was so isolated that she didn’t understand how dysfunctional it was; being yelled at, neglected, and lied to were normal for her until she was old enough to leave home.

In this way, Gatsby’s Child resembles The Glass Castle, in that it’s a How I Got Out memoir. Both books contain a series of stories about a strange, terrible family, from the perspective of the child who managed to break free and succeed beyond it. Unfortunately, Schumacher’s book wanders and rambles with a loosely organized narrative strategy, perpetually telling stories instead of telling a story. Her prose is unadorned but highly readable and there are insights here that cut deep: “I don’t want to be like my mother. She lets her dogs die.” But, in the course of assembling and finishing Gatsby’s Child, Schumacher needed a more attentive editor. She cannot distinguish between what is working and what isn’t, and plenty of the book isn’t. It’s repetitive, as if the chapters were individual essays that have not been fully integrated into a manuscript. A number of the issues that particularly occupy Schumacher about her youth are unimpressive. Occasionally, her tone slips into bitterness, which is the surest way to repel even sympathetic readers.

Of course, Schumacher has plenty to be bitter about. Her stories are appalling. Anti-Semitism leads her parents to dwell in haughty fear. Teachers and peers are sometimes kind and often unhelpful. Her father forges her signature and steals a valuable parcel of land from her. Everything about her story indicates that clichés about the ’50s are so powerful because things really were that way: repressive, poisonous, full of unspoken secrets and blustering ignorance. However, because they are clichés, the stories aren’t terribly interesting, despite Schumacher’s competent work in setting them down.

Because Schumacher has since gained insight about her upbringing, she’s able to accompany her memories with analysis as well as emotional depth to which she didn’t have access at the time. This gives her memoir a kaleidoscopic feel, the sense that every memory tugs a handful of cortical strings. So this chronicle of her experiences is valuable, in the same way street photography of bygone eras remains valuable. But, again, there’s so little urgency about these stories, or about the book as a whole. If it wasn’t for its lookie-loo angle in the decay of old-monied American society, there isn’t much in Gatsby’s Child to distinguish it from a family album best left in the attic.