Smartly, Vanessa Rubin has gathered a strong group of collaborators, a number of whom knew Tadd Dameron personally and all of whom know his music well. 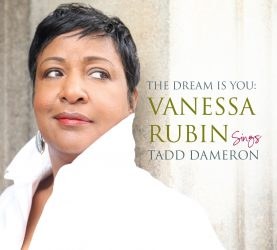 Tadd Dameron was an important figure in ’40s and ’50s jazz. As a pianist, he was not influential in the same way that Bud Powell and Thelonious Monk were, but he understood the bop language early on. He performed and recorded with many of the most accomplished players of the era; his contributions were particularly vital in terms of  songwriting and arranging. Unlike the melodic lines fashioned by Charlie Parker or Dizzy Gillespie in their tunes, Dameron shaped lines in a less jagged, more songwriter-ly fashion. This was strikingly clear in his ballad writing. Harmonically, many of his tunes followed the conventional patterns of advanced blues and “I Got Rhythm” changes, but he also infused a jazz-savvy sensibility into harmony. He was arguably most influential as an arranger. Dameron applied creative techniques of voicing and orchestration to ensembles of every size — trios, quartets, sextets, big bands — and made them all sound hip.

Apart from jazz insiders, Dameron’s contributions are not well-known. In fact, arrangers have always been an unsung group — unless they were also recognized as soloists, like Mary Lou Williams, Gerry Mulligan, or Frank Foster. This is the first all-vocal album of Dameron’s work, and it’s the goal of singer-producer Vanessa Rubin, with coproducer Cecil Bridgewater, to bring the musician wider renown.

To provide arrangements, Rubin wisely enlisted the help of several people who knew Dameron: Benny Golson, Frank Foster, Jimmy Heath, and Willie “Face” Smith. Bobby Watson was the only arranger here who hadn’t been acquainted with him. Rubin wrote lyrics for “The Dream Is You” and the retitled “Reveries Do Come True,” but lyrics have been attached to most of these songs for a long time.

Rubin’s vocal approach is slightly offhanded and largely conversational. She saves her power for the occasional big punch. She’s very confident rhythmically; for me, her style is generally closest to that of singer Carmen McRae. She can deliver straight-ahead sincerity as well as a light funky touch à la Etta Jones.

“Lady Bird,” one of Dameron’s best-known tunes, is taken here at a slightly slower tempo than usual. Frank Foster’s arrangement is busier than Dameron’s usual approach, with more background and contrapuntal lines. Foster has written a soli section that features Rubin singing in harmony with the reed section. It ends with a quotation from Miles Davis’s line on the same changes — called “Half Nelson.” Allen’s well-wrought trumpet solo is in the Miles vein and Cowherd’s solo fits well. Foster includes the altered return section of the melody in his arrangement and then Rubin takes it out with a nice short tag.

“Kitchenette Across The Hall” is presented in a stripped-down version that Rubin and her trio created in the studio. This playful tune is given a light, two-beat feel that moves into swing in the bridge. Cowherd solos nicely on piano. It’s got a kind of Fats Waller-gone-slightly-modern feel.

“If You Could See Me Now” is not just Dameron’s most well-known ballad. The tune is possibly the best-known ballad to emerge from the world of bop. Golson’s arrangement stretches a bit more outside than others on the album. The vocal is lushly backed by a full horn section. Rubin sticks pretty much to the melody, though she plays a bit with time. Anderson plays a trombone solo which manages to feel both relaxed and urgent — largely because of his sound (as opposed to his choice of notes). Allen plays an excellent, highly embellished trumpet chorus before Rubin’s restatement of the melody, with a slow tag that ends on a slightly suspended note.

Frank Foster arranges “Weekend” in an up 6/8 tempo that shifts to a medium-up swing. He tends to write fairly dense arrangements, and this is another example — there’s a lot going on here yet nothing slows down the momentum of the tune. Rubin is restrained in the 6/8 section, but then she unbuckles when the tune moves into the swing feel. Overall, a lively track with a nice bounce.

“On a Misty Night” is Jimmy Heath’s medium tempo arrangement. I think that this tune, based on the harmony of “September in the Rain,” is one of the prettiest lines Dameron ever wrote. I like it played a bit slower then it is here — to let the melody really sound. But I have no major quibble with this tempo. Rubin treats the tune in her conversational way, then Bruce Williams solos on alto sax. When the vocalist returns, she takes a looser approach to the time and melody, shaping it in a slightly more soul-ish direction. Heath moves into a full orchestration leading to a brief piano interlude and the close.

“Never Been in Love” is a tune that is not often performed. Bobby Watson’s chart fits stylistically with the other arrangements on the album. It’s jazz, but the tempo and Rubin’s approach put this song almost into the genre of show tune. Allen impresses again with his trumpet solo.

“Next Time Around” is the retitled version of “Soultrane,” a ballad arrangement created by the group in the studio. The tune is probably most familiar from its appearance on the 1956 album Mating Call with the Tadd Dameron Quartet featuring John Coltrane. That version is slightly faster and introduces a double-time section during Trane’s solo. This take is slow throughout. Rubin deftly takes the melody, followed by a melodic Davis bass solo. When Rubin comes back, she lets the lyric breathe a little more, which is pleasing.

Willie “Face” Smith’s arrangement of “Good Bait” is infused with some of the variations and fragments of improvisations that have been generated by this much-played tune through the decades. Rubin handles the clever lyrics deftly; the length of some of the lines calls for good breath control. Nice bass work by Davis. Nothing overly complicated here, but an effective outing.

“Reveries Do Come True” (The Dream Is You) is another Heath arrangement, and he approaches the tune as a kind of Latin-beguine hybrid. Rubin is slightly more winsome here, which fits. Cowherd plays an effective piano solo.

Heath’s arrangement of “Whatever Possessed Me” starts off in a slightly more “modern” vein and settles into a more lush mode as this ballad unspools. Rubin has some intonation issues here that are slightly distracting. Higgins plays a nice solo. The full ensemble stretches out a bit, which sets Rubin up for the finish.

“You’re a Joy,” another ballad, arranged by Foster, starts with Rubin accompanied by Cowherd. They are joined by the rhythm section, then the full band. Rubin sings the chorus, then the ensemble accompanies Higgins on flute, playing what seems to be a mostly written-out solo part. Rubin comes back in, fully committed to the lyric. I felt the arrangement didn’t need to go into so many choruses after the instrumental section.

Heath’s arrangement of “I Think I’ll Go Away” takes a slightly insistent Latin tempo. The vocal commences as baritone sax fills behind Rubin. Things open up briefly to the full ensemble, then we return to the singer and the baritone. Allen takes a nice solo and then Ruben comes back in, singing a semi-scat with the band. She takes off on her own and everyone vamps before taking it out on “I think I’ll Go Away.”

Rubin has undertaken a pretty ambitious project here, and she did the smart thing by gathering a strong group of collaborators, a number of whom knew Dameron personally and all of whom know his music well. The result is an album that is carried out on a consistently high creative level, though, to my ears, there are few moments of real excitement and surprise. If you know Dameron’s work, it will be enticing to hear how his tunes have been treated. If you don’t, it will be an introduction to music created by an important member of a cohort of underappreciated jazz arrangers and composers.