Handel & Haydn Society’s Haydn and Mozart is about as good as it gets; Martyn Brabbins’ recording of A Sea Symphony is one of the year’s best releases; and for elegance and technical command, you can’t go wrong with Tilson Thomas and his San Francisco Symphony. 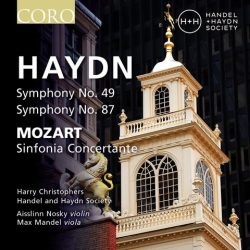 Harry Christophers and the Handel & Haydn Society (H&H) continue their Mozart/Haydn survey with a spirited new pairing (on Coro) of the latter’s Symphonies nos. 49 and 87 and the former’s violin-viola Sinfonia concertante.

The Sinfonia concertante pairs H&H concertmaster Aisslinn Nosky with one of the ensemble’s violists, Max Mandel. Theirs is a charismatic performance.

Tempos are pert but never too fast. Interactions between the parts – which tend to pass material back and forth, with each soloist embellishing it a bit along the way – are always collegial and warm. The pair make synergic work of the involved opening movement, gamely mine the second’s sweet sadness, and cavort through the ebullient finale with magnificent panache (their extroverted “Mannheim rockets” at the end of the movement are worth the price of the disc by themselves).

Christophers leads H&H in an accompaniment of real freshness and vigor, especially during that blazing finale.

In the F-minor no. 49 (La Passione), Christophers draws playing from H&H that alternates brooding intensity and lyrical release during the remarkable first movement. The explosive, turbulent second rips, while the minuet is suitably stern. And the bristling, minor-key finale lacks nothing for excitement.

A similar sense of drive (though less grim) also marks the pairing’s account of the A-major Symphony no. 87. The outer movements are boldly colored, the second’s unabashed lyricism shines, and the minuet brims with unalloyed joy.

This is, like the ensemble’s previous release, Haydn about as good as it gets: crackling with spirit and personality. In this instance, too, ditto for the Mozart. 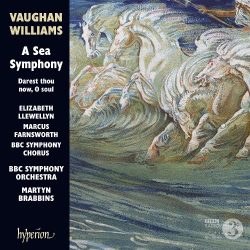 It might not come to mind as readily as Shostakovich’s, but Ralph Vaughan Williams’ A Sea Symphony is quite possible the most epic first entry into the genre after Brahms’s. An hour-plus-long setting of excerpts from Walt Whitman’s Leaves of Grass, it draws on two big traditions: the late-Romantic symphonic one and the great, British choral one. The results are fresh and extraordinary, as Martyn Brabbins’ new recording with the BBC Symphony Chorus & Orchestra, part of the conductor’s ongoing Vaughan Williams symphony cycle, makes clear.

At the heart of this album (on Hyperion) is a choral performance of real vitality. The BBC Symphony Chorus executes their role in this piece with a true sense of occasion, singing with rich tone, terrific attention to dynamic and articulative nuance, excellent blend, and rhythmic vitality. They’re joined, impressively, by soprano Elizabeth Llewellyn and tenor Marcus Farnsworth, whose respective accounts of the score’s solo parts teem with purpose, color, and excitement.

Presiding over the whole affair is Brabbins, who’s interpretive sense of the Sea Symphony is commanding. Tempos are never slack: the third-movement scherzo, “The Waves,” seethes and the majestic opening hymn, “A song for all seas, all ships,” flows with inexorable direction and logic. Textures are impressively clean and balanced: the harp glissandos over the first movement’s grandiose inaugural section, for instance, come over with gleaming clarity and the subtle string solos in the middle of “The Waves” sparkle.

At the same time, the score’s introspective moments are generously shaped. The second movement, “On the beach at night alone,” is played with potent focus while Brabbins paces the finale’s devotional episodes with a sure hand and strong understanding of the music’s underlying tension. In a word, then, this is as grand and stirring a Sea Symphony as they come, one of the year’s best releases.

Filling out the disc is another short Whitman setting of Vaughan Williams’: the three-minute-long “Darest thou now, O Soul.” A subdued hymn for voices and strings, it’s sung here with warmth and fervency. 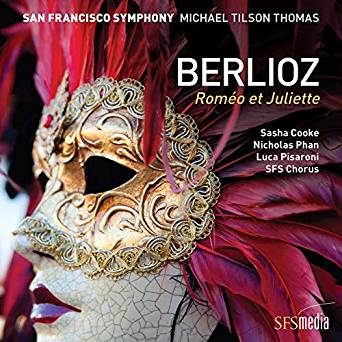 For his first two recordings as music director of the San Francisco Symphony (SFS), Michael Tilson Thomas chose music from Prokofiev’s Roméo and Juliet and Berlioz’s Symphonie fantastique. Now, more than twenty years on and nearing the end of his tenure (MTT steps down at the end of the 2020 season), he’s combined the story from one piece and composer of the other with a new account of Berlioz’s singular Romeo and Juliet Symphony.

Berlioz’s 1839 symphonic adaptation of Shakespeare’s play is among his less-familiar works. Yet if it lacks the subjective directness (and sheer wildness factor) of the Symphonie fantastique, it stands, in terms of scoring and approach to drama, among the 19th century’s most visionary artworks in any field.

This SFS Media recording reveals many of those forward-looking qualities. Berlioz’s brilliant scoring shines and the SFS plays with lightness and lucidity throughout. The ensemble’s execution of the Roméo’s sonic layerings is particularly impressive: from the terraced dynamics of the “Romeo seul” movement to the pianissississimo clarinet and oboe writing in “Romeo in the family-vault of the Capulets” to the mighty final peroration, this is a performance that’s as sensitive to the music’s details as it is to its expressive extremes.

The singing, too, is first-rate: mezzo-soprano Sasha Cooke and tenor Nicholas Phan make compelling work of their first-part solos and Luca Pisaroni proves a charismatic Friar Laurence. The SFS Chorus is in robust voice, especially during “Juliet’s Funeral Cortege,” which here surges with restrained grief.

At the same time, this isn’t the most consistently urgent Roméo and Juliet to hit the market of late. Pierre Boulez’s 2003 account with the Cleveland Orchestra offers similarly luminous textures but more brio, especially in the “Queen Mab” Scherzo (which is faster by more than a minute). And Robin Ticciati’s 2016 recording with the Swedish Radio Symphony Orchestra is, overall, more spirited and propulsive than MTT’s.

That said, this isn’t a sluggish Roméo and, for elegance and technical command, you can’t go wrong with Tilson Thomas and his SFS. Taped live last summer, you’d never know it from the recording: no extraneous audience sounds can be heard while the orchestral balances are realized with (as noted above) supreme clarity.