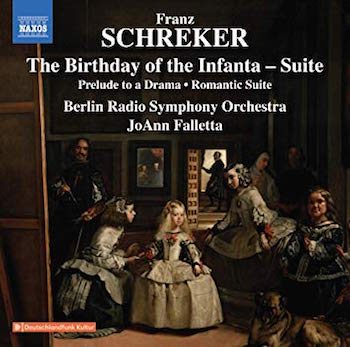 Franz Schreker is one of the composers who loomed large in German music around and after World War 1, but whose work is largely forgotten (except for connoisseurs) today. That neglect is unfair, or so JoAnn Falletta’s fantastic new recording of Schreker orchestral works with the Berlin Radio Symphony Orchestra (BRSO) makes clear.

Schreker’s musical language evokes the last flowering of late-Romanticism – think a cross of Mahler, Zemlinsky, and Strauss, and you’ve got at least a referential touchstone. At the same time, his music is hardly derivative.

That comes across powerfully in the Vorspiel zu einem Drama (Prelude to a Drama), a distillation of the action of Schreker’s 1914 opera Die Gezeichneten. A colorful evocation of a tragedy adapted by the composer from Franz Wedekind’s Hidalla, the Vorspiel represents Schreker at his most dramatically potent.

The BRSO’s performance here is full of sumptuous color. Its blurry opening, with its keyboard/harp figures accompanying lyrical cello and trumpet lines, is beguilingly atmospheric. So is the music representing Tamare and Carlotta, two of the opera’s principal characters. And the bacchanal builds to a rousing climax.

Similar energy and iridescence mark the BRSO’s reading of Schreker’s Der Geburtstag der Infantin Suite. An adaptation of Oscar Wilde’s short story The Birthday of the Infanta, Schreker’s pantomime draws on the composer’s considerable melodic gifts. While essentially a series of dances, there’s a strong sense of characterization present in each of them, particularly the elegant restraint of the Infanta’s music and the nappy grotesquerie for that of the doomed Dwarf. Add to that a strong sense of dramatic progression, and you’ve got a pretty engaging twenty-minute long piece.

Falletta leads an interpretation that is fully attuned to the score’s dancing impulses. Her tempos all move smartly and orchestral textures are light on their feet. “Die Marionetten” sings with glowing delicacy, while the Dwarf’s “Mit dem Wind im Frühling” brims with personality. And the too-short, concluding “Nachklang” is played with pristine tenderness.

Similarly zesty conducting marks Falletta’s account of Schreker’s early Romantische Suite. Here, she ably draws out the passionate extremes of the “Idylle” and “Intermezzo,” while also mining the bumptious humor of the scherzo and getting the waltzing refrains of closing “Tanz” to lilt ominously. 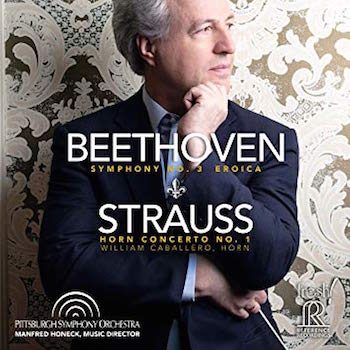 It’s a safe bet that Beethoven’s Eroica Symphony lost its power to truly shock and bewilder a good hundred-and-fifty years ago (probably more). Not that it isn’t one of the freshest, most original symphonies in the canon (it is). But even the most inventive ideas can become passé over time.

Leave it to Manfred Honeck and his Pittsburgh Symphony, though, to fully restore the piece’s luster in a brilliant new recording that continues the pair’s irrepressible traversal of the standard repertoire for Reference Recordings.

Like their superb accounts of the Fifth and Seventh Symphonies a couple years back, this new interpretation relies in about equal measure on such (seemingly) unexciting elements as rhythmic energy and unanimity of articulation. The results, though, when combined with Honeck’s judicious tempo choices and the inherent expressivity of Beethoven’s musical argument, is compelling.

Sometimes it’s even shocking. (No, really.) And when it’s not that, the playing is amazingly fresh and alive.

All of the first movement’s jarring articulations – the slashing forte attacks and the gunshot-like sforzandi – are explosive. The funeral march’s tread is weighty but never turgid. The quicksilver scherzo dances with impish, proto-Mendelssohnian glee. And the finale offers a winning drama by itself: at once seemingly simple yet profoundly moving.

Throughout, the melodic line is always front-and-center: Beethoven might not always have been interested in writing tunes, but Honeck’s interpretation revels in the Eroica’s captivating play of melodies and counterpoint.

Rounding out the disc is a bracing performance of Richard Strauss’s Horn Concerto no. 1, featuring the Pittsburgh Symphony’s principal horn, William Caballero, as soloist. The same forceful, driving energy that marked the Beethoven is to be found in the Strauss, and this approach gamely fits the music’s youthful mood.

Caballero is more than a match for its fearsome virtuosic requirements, playing with warm, burnished sonority, and shaping the music’s character through tonal nuance and variations of articulation, even at blistering tempos (just listen to his take on the finale). It’s a bravura performance – and a welcome treat to catch one of this impressive ensemble’s members taking a turn in the solo spotlight. 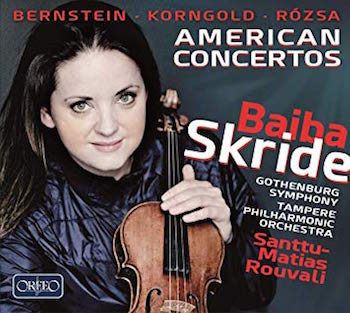 Baiba Skride’s American Concertos doesn’t quite head where you think it might. Yes, all three of its solo selections were written on American shores. But that (and the choice of solo instrument) is about all they’ve got in common.

Leonard Bernstein’s Serenade is the only one written by a native-born composer. A glittering tour-de-force from 1955, it’s loosely inspired by Plato’s Symposium, though Bernstein’s musical language, a thorough-going mix of mid-century neo-Classicism and jazz, is decidedly of its time and place. The piece has been recorded widely over the years, but rarely with the panache and technical refinement Skride brings to her performance. She’s got Bernstein’s style easily in hand, so Serenade’s improvisatory, jam-session-like moments really jump and Bernstein’s sometimes-awkward violin writing holds no terrors for her.

Then there’s Erich Wolfgang Korngold’s Violin Concerto. Written after the composer had fled Nazi Germany and established himself as a titan of film music, the Concerto was panned early on (as being Hollywood-lite) and marked the decline of Korngold’s post-World War 2 concert hall fortunes.

Don’t tell that to Skride, who plays the Concerto like it’s one by Mendelssohn or Tchaikovsky: sweepingly tuneful but serious as hell. In her hands, the first movement brims with sweetness – but also agitation. The second is beautiful, to be sure, but plenty wistful, too, and Skride’s take on the finale is a carefree, romping antidote.

The most intriguing piece here, though, is Miklós Rózsa’s 1954 Violin Concerto. Rózsa was, like Korngold, another Hollywood émigré, though his concert music has fared rather less well since his death in 1995. The present piece echoes the style of Bartók pretty strongly: its rhythms and melodies are heavily influenced by Eastern European folk music and the Concerto’s structure is strongly Classical.

Skride proves a strong advocate for it, drawing out its considerable lyrical reserves while not stinting on its punchier gestures. Less concentrated than the second Bartók concerto Rózsa’s may be, but it’s an inviting introduction to his body of concert music, nonetheless.

In all three concertos, Skride’s joined by conductor Santtu-Matias Rouvali, who’s totally simpatico with her in terms of tempo, phrasing, and character. Both the Gothenburg Symphony (in the Bernstein and Korngold) and Tampere Philharmonic (in the Rózsa) play with verve and color.

The latter ensemble also gets to strut its stuff in Bernstein’s Symphonic Dances from West Side Story, the album’s bonus filler. Theirs is a rather precious reading of the piece – cautious and on the slow side – though the “Cool” Fugue rips and the Finale sings with Mahlerian warmth. It’s not the most necessary piece here, but it’s not why you’d get the set in the first place.