With this album, Luciana Souza has created her own indelible “book” of songs that ache and celebrate, muse and regret, dream and mourn. 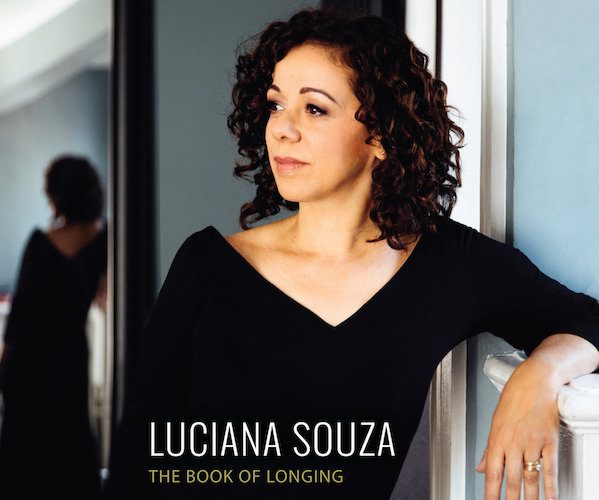 In an eloquent “album bio” for her latest release, vocalist and composer Luciana Souza says, “I’m always navigating between poetry, Brazilian, and a more wordless and instrumental context.” That the Saõ Paulo native’s musical world spins on this three-pronged axis is no surprise to anyone who has followed her career. Of her previous 10 releases—six of them Grammy-nominated—three have explored the Brazilian repertoire she grew up with, and most of the songs on her last album, 2015’s Speaking in Tongues, feature wordless vocals in brilliant interplay with her fellow musicians. Two of her earlier efforts set poems to music—2000’s The Poems of Elizabeth Bishop and Other Songs and 2004’s Neruda—and her intense love of the written, spoken, and sung word shines through in all her projects.

Which brings us to this luminous new recording, whose title is borrowed from a poetry volume by Leonard Cohen. Souza is not the first to have been inspired by Cohen’s poetry, and his 2006 Book of Longing in particular. In 2007 Philip Glass created and recorded a song cycle of poems from it, with Cohen’s participation. Now Souza has set to music not only four poems by Cohen, but one each by three women poets—Emily Dickinson, Christina Rossetti, and Edna St. Vincent Millay—as well as three of her own.

To create the album’s mood of reflection and (as the title says) longing, Souza enlisted the talents of two of jazz’s most lyrical players, bassist Scott Colley and Brazilian guitarist Chico Pinheiro. She couldn’t have found better partners. Their sensitive playing and the simple configuration of bass, guitar, and percussion (handled by Souza) lets the words—and her warm, clear voice—lead the way.

The album begins with “These Things,” a beautifully crafted track, and my favorite here (if I had to pick one). An almost incantatory shuffle figure on bass and guitar, with a ringing harmonic note of emphasis, floats atop a percussion counterrhythm that ticks like a clock, ushering in Souza’s poetic meditation on words and time, choices and loss. “Daybreak” brings the Brazilian, with its slow bossa rhythm. Souza’s dreamily sung poem consists of single-word lines. It’s as if she has distilled the list-like lyric of Jobim’s masterpiece “Waters of March” (“Aguas de Março”) to life’s essences and elements. His “A stick, a stone, the end of the road” becomes her “Water/Snow/Oceans/Flow/Peace/Battles/Stay/Go.”

A delicate call and response between voice and instruments is used to great effect in Millay’s “Alms,” an elliptical rumination on giving and taking in love. The lovely guitar solo is perfectly placed, as if responding to the lines that it follows: “I loved the beggar that I fed / I cared for what he had to say.”

Cohen’s poem “Nightingale” is here titled “Night Song”—perhaps because it was previously set under its original name by singer/songwriter Anjani Thomas (and recorded on Cohen’s 2004 album Dear Heather). That earlier version, with its country feel and three-part harmony, would have fit perfectly on the soundtrack to the Coen brothers’ O Brother Where Art Thou. Souza underpins hers with an upbeat samba feel that suggests the flitting of bird flight, and her harmony shifts between major and melancholy minor, befitting Cohen’s lament at the loss of his nightingale/love: “Though you are singing somewhere still / I can no longer hear you.” Souza’s wordless vocals over the intro and outro evoke the elusive songbird. Here, as in all the album’s tunes, the organic interaction between Colley, Pinheiro, and Souza is a delight.

A high point in Luciana Souza’s career, a remarkable synthesis of words, Brazilian rhythms, and wordless vocals.Click To Tweet

Other standouts include Cohen’s allegory of love and artistic creation, “The Book of Longing,” retitled “The Book” and set as a lilting bossa nova. Souza’s own “Tonight” is a poem of difficult love, its ups and downs reflected in rhythmic contrasts, building to the cascading melody of the chorus; Pinheiro’s tuneful solo and Souza’s wordless vocals over the strings bring it home. Souza also does musical justice to the two more syntactically challenging poems—Emily Dickinson’s “We Grow Accustomed to the Dark,” and Rossetti’s “Remember.” Though Rossetti may not be the major poet that Dickinson is, her sonnet movingly addresses those left behind after loss of love, or life, with a wish to be remembered. In Souza’s hands, the poem becomes a gorgeous elegiac ballad, affectingly sung to the simplest chordal accompaniment.

The Book of Longing represents a high point in Souza’s stellar career, with its remarkable synthesis of her three beloved strands—words, Brazilian rhythms, and wordless vocals. Her formidable composing and arranging skills have never been more evident, and her own poems sit easily among those of the celebrated poets whose words she gathered here. Souza has created her own indelible “book”—of songs that ache and celebrate, muse and regret, dream and mourn.

Note: Luciana Souza will perform The Book of Longing, with guitarist Chico Pinheiro and bassist Scott Colley, at the Berklee Performance Center, 136 Massachusetts Ave., Boston, on November 9.  The renowned L.A.-based jazz/fusion band Yellowjackets is also on the bill; Souza appears on their newest album and will perform with them as well. Presented by the Celebrity Series of Boston.

Evelyn Rosenthal is a singer specializing in jazz and Brazilian music, a freelance editor, and the former editor in chief and head of publications at the Harvard Art Museums. She writes about musical theater and music for the Arts Fuse.