Summer Cannibals’ main virtue is its keen transmission of psychological warfare in families. 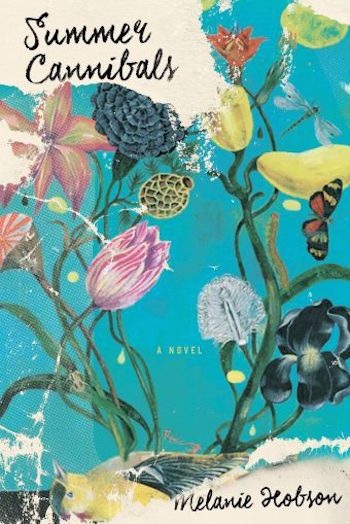 “The house had its way of holding them,” begins Summer Cannibals. Thus, despite its setting in Canada, Melanie Hobson’s debut novel attaches itself to the Gothic tradition of imposing houses and screwed-up families. None of the major characters in the novel are kind, or noble; none of them act out of motivations more virtuous than self-interest. For nearly 300 pages, they repeatedly and grotesquely collide with each other and with their own histories. As a reader, it may be difficult to look away.

The Blackford family—husband David, wife Margaret, and adult daughters Georgina, Jax, and Pippa—are terminally self-absorbed, unable to gaze beyond themselves and interact authentically with others. David is hilariously egocentric, emotionally and physically abusing his wife in the belief that it improves both of them, certain that every move he makes is the right one and everyone in the world is out to get him. Margaret dissociates worryingly from her daily life, but still passes on to her daughters some of the bullying she receives from her husband. Georgina is a classic older sister, trying to “keep things together” in unnecessary ways, echoing David in imposing her will. Jax is a fun-loving Floridian afflicted with housewife boredom and serious unresolved anger. Pippa, pregnant and clinically depressed when she arrives at the family house from her home in New Zealand, is coasting on years-old decisions both good and bad, at a crisis point in her marriage, lost in passivity.

As these five self-absorbed people bang into each other, like bumper cars, over six days, conflicts abound. Hobson’s achievement here is in setting up these personalities to entwine with and oppose each other so naturally. The majority of the book’s prose is in internal monologue — inner meditations on each person’s superiority, private angling for passive-aggressive advantage over the others:

Neither of them could summon the desire to speak. Not because there weren’t any new outrages to vocalize, because certainly there were, but because of all the old injuries whose cruelties were so great that they lay, always, just beneath whatever passed between them. And at times like this, they knew from experience, those grievances would overwhelm if given half a chance and neither of them could afford that because each had their hobby horse to ride, and neither wanted to surrender the lead—because each felt they had the upper hand.

This is a psychological novel, and it moves glacially, examining every motion and spoken word in exhaustive detail, drawing past injustices to the fore constantly. This isn’t a negative quality for some, but Summer Cannibals will infuriate readers with no interest in microscopic depictions of family dysfunction.

The plot is minor, compared to the novel’s emotional turmoil, and the narrative’s structure takes the form of the diptych. The first half of the book concerns a tour David has set up to show off the professional-level garden he has constructed around the all-important house. The tour goes badly wrong, but David finds a way to make it look as if the disastrous aspects were not his fault — and rebrands the occasion a success. After that reasonable opening, the second half of the book goes off the rails, growing hastier and more bizarre. An amoral young woman from the tour stays behind in a bedroom and becomes a sexual token passed between David and Margaret—a new, awful addition to their unhealthy dynamic. Meanwhile, Pippa wanders away from the house, Jax takes up with an old boyfriend, and Georgina discovers a family secret that shocks her. (This secret feels trivial compared to what else has passed between these characters.)

How willing the reader is to keep going through all this depends on her taste for melodrama. Hobson continues to ratchet the stakes upward until an infant’s life is in jeopardy, but readers may grow tired of the family’s diseased dynamic long before this point. By and large, the writing is well-tuned and graceful, if unadorned: “this, she felt, was what she needed. Not more composure. Not more pianola controlling the tempo of her life, automatic and error-free, its paper roll looping endlessly around the repeating holes of work and family.” Also, the juiciness of this story, with its Gothic overtones and symbolism, keeps it engaging. However, the conclusion is a major misstep: the book simply ends, nearly epiphany-free, smothering out some of its fires but supplying more oxygen to others. Hobson offers little real closure.

Summer Cannibals‘ main virtue is its keen transmission of psychological warfare in families. Readers from toxic families might not want to relive this kind of experience, but they might also be comforted. To quote a long-lost Tumblr user, “If you’ve never had someone angrily wash a dish at you or fold a sock in your direction then how are you gonna understand why I get nervous when you quietly do the laundry, or why I ask ‘are you mad at me?’ when you set the bag of groceries down too hard?” These are the kinds of exchanges that proliferate in Summer Cannibals. Anyone with a passive-aggressive relationship in her family will recognize herself in this book. Despite how unpleasant such relationships may be to live—or, potentially, to read about—that recognition can be a relief and a blessing.