You are here: Home / Books / Book Review: Richard A. Posner — A Rare Judge Who Tells Us How He Really Feels

Why didn’t a legal mind as brilliant as Richard Posner’s get to the Supreme Court? One suspects his candor and bluntness, things more likely to irritate than ingratiate. 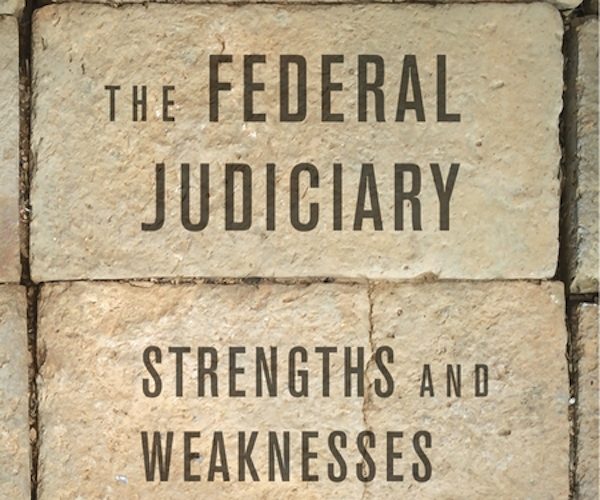 Traditionally, judges say and write little for general audiences, presumably saving their thunder for their judicial holdings and decrees. The assumption is that a judge’s neutrality is somehow preserved by not articulating views other than about those which pertain to the case in front of her or him. This is a pity. Plenty of our wisest old owls wear the black robes. Why restrain their tongues? There are exceptions: U.S. District Court Judge Jed S. Rakoff of New York is a frequent contributor to the New York Review of Books, opining on the death penalty, access to justice, and sentencing disparities. Because so many judges only write legal tomes, one sits up and takes notice when an exception comes along. Judges have ample time to consider the human condition, especially as it is dealt with in courts of law; why would we not want to hear more of what they think about the world?

Richard A. Posner of the 7th Circuit Court of Appeals based in Chicago is the rare example of a judge with much on his mind and a willingness to express it. His was the typical route to his job: brilliant student at Harvard Law, clerk to a Supreme Court Judge, work as a government attorney, law school professor, and then appointment to the bench. His latest book is a walk through what the federal courts and judges do and how well or poorly they perform. The United States Court of Appeals consists of twelve regional courts which hear appeals from federal district courts, the trial court where cases begin. Appeals court judges sit in panels, usually of three, but sometimes, for cases of great significance, all the judges in one circuit sit “en banc” to hear arguments.

To become an appellate judge, one does not need to have first been a trial judge; Posner is extremely critical of this arrangement. He feels judges who have not worked in the trenches have less than a full appreciation of the process. Appeals court judges may volunteer to sit and preside at trials; Posner does this, but most do not. He finds this deficiency in trial practice to be a serious limitation, pointing out that only one of the justices of the U.S. Supreme Court (SCOTUS), Sonia Sotomayor, had trial judge experience.

Posner argues that the snobbish track from elite law schools to the appellate bench narrows the hunt for candidates who might perform better. The truth is, the stamp of  a Harvard Law School trumps many other virtues a judge should possess. Five of the Supreme Court justices are Harvard Law School graduates, three are from Yale, and one, Ruth Bader Ginsburg, graduated from Columbia, although she spent her first year at Harvard before transferring. The late Chief Justice Warren Burger attended law school at night in Minnesota, extrapolate what you wish from that.

Appeals court justices have clerks, usually recent law school grads who serve a year or two to help with research and write drafts of the judges’ opinions. Posner feels judges should be required to write their own opinions and not rely on clerks. One of his reasons is that “…the principal benefit of requiring judges to write their own opinions, which has been completely overlooked, is that it would winnow out the weakest judges.” If writing were an integral part of judging, Posner believes, people who know they do not write well, or  who have trouble articulating their decisions, would not seek judicial appointment.

Posner does not think much of the industriousness of appellate judges: the summer break from hearing cases he feels is unjustified. A month is enough of a rest for anyone.

The Federal Judiciary is quick to name names in its survey of judges, starting with Antonin Scalia, with whom Posner taught law at the University of Chicago. Posner is generally thought to be a conservative, formed in the “economic analysis of law” of the Chicago school. But he takes issue with Scalia’s originalism. He also takes great exception to the waterfalls of praise that followed Scalia’s sudden death, much of it from people who were ideologically poles apart from him. Posner takes Harvard Law Professor Cass Sunstein to task for his effusive praise. “Justice Scalia was…one of the greatest justices in the Court’s history, and among its three best writers…”

Posner is as dismissive of this kind of encomium as he is of Scalia’s contribution to jurisprudence. “Scalia’s effort to sell the Court and the profession on ‘originalism’ was a flop…and as a writer of judicial opinions he was (certainly) outclassed …by John Marshall, Brandeis, Hughes, Cardozo, Black, Rehnquist, Roberts, and many others.”

Posner also criticizes Justice Elena Kagan for similarly describing Scalia as great, significant, and transformative. “Kagan sounds more like a breathless undergraduate than a Supreme Court Justice,” Posner writes in rebuke. He scornfully dismisses the-over-the-top hype as nothing more than Harvard Law School celebrating itself. No ideology can pierce the crimson veil it seems.

To sum up, his assessment of the today’s SCOTUS “…is that the current Court is a very political place, also not well managed, and that the current set of justices is deficient in educational and career and even geographical diversity, deficient in understanding science and technology, virtually bereft of trial experience, not good team players, underworked, and in some respects…ethically challenged.” Wow, your honor; tell us how you really feel.

Federal judges hold office for life, but Posner argues for term limits and/or mandatory retirement at a certain age. “A number of federal judges and justices have remained in office beyond their ‘sell-by’ date, usually owing to physical or mental impairment.” He argues that age eighty would be a good line to draw, notwithstanding the fact that some judges have performed with distinction beyond that time.

Posner spends time on recent cases, such as same sex marriage, which he originally opposed but later came to accept under the equal protection clause of the constitution. As a judge, has shown the an admirable capacity to evolve, accepting better reasoning than than clinging to tradition or habit.

Much of the book deals with matters only lawyers would appreciate, such as ideas on rules of procedure and the famous “hearsay rule and its exceptions.” Nonetheless the book is an interesting and boldly written tour of the judicial branch of the federal government.

Why didn’t a legal mind as brilliant as Posner’s get to the Supreme Court? One suspects the culprits are his candor and bluntness, things more likely to irritate than ingratiate. Posner has been identified by many as the legal scholar most quoted by others, which is no small distinction. He is to be praised not only for having something to say, but not feeling the black robes disqualify him from participating in debates in the public square; a good judge is disinterested, not disengaged.

Thomas Filbin is a lawyer and freelance book critic.