You are here: Home / Featured / Jazz CD Review: “Hudson” — Free Jazz in the Summer of Love 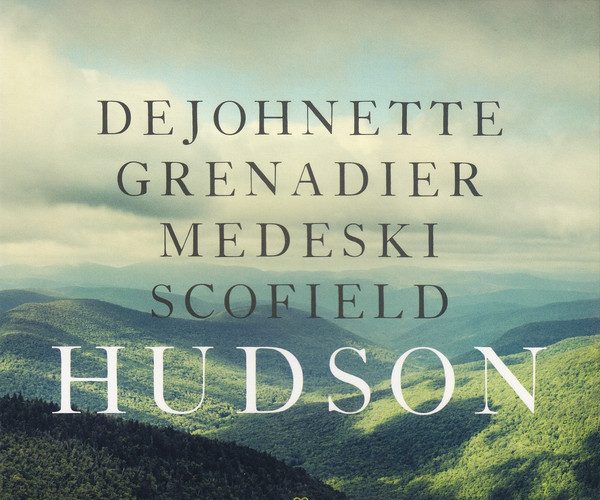 According to guitarist John Scofield, the name of this quartet of jazz stars may have been (he isn’t sure) chosen by his wife Susan. The idea behind the session was simple: “To take songs from the Woodstock era and groups who lived near Woodstock along with tunes by artists who are connected with the area, like Bob Dylan and The Band and artists who played at the Woodstock Festival, such as Jimi Hendrix. A lot of the material is chosen from that golden era of rock and roll; the songs are easy enough that you can make them go where you want.” Scofield purports to love these songs (“even when we screwed them up, he confesses), tunes such as Joni Mitchell’s “Woodstock,” Jimi Hendrix’s “Wait Until Tomorrow” (from Axis: Bold as Love) and The Band’s “Up on Cripple Creek.” The quartet’s challenge: that it could even adapt “Lay Lay Lay” to its free-wheeling improvisatory sensibilities.

The album begins, not with tunes by Dylan or Mitchell, but with the group improvisation on the title cut, “Hudson.” First we hear an eerie vibration from John Medeski’s synthesizer, then a funky bass line by Larry Grenadier. Drummer DeJohnette enters with a characteristically interesting pattern, complete with backbeat, and Scofield finally joins in and adds some pungent, fragmented lines over the whole. Everyone contributes to, and works toward, the final groove. “Hudson” resonates with the skitter-ish nature of Miles Davis’ jams, though Medeski’s electronic sounds along with Scofield’s intense replies and blithe quotations strive for a more balanced effect. The band then performs Scofield’s “El Swing,” which is, as the title suggests, is a consistently swinging piece.

Scofield claims that, even when he is twisting and re-inventing songs by Mitchell, Dylan, and others, he is listening to the originals, subconsciously. After the rhythm section plays a dark-sounding introduction, Scofield directly states “Woodstock”‘s melody. Joni Mitchell’s version on Ladies of the Canyon came gloriously to mind before disappearing into the spontaneous musical ether. And it is the guitarist again who mimics Dylan’s vocals on “A Hard Rain’s a-Gonna Fall,” before he immediately goes outside the chord structure to improvise freely with the quartet. That’s the joy of so much of this set: we hear familiar melodies in unfamiliar ways, and we also experience group improvisations fashioned/collaborated by four masters. Medeski is featured on acoustic piano in the raggy version of “Up on Cripple Creek.”

At this point in his career, DeJohnette rarely takes drum solos. (He did in the late sixties, when I first saw him perform with Miles Davis.) He makes his mark on Hudson in another way, serving as an inventive accompanist, playfully commenting on the band’s performances, suppling incisive and suggestive accents. Scofield pays tribute to the drummer with his tune “Tony Then Jack.” (DeJohnette followed Tony Williams in the Miles Davis quintet.) The drummer is also present as the composer of three pieces: “Dirty Ground,” with its folksy vocal; “Song for World Forgiveness”; and the climactic piece, “Great Spirit Peace Chant,” a tribute to the spirituality of native Americans. Hudson, then, should not be dismissed as a marketing ploy, an attempt to tap into ’60s nostalgia. It’s varied, fresh, and exciting free jazz that imaginatively draws on rock, funky blues, and folk music. It is an apt homage to the summer of love.