You are here: Home / Books / Book Review: “The Girl at the Baggage Claim” – An Exploration of Avocado Pits and In(ter)dependent Selves

What could easily have become a dense, jargon-filled work of cultural psychology instead reads like a thoughtful conversation. 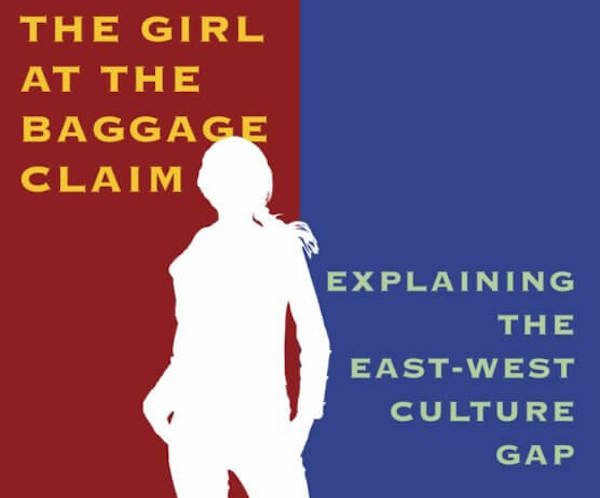 Gish Jen, a writer primarily known for her fiction, has forayed for a second time into the realm of non-fiction with The Girl at the Baggage Claim: Explaining the East-West Culture Gap. Luckily for readers, Jen’s lively prose and accessible, sometimes humorous voice is very much present in this book: what could easily have become a dense, jargon-filled work of social and cultural psychology instead reads like a thoughtful conversation about different understandings of the self and how those understandings shape individuals’ and societies’ world views on everything from business to family and even art. In fact, art features prominently throughout the book, as Jen acknowledges early on that her own background as an American-born daughter of Chinese immigrants and her work as a novelist influences the book in two main ways: a majority of her examples are drawn from art and literature (although many also come from psychology, business, and education), and there is a strong focus on China and the United States. Despite this somewhat narrow scope, the book’s implications easily move beyond the arts and these geographical boundaries.

The book’s central focus is on the differences between what Jen calls the “big pit self” and the “flexi-self.” She explains, “one is a self found in individualistic societies – a self we may envision as a kind of avocado, replete with a big pit on which it is focused. Called the ‘independent’ self by psychologists, this is a self we will also refer to by our own informal term, the ‘big pit self.’ That is to distinguish it from the ‘interdependent’ self, which is far more embedded in, attuned to, and accommodating of its context – the ‘flexi-self’ often found in collectivist societies.” From there, she’s off and running on her exploration of the ways these two kinds of selves operate – an exploration that covers a tremendous amount of ground. Across the text, Jen highlights differences between big pit selves’ and flexi-selves’ worldviews concerning the individual and the community, creativity and genius, and education and intelligence. Along the way, she tries to debunk a number of cultural stereotypes about Asians, since the text’s intended audience is a Western one.

At times, her attempts to confront stereotypes walk a dangerously fine line between dismantling and reinforcing – and I don’t think she’s always successful. For instance, during a larger discussion of the big pit’s obsession with individual genius (think Steve Jobs and Bill Gates) she argues that, contrary to popular opinion in the West, the Chinese do, in fact, innovate. Then she adds, “At the same time, the Chinese themselves are aware that their style of innovation differs from that of the West, and that, however exuberant and successful, it is not the sort that wins Nobel Prizes.” She follows that up by stating, “divergent thinking is singularly difficult for a flexi-self.” While I take her larger points in this section – points about goal-oriented thought and pattern-seeking behavior – it’s hard to read passages like this one as doing much in terms of disrupting the harmful ideas they point out. To be fair, there are many times when Jen’s work does disrupt stereotypes – most especially in her discussions concerning education. In these instances, her own experiences as a professor help to humanize her subjects and add depth to her larger claims about study habits, plagiarism, and grades.

I mentioned before that the book’s language is engaging, which makes it easy to grasp some of Jens’ more complex ideas. Beyond the language, the structure of the text makes for a smooth read. Like any good writer, Jen defines her core concepts in the relatively short opening section, “We Edit the World.” The longest section of the book, “The Flexi-Self,” comes next, and it focuses on Eastern flexi-self interdependence and its many potential benefits (and some pitfalls) that may defy a Western audience’s preconceived notions – for if, as Jen argues throughout this book, Westerners value their individuality over almost all else, then it may be difficult for some readers to consider the benefits of some aspects of flexi-self culture, such as perfecting the art of copying (something Jen connects with the Eastern valuation of “mastery” over the Western obsession with “genius”).

The shortest section, “The Big Pit Self,” follows, underscoring some of the downsides of big-pit-self independence, with special attention given to its impact on happiness and social structure. Personally, I love the irony of the big pit section being the shortest in the book, especially in light of Jen’s point that big pit selves enjoy nothing more than to talk about themselves. It strikes me that where her directness about stereotypes sometimes seemed to demean Asians in the previous section, her directness about flaws is extremely effective at bringing big pits back down to earth in this section. As an example, at one point she hones in on what she diplomatically calls “perceptual biases” fostered by individualism, wherein big pits just can’t seem to separate factual knowledge from their own inaccurate perceptions of a situation. A little later, she spends some time unraveling ideas that individualistic types are somehow immune to outside influences, illustrating just how suggestible big pits really are – contrary to what they’d like to believe of themselves.

The final section, “Meetings and Mixings,” was the most interesting to me because that’s where Jen posits that a blend of flexi-self and big pit self – what she calls “ambidependence” – is best. Bringing together a multitude of key examples from across the book, she looks at what a balance between interdependence and independence could mean for everything from childrearing to professional sports to altruism and even video games. It’s a little bit of a predictable “Goldilocks” move, but it also rings true. That being said, I have to wonder how my own positionality comes into play in my reading; throughout the book, Jen drops little footnotes and one-liners about how “Asian Americans tend to test in the middle of the flexi-self-to-big-pit-self spectrum.” As an Asian American, I find myself questioning the extent to which my potential ambidependence influenced my responses to Jen’s ideas. If I were a non-Asian American raised in the United States, would I find some of these ideas harder to stomach? There’s no way to know, but the question is worth asking.

At the end of the day, there is only one aspect of this book that I found disappointing: the lack of critical attention given to the ideas of “East” and “West.” While Jen mentions in her Preface that “paradoxically, whether or not there is an ‘East’ or a ‘West,’ exactly, there is still an East-West culture gap,” that’s all she ever says about these constructs. Given their centrality to the entire book’s premise, I found Jen’s use of “East” and “West” a little problematic, especially since she uses them somewhat uncritically to denote both geographical regions and cultural categories (sometimes simultaneously).

Despite that compliant, The Girl at the Baggage Claim is a fun and thought-provoking read. The volume raised a number of questions that led to interesting conversations with friends and family. The book also made me think about something I typically take for granted – the importance of having a big, fat, unique, quirky avocado pit – in a completely different light. I especially enjoyed the way Jen took a concept like “interdependence” (which, as she points out, most Westerners find somewhat distasteful) and revealed its merit and beauty. The book concludes by returning to its opening scenario: that of an Asian girl who applied to a prestigious private school, was enthusiastically accepted, and pulled a bait-and-switch so that the girl who arrives in her place – the titular girl at the baggage claim – is a different person altogether (the original applicant’s far-less-qualified sister). In the Epilogue, Jen’s roots as a fiction writer show through most strongly as she wonders what happened to the girl at the baggage claim, imagining all the ways in which life among the big pits in the United States might have changed her – in other words, Jen speculates about how the merging of flexi-self and big pit self might create the opportunity for a happy ending to this bizarre tale.

Anne Mai Yee Jansen is an assistant professor of multiethnic literatures and U.S. ethnic studies at the University of North Carolina at Asheville.