You are here: Home / Books / Book Review: “Curtains?” — Grim But Valuable Truths about the Future of the Arts in America.

Curtains? is not entirely satisfying, but I’ll give Michael M. Kaiser points for honesty, clarity, and for not dodging uncomfortable truths. 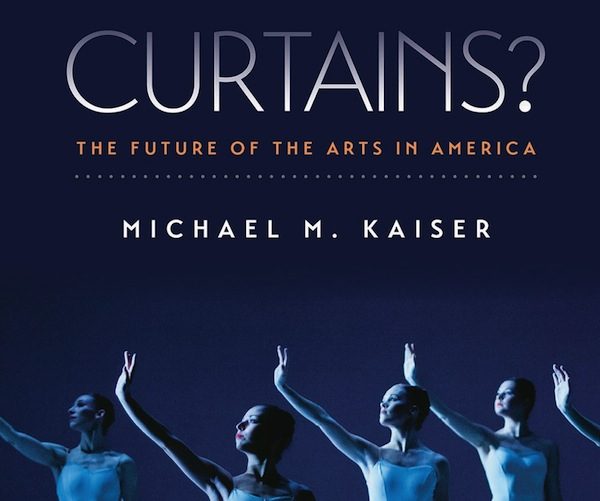 Crisp, pragmatic and genial, Michael M. Kaiser smiles earnestly from the jacket photo of his new book, the latest in a series on how to adapt to the changing landscape of 21st century culture. A longtime arts manager – he’s helmed the Kennedy Center, the Alvin Ailey Dance Company, and Britain’s Royal Opera House – with a reputation for turning around troubled cultural institutions, this neck-tied gentleman seems likely to regale us with the usual get-with-it-folks pep talk of neoliberal, corporate-model board presidents: Sure, there are “challenges” to today’s arts world, but it’s nothing “efficiency,” “innovation,” “knowing your audience,” “branding,” and other sorts of bootstrapping can’t solve. No less than three of his books have “practical” in their subtitles, and the very name of the new book — Curtains? The Future of the Arts in America – seems to shrug off any serious storm clouds.

But we’re not even two dozen pages in when a fairly bleak assessment arrives: The half-century after World War II, he writes, saw a steady and vigorous expansion of cultural offerings, arts institutions, and audiences — a burgeoning that’s been followed by:

economic instability, the Internet explosion, the death of the recording industry, the near-death of subscriptions, the renewed focus on STEM (science, technology, engineering, and math) and resulting swoon in the liberal arts, the introduction of movie-theater opera, the erosion of newspaper readership and its threat to serious arts criticism, the aging of the donor base, the raiding of endowments, and the search for ‘new models.’

And what he calls “fundamental shifts in the arts ecology” have led to dead-serious results: The demolition or severe damaging – all in a brief window of time – of the New York City Opera, Minnesota Orchestra, San Francisco Symphony, Miami City Ballet, and on and on.

Here’s the place where the reviewer jumps in and denounces the author for being gloomy, pessimistic, dystopian, or “nostalgic,” but I’ll resist that impulse. Curtains? is not entirely satisfying, but I’ll give Kaiser points for honesty, clarity, and for not dodging uncomfortable truths. Grim books about the arts are not easy to find, or to produce or publish: when I was shopping around the proposal for what became Culture Crash: The Killing of the Creative Class, I was told by one agent that no one wanted “bad news books,” especially during the recession. Numerous newspaper and magazine editors turned down story ideas about some of the disheartening topics Kaiser and I are interested in; editors often see the arts pages as opportunities for something “uplifting.” And I was told over and over again, by scholars and scribes who read or reviewed my book, that these changes are inevitable, that it’s not worth crying over these entitled babies in the world of culture, and so on.

Kaiser’s view, then, is sharper and truer than most of those who look at the state of the arts. He assesses it all as an ecology: The book is not just about a handful of institutions or a few favorite genres, but at the way arts education, generational values, social norms, press coverage, public funding (or lack thereof), technology, etc. all fit together, and how a change in one can echo across the others.

He’s sober and unsentimental as he looks toward to future. Almost half of this short book speculates about the world of culture in 2035, asking, What happens, then, if we do nothing? As he contemplates the maturing of the “second generation of children without substantial arts education in the schools,” he sees a number of unpleasant developments. Skyrocketing ticket prices, the loss of mid-sizes arts organizations, falling compensation for artists (an “unfortunate combination of an expensive education with few opportunities for employment”), fewer gatekeepers in the press, a growing emphasis on the tastes of donors and the needs of marketers that diminished genuinely challenging fare, less work aimed at racial and ethnic minorities, a continued decline in people taking in live arts performances (in public spaces rather than one their laptop or smartphone), and an increased attention to fundraising as the tail wags the dog. Overall, then, “a far higher degree of electronic distribution, to an audience less well educated in the arts.” Quite possibly, “the arts will come to mean something reserved only for the wealthy, like yachts or equestrian sports.”

It all sounds rather grim. But for those paying attention in 2015, pretty persuasive: This is just a hard-headed extrapolation from existing trends. Kaiser doesn’t revel in the gloom; in fact, his tone is somewhere between technocratic and slightly chipper despite the bad news. (At times he is sober to the point of bloodless.) It’s clear he’s thought about these contours and shifts quite deeply.

The book’s most mixed section is its closing chapter, “Toward a Brighter Future – Or Not.” There is some good material in here, especially where he considers the success of groups like the Mark Morris Dance group or Brooklyn Academy of Music, and arts leaders like Deborah Bora of the Los Angeles Philharmonic or the British Museum’s Neil MacGregor. His argument for a cabinet-level culture position in Washington is persuasive. But some of his suggestions — that artists and arts companies just need to get with it and put on exciting work – are a strange mix of naïve and Social Darwinist. And to suggest that culture presenters become more like movie studios – in a time when the studios are besotted by superhero movies and sequels, lack financial stability, and spend tens of millions of dollars marketing each film – is just bizarre.

Proposing solutions to carry us through the perfect storm of today’s arts world is not easy. (As someone who’s just written a book a little like this one, I know it all too well.) In an era essayist Richard Rodriguez calls the Age of the Engineer, where Steve Jobs is our day’s John Lennon, we expect things to be solved immediately – but there’s no $3.99 app for the collapse of the arts ecology. As Kaiser points out, it’s not the economy, stupid. (Or at least, not just the economy.) There are many causes, and some of them go back many decades and have to do with broad global economic and technological shifts. At the very least, with no widespread arts education, the topsoil has been blown off.

The book’s other drawback is one of tone: Kaiser is an arts manager, not a poet or polemicist, but some of Curtains? could use a soul injection. It’s not just his writing style, which is clear but characterless. It’s the attitude he expresses toward culture in general. I have no doubt that a man who devotes his life to the arts has a genuine passion for them. But it’s only near book’s end, where he talks about the Peter Brook production of a Midsummer Night’s Dream that he saw (repeatedly) in high school that we get a firm sense that this is not just some kind of entrepreneurial challenge that McKinsey & Co. could handle.

The fact is, culture is different, at least in some crucial ways, from making car parts or metal ladders. “When I use the term ‘industry’ to describe us in the classes I teach, I frequently get an unpleasant reaction,” he writes. Well, yeah. Similarly, he rejects what he calls ”the moral argument” for culture: “we believe that the arts should have a place in our communities, that artists should be supported, and that arts education should be available in all schools, because we believe that the arts are good for us.” Surely people like him need to, as he says, “talk in the language of business” when they engage with donors and other civilians. But if the arts have no extra-market meaning – and if culture lovers who head arts institutions can’t stand up for their meaning and value and transcendent quality – then we really are in trouble.

Scott Timberg, author of Culture Crash: The Killing of the Creative Class, is a former arts reporter for the Los Angeles Times. He writes on music and culture and contributes to Salon and The New York Times. He runs ArtsJournal’s “Culture Crash” blog and lives in Los Angeles.