You are here: Home / Featured / Book Review: Before, During, and After — A Look Back at Patriotic and Paranoid American Cinema

Informative new books look at a pair of tumultuous periods in American history — the Second World War and the Cold War — when Hollywood rode a particularly rocky political roller coaster.

Film Criticism, The Cold War, and the Blacklist: Reading the Hollywood Reds, by Jeff Smith. University of California Press, 358 pages, $34.95.

American Cinema braved both a World War and a Cold War in quick succession, and these years were chaotic and politically charged, to say the least. In a span of only a few decades after the rise of sound, thanks to an influx of screenwriters in Los Angeles, many of whom came from the opposite coast, Hollywood was able to engage in politics and world affairs in an entirely new fashion. And so they did, in the limited way in which they could, given the fears of losing foreign markets, the restrictions of a production code, and the endemic desire for profit. Two new books look at these tumultuous years when Hollywood rode a particularly rocky political roller coaster. Through trials and hearings that found the industry accused of creating propaganda (a bad thing), to being asked to make propaganda by the government (a good thing), to celebrating our ally Russia (a good thing), to celebrating Communism (a bad thing). It is, like much of the witch-hunting of the era, a dizzyingly convoluted story.

Mark Harris’s Five Came Back covers the war years, focusing on five of Hollywood’s most famous directors, each of whom made their way across the globe to create documentaries for the United States government. From the Aleutian Islands in Alaska to the skies over France, the Battle of Midway to the Battle of San Pietro, these directors helped capture, or skillfully restage, some of the greatest combat footage the American public had ever seen, radically altering the way that we see war and cinema. They did it because they were patriots, because they wanted a taste of adventure, and because they honestly believed they could help the war effort. In his volume, Harris chronicles the wartime work of John Ford, Frank Capra, William Wyler, John Huston, and George Stevens. These fascinating experiences could and should have been written about sixty years ago, although it may seem that every story generated by the “Good War” has been told. The author sheds some valuable light on the often tense relationships that these adventure-seeking patriots had with the government, which was trying to explain the war to an often skeptical or uninformed public.

A fair amount of this story has already been told. Joseph McBride’s biographies of Ford and Capra go over this ground. Huston and Capra both wrote entertaining,if self-aggrandizing autobiographies. And there are already some excellent studies on Hollywood during the war years, most notably Thomas Doherty’s Projections of War, Clayton R. Koppes and Gregory D. Black’s Hollywood Goes to War, and Jeanine Basinger’s The World War II Combat Film. But Harris’s focus on the group makes this book worthwhile and, in the end, a valuable addition to an ever-growing library of books on World War II. 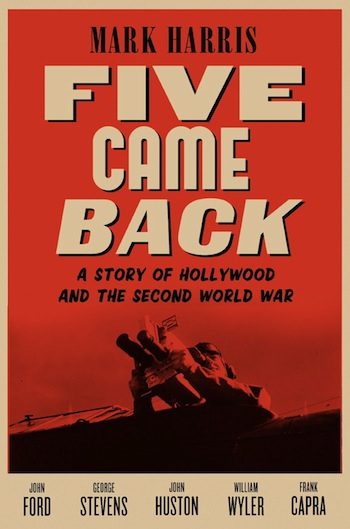 Making his way through the political tensions and production histories of the films that preceded the directors’ entry into government service, Harris leaves plenty of room to critique the hypocrisy (and shameful legacy) of HUAC as well as point out the timidity and the anti-Nazi fervor of the studio heads. Of all the filmmakers, Harris is clearly less impressed with Capra’s films, or at least their muddled politics, which reflect the director’s own confusing love/hate relationship with the masses. Whether it is Meet John Doe or Mr. Smith Goes to Washington, the affection and distrust Capra has for the little guy is always problematic, especially at the ends of his films. Yet Harris finds his Why We Fight series to be vital to the story, showing how, from Washington D.C. and L.A., the director of “Capracorn” was able to craft a series of films dedicated to helping the public understand the war and themselves a little bit more. Arguably, it was one of the last great projects of his career, the commercial failure of It’s a Wonderful Life effectively stalling what might have been a great last act. Huston is envisioned as a womanizing adventurer, much as he has been portrayed elsewhere. In fact, the young screenwriter-turned-director created documentaries that cut so close to the heart of the pains of war that they had trouble finding release, or were banned outright, such as Let There Be Light, an early look at PTSD and how it affected soldiers returning from the war. That film, unseen by the public until the 1980s, remains a sobering look at the troubling legacy of conflict.

Some of them were injured during their service. Ford was hit with shrapnel as he filmed part of the Battle of Midway. William Wyler damaged his hearing while lying on the bottom of a B-17 bomber with a small film crew. The war came just as some of their careers were winding down (Capra), and others were just starting to heat up, (Huston and Stevens). In Ford’s case, he left Hollywood after making an amazing string of films. In the span of barely two years before American involvement in the war, Ford directed Stagecoach, Young Mr. Lincoln, Drums Along the Mohawk, The Long Voyage Home, The Grapes of Wrath, and How Green Was My Valley. At the peak of his power, he walked away for a new adventure. He offered his yacht, the Araner, for Navy intelligence patrols (and also as a means to go off on benders).

Each man’s initial response to war and the call to arms was different. Some jumped in early while others waited until their convictions solidified around the Allied cause. Each had much to offer, and did so when they really did not have to take on the responsibility. Theirs is a fascinating story, and Harris nimbly grounds their adventures in the era’s political and cultural unease, amid the Hollywood hype and the maneuvers of power brokers. 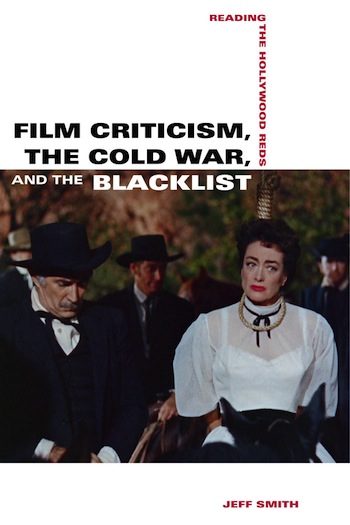 Jeff Smith’s book, Film Criticism, The Cold War, and the Blacklist: Reading the Hollywood Reds focuses on the years after the war ended and the Cold War began. This too is well-trod ground, so much so that Smith’s introduction asks the question outright, “What more can be said about the Hollywood Blacklist?” It turns out that a fair amount can still be gleaned from the films of the era, if examined through a different lens. The author’s goal here is not to go over the historical material for the umpteenth time, but to explore alternative critical analyses (and cultural perceptions) of many of the films that we can instantly call to mind when we think of the era. On the Waterfront, High Noon, and Invasion of the Body Snatchers — these movies are markers of a specific moment in Hollywood’s history, and all of them present various Cold War allegories. Using Reception Studies as the framework for his text, Smith breaks down each, complete with charts depicting just how, for example, in On the Waterfront, Terry = Elia Kazan if the film is understood as a blacklist allegory, but when the scenario is Terry = an “unfriendly witness” the story is seen as an anti-HUAC allegory.

The method works, providing a somewhat fresh view, if not always of the films, then of the way critics and scholars have shaped discussions over time. Waterfront, of course, remains front and center here here, with Kazan’s role as a political figure, namer of names, and brilliant filmmaker inspiring a complicated take on the multi-faceted story of union breaking on the docks of New York. Plagues, sheriffs, aliens, monsters, and unions — all of these characters and forces are examined in-depth in this book. The result is that the Blacklist becomes a mutable event, the clashing perceptions of different groups transformed by the imagination of the cinema and those who write about it.

Film reviewers have a stake in this kind of complicated discussion. Reception Studies, rooted in the belief that film critics and scholars are instrumental in helping to shape our understanding and memory of Hollywood’s output is a welcome approach, validating not only the efficacy of interpretation but of criticism in general. Both Smith and Harris prove that the 1940s and 50s remain a fertile period for inquiry. But these books also remind us of a time when politics was a dangerous game in Hollywood, when filmmakers fought for democracy with their work, challenged our perceptions, and created powerful cinematic experiences. As Smith turns toward the present at the end of his book, we may all take stock in our current American film-going experience and ask: are we being challenged in the same way?