A fast-paced, fact-laden book by two “Boston Globe” reporters about the 2013 Boston Marathon bombings that doesn’t answer the tough questions. 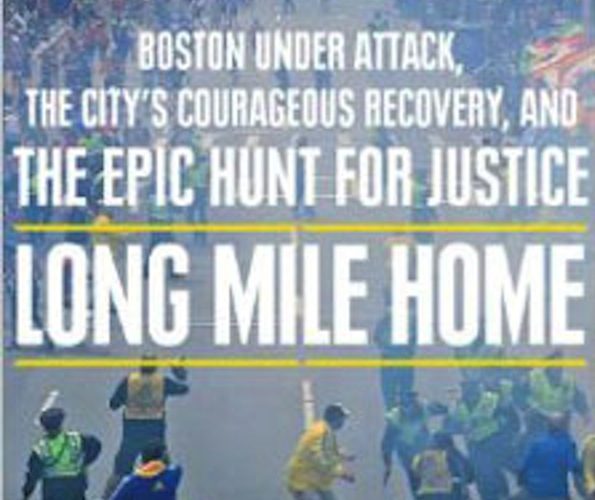 Shortly before 10 a.m on April 15, 2013, Dr. David King, a trauma surgeon and accomplished runner, waited near the starting line of the 117th Boston Marathon. Anticipating the starter’s pistol, King and hundreds of other participants activated the GPS on their watches — “the chirps from their gadgets filling the air as if they stood in a summer meadow full of crickets.”

Hours later, after two bombs had exploded near the finish line of the marathon, scattering deadly shrapnel, setting off widespread panic, and killing three bystanders, longtime race organizer Dave McGillivray helped gather hundreds of bags containing runners’ personal items that had been left behind. He could hear cellphones ringing inside the yellow race bags, as family members and friends tried to reach their loved ones. Still in shock over what he’d witnessed, McGillivray “listened to the phones singing in the darkness, a melancholy sound track to (his) solemn labor.”

This is one of several eerie juxtapositions in Boston Globe reporters Scott Helman and Jenna Russell’s fast-paced, fact laden book about the 2013 Boston Marathon bombings. In the aftermath, sirens rang out from every quarter and police launched a protracted and costly hunt to identify and capture the two suspects, 27-year-old Tamerlan Tsarnaev and his 19-year-old brother Dzhokhar. This version of the story includes a raft of surprising details, including the “swarms of … rodents” that infested downtown businesses that were cordoned off for safety reasons; the day, months later, that Boston police officer Shana Cottone, one of many first responders who struggled with her memories of the event, discovered an unexploded (and unrelated) bomb in East Boston; and the first sign of normalcy after an anxious week, as panhandlers returned to Boylston Street.

The authors focus on the tragedy from the perspectives of King, McGillivray, Cottone, spectator Heather Abbott, and victim Krystle Campbell. In such a huge, tangled story, the choice of subjects becomes your organizing principle; therefore, you must choose wisely and employ your shifting point of view strategically. Ideally, there should be a structural purpose to these visitations and re-visitations, though oftentimes here the drop-ins on these characters can seem random: oh, it’s time to mention Dr. King again. The authors also have trouble building the tension necessary to propel the arc of their story, and then, ironically, they skim over the most important event: the bombing itself. No detailed narrative rendering of the actual explosions appears in the book, which is either a significant oversight or an editorial misstep.

There’s another serious problem of omission in Long Mile Home. Throughout Helman and Russell’s reporting, there’s a whiff of indecisiveness when it comes to their evaluation of critical judgment calls by law enforcement — the latter undoubtedly triggered by the inter-agency competition and jealousy that has long haunted Boston. For example, they describe what occurred when the Tsarnaev brothers were spotted by an alert Watertown cop just a short time after executing MIT police officer Sean Collier, taking a hostage, and hijacking the man’s car. The patrol officer radioed his supervisor and, within minutes, dozens of cops from across the region barreled into Watertown. What ensued has been described by some as an ill-advised, nightmarish crossfire where more than 250 rounds were exchanged; Tamerlan Tsarnaev was shot multiple times and then run over by his fleeing brother; and 33-year-old MBTA police officer Richard Donohue was grievously wounded, most likely by an errant round fired by another cop. The authors imply — though never state — that the chaos was the result of poor decisions (or the lack of them) by law enforcement supervisors at the scene.

In fact, many key questions are left unexamined here. What did the federal government know about the Tsarnaevs before the attack, and whom did they tell? Which law enforcement agency had jurisdiction, and which department/individual should’ve taken charge of the firefight in Watertown that left Tamerlan Tsarnaev dead and an MBTA cop fighting for his life? What agency and which supervisor had the ultimate authority when Dzhokhar Tsarnaev was discovered hiding in a boat, and where police endangered one another and local residents by opening fire without an express command to do so?

By all accounts, rank and file cops were enterprising, professional, and vigilant throughout this ordeal. But if supervisory errors were made, the authors have a obligation to investigate them in order to get the story right. In a town like Boston, where reporters often encounter the people they’ve written about, it is not easy to venture into the dark corners of the story, especially a complex tragedy like the Marathon bombing. Answering the tough questions will be left to other authors, and to the additional books on this subject that are sure to follow.

Jay Atkinson is the author of seven books, including Legends of Winter Hill: Cops, Con Men, and Joe McCain, the Last Real Detective. Follow him on Twitter@atkinson_jay