In the heartrending “Three Strong Women,” award-winning novelist Marie NDiaye infuses her Senegalese women characters with a personal sense of dignity and a strong belief in self.

This novel won its author the prestigious and highly coveted Prix Goncourt in 2009 by a vote of five to two of the members of the Goncourt Academy. My brother-in-law, Michel Tournier, won this same prize in 1970 for his novel Le Roi des Aulnes (The Ogre) and is one of the members of this academy, which made me particularly interested in reading and reviewing this volume, the first written by a black woman to be awarded the Prix Goncourt.

Born in France to a French mother and an absentee, Senegalese father, Ms. NDiaye began writing at age 12 and was first published at 18. Her book Rosie Carpe previously won her the Fémina literary prize in 2001. She also collaborated on the script, directed by Claire Denis, of the film White Material, which is set in an unspecified country in Africa. She has been living in Berlin with her companion and three children because of her strong disapproval of Nicolas Sarkozy’s right-wing government.

In Three Strong Women, Ms. NDiaye infuses her Senegalese women characters with a personal sense of dignity and a strong belief in self. Yet her writing combines this illuminating psychological perspective with a mystical element that explores religious themes. The book’s distinctive magic realism focuses on surreal transformations that revolve around bird imagery, ranging from characters perching in trees to aggressive buzzards attacking a protagonist to mysterious, black crows. Realism is artfully blended with a fantasy iconology that relates to African cultural beliefs.

The book is written in three distinct parts, which still somehow intersect in subtle ways to describe the complex plight of three West African women. The first is Norah, a lawyer by profession, who returns to Dakar at her reprehensible father’s behest without knowing why he has summoned her after having rejected her, her older sister, and their mother. He also kidnapped her younger, five-year-old brother many years earlier. Norah’s journey is therefore that of a daughter, mother -— she herself has a child from a failed marriage —- and sister. Her legal training enters into play when it is finally revealed that she has been told to come at her father’s bidding in order to defend her now adult brother, who is accused of murder. 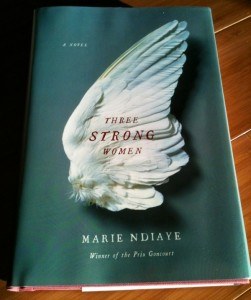 The second and longest part is about Fanta, a teacher of French literature, who married a white man, Rudy. For reasons related to a crime committed by her father-in-law, Fanta is expelled from her homeland and forced to live with Rudy in southern France where her teaching degree is not valid. Her story is told, memorably, via her husband’s guilt-ridden and somewhat manic voice. His verbally abusive treatment towards her, as well as his seething rage at his life’s failures, force Fanta to retreat into a resentful muteness. The clipping of Fanta’s graceful “wings,” to which Rudy often refers and which he initially so admired, has left her listless and disillusioned, ready to take him up on his insulting offer to take their son and go “back to where she [comes] from.”

Khady Demba’s story is the third and probably the most painful part of Three Strong Women. Left childless and widowed after three years of marriage, she is thrown out by her deceased husband’s family, which does not relish an extra mouth to feed. She is told to go live in France with her distant cousin, the above-mentioned Fanta. The arduous journey towards this alledged European ‘haven’ becomes one of unspeakable physical suffering and moral degradation. However, the simple fact that two people -— her grandmother and her husband -— once loved her, creates within her a strong, solid core of resilience that helps Khady to survive, against all odds, at least until the novel’s horrific dénouement.

Translator John Fletcher has chosen to translate the original title Trois Femmes Puissantes as Three Strong Women, rather than using the literal translation of the French adjective puissant, which is “powerful.” This is fitting because there is hardly any conventional potency to be found in these very touching and tragic destinies which, according to the author, mirror the experience of many West African women; and yet their inner strength shines through on every page. The heartrending stories of these three women who inhabit a culture so different from our own are masterfully told by Ms. NDiaye in a way that will strike a compelling chord in the hearts of daughters, wives, and mothers everywhere.