You are here: Home / Books / Book Review: “When the Night” — A Memorably Icy Love Story

In spare, exact prose Cristina Comencini lets this story unfold against an Alpine setting that is so vivid it, too, becomes a character in this strangely compelling novel. 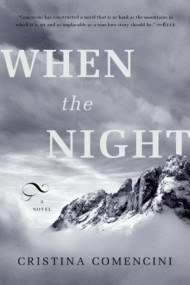 Sometimes a book comes along that startles you into realizing—again, and happily—how powerful good fiction can be. When I started When The Night, I was almost repelled by the two main characters who seem so utterly uncomfortable in the world. There is Manfred, stubborn beyond all imagining, still haunted by memories of his wife Luna who has left him and taken their two children Simon and Clara (exactly as his mother left him and his father and two brothers a generation before).

And there is Marina, the most reluctant mother I have come across since I read Christina Stead, who has come to the Dolomites with her two-year-old boy, Marco, and rented Manfred’s upstairs apartment in an unnamed, Italian village. Although she has tried to love this little boy, she seems to be totally defeated and tells us straight off, “As soon as he came out of me, I looked at him and thought, I can’t do it.” Moreover, there are all these characters whose names begin with Ma—Manfred, Marina and her child Marco and her husband, Mario—which only added to my exasperation.

But Comencini knows her craft and has written several novels and directed and written prize-winning films (including a 2011 movie version, which she also directed, of this novel). In spare, exact prose she lets this story unfold against an Alpine setting that is so vivid it, too, becomes a character in this strangely compelling book. The attraction between these two people who initially don’t like each other begins to have an edge as sharp as the winter, Alpine air, and their mental observations about each other glitter with as many facets as the Alpine ice.

As Manfred compares Marina’s woeful parenting style to Luna’s and to the mother he can scarcely remember, he grows more and more stolid, yet you keep reading because it’s clear that he is very much aware of Marina and she of him. The plot, such as it is, depends upon two accidents—one when baby Marco falls, and Manfred breaks down the door to find Marina in the bedroom, paralyzed and unable to care for her bleeding baby in the kitchen. Manfred takes charge, first rushing them to the hospital and then becoming more and more involved in their life. What happened in the kitchen that night is never fully revealed but becomes the mystery that hovers over these two people causing them to become more and more entangled in a struggle to know the truth about each other. After Marco heals, Marina goes up the mountain to the lodge run by Manfred’s brother and stays there for a while, welcomed by that family and their children, slowly coming alive again, understanding that her depression is not going to be permanent.

At that point the book opens up, and we learn more about Manfred, his brothers, and their collective past, and we begin to have some real empathy for Manfred, who has always been an outsider. As they begin to relax with each other, we see Marina and Manfred slowly giving in to an obsessive sexual attraction that they cannot consummate for reasons of their own. Yet by now you are hooked. What is going to happen to these two people who could save each other from their dead-end lives?

It is only when the shocking second accident occurs, in which Marina is the rescuer, that you realize how closely woven the destiny of these two people is to the Alpine setting. And you realize how much they have changed and how much you care about them. Here is an example of Comencini’s style, which is so spare yet so clear that she doesn’t even have to give you the clues most writers do to tell you where you are: It is Marina saying goodbye to Manfred when he is recovering in the hospital, at the end of Part I called “Night.”

I lower my hand, but he doesn’t let go. I let my hand slide down into his; he holds it tight, as he did at the stream. We stare at each other, both thinking the same thing: an emptiness in our bellies, a feeling of weakness. We’re both overwhelmed.
“Your husband is coming for you.”
“Tomorrow.”
He has me in the palm of his hand, just as he always has. He’s the only one who ever has.
I lean over him without realizing what I’m doing. I part his lips with mine and he lets me. I feel his tongue, the saliva, the inside of his mouth.
I want this woman; she’s the only one I want. I need to find the strength to tell her.
“Don’t leave me.”
I pull away and kiss him lightly once more. A tender kiss, like the kisses I give Marco. My cheek touches his. He whispers into my ear, “Don’t leave him.”

The last quarter of the book is “The Return” and takes place 15 years later. It is filled with missed opportunities, but, finally, after we learn more about Manfred’s family, after his father dies and old wounds are opened, Marina and Manfred have one night together. Once again the tension builds, but Comencini is not going to give us an easy solution, and, as you might suspect, we are left with yet another question.

It was when I closed the book that I was suddenly struck by the memory of one of my favorite stories, “The Diplomat’s Wife” by Kay Boyle, which takes place in the same Alpine setting but during the years before the Second World War. In that unforgettable story, the people are haunted not only by their overwhelming love but also by the terrible threat of the war that will split open their lives. In When The Night, Comencini has given us the same kind of urgency without the war, with only the obsession that we call, for want of a better term, love. That is no small achievement.