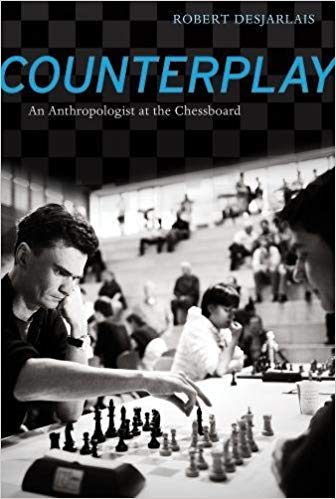 Counterplay is two kinds of books trying to merge into one and failing to do so. It is a sort of chimera in that sense, and if not as grotesque as examples from Greek mythology—e.g. a lioness with a snake’s head—the mismatch can still be jarring.

The book is in part—its best part—a chess travelogue. Desjarlais writes that he returned to the game “seriously in the summer of 2002, after a twenty-year break from competitive chess.” While growing up in western Massachusetts, he “felt at home at the board, less so anywhere else.” When he learned of Bobby Fischer saying, “All I want to do, ever, is play chess,” he shared the sentiment fully, both in his teens and again when he returned to chess.

The story, then, is less about recovery from addiction—the stereotypical focus of many an Oprah-inflected memoir—than about a conscious, intentional courting of it. When Desjarlais’s recovered passion for chess begins, of its own accord, to fade, he suffers. Without chess at its center, he asks, “what meaning would my life have?”

Desjarlais is also a professor of anthropology and, in keeping with that day job, has decided to approach the story of his chess life, and those who shared it with him, as a participant observer—that being, he writes, the “main research method that anthropologists rely on when trying to learn about a particular way of life through ethnographic observation.”

That approach might have worked if Desjarlais hadn’t crammed his tale full with enough learned references to make me wonder, if, in the end, Counterplay wasn’t really a chess story at all but a doctorate or post-doctorate in chess memoir drag. The theme of fading passion would have been enough. It is the theme of many a love story. It would have been enough for this chess story. But Desjarlais can’t let it be enough.

In one paragraph, for example, you find Claude Lévi-Strauss, Floyd Patterson, and Gay Talese in pointless proximity. Maybe this is the norm of certain sort of contemporary anthropological writing. I hope not. It should not be the norm of any kind writing. There’s no telling when Desjarlais, in the course of describing a game played at one of the chess clubs he frequents in Manhattan, suburbia, or cyberspace, will feel obliged, by dint of academic discipline or pedantic habit, to throw in Sartre, Maurice Merleau-Ponty, Konrad Lorenz, Aldous Huxley, Friedrich Nietzsche, Simone Weil, Emmanuel Levinas, Plato, or, for good measure, a reference to an “elaborate ritual” that Sri Lankan Buddhists employ “to reconstitute the consciousness of those who have been devastated by sorcerer”.

Did Desjarlais really think such references helpful or appropriate? Or do they indicate an academic superego that just won’t quit? What the plenitude of reverent references did for me, at any rate, is prepare me, paragraph after paragraph, page after page, to duck.

When Desjarlais writes about chess life and draws on peers or writers who are actually familiar with the game, the writing can be scintillating. When, on the other hand, he’s going for some participant observer bulls eye, you are likely to get thumped with sentences like “A player is positioned before an agonic countersubject in a cross-cutting, multifaceted situation.” Really? But what if the player is just thinking, as chess players are wont to do, about a hanging pawn?

I won’t quote any more of what’s indigestible or simply tired about the book. I’d like to focus on the good side of the Counterplay mix.

I appreciated Desjarlais citing sources that refer to the etymology of the word “addicted.” They note that “addictus” is the “past participle of the Latin verb addicere (to say or pronounce, to decree or bind)—which suggests the user has lost active control of language and thus of consciousness itself, that she or he is already ‘spoken for,’ bound and decreed.’ Instead of saying, one is said.”

Though I know nary a dict or dictum of Latin, I find that pertinent and illuminating.

I very much appreciate the way Desjarlais describes his struggle with the difference between his two languages—chess and English: “The more chess defined my ways of thinking, both at and beyond the chessboard, the more suspicious I became of language. Compared to the precision and accuracy to be found on the chessboard, words . . . had become all too vague, all too unrealizable and inaccurate.”

Chess is enough a microcosm of natural language so that it can deceptively seem its equal or even its better. This is a deception that has intrigued or confused many a thinker, Wittgenstein among them. Desjarlais gets right at the tension.

And he gets at some of the humor of chess life. He quotes Woody Allen saying, “I failed to make the chess team because of my height.” It’s even better when he relies on his own experience.

When he sees two kids playing at a chess club, one of whom is about to lose his queen, he asks
“Aren’t you worried that he can take your queen?” . . .
“No,” he said.
“Why is that?”
“Because if he takes it, then I won’t have worry about it anymore.”

There are wonderful books about chess scenes, the chess world, and its complex, not necessarily endearing, characters. I’m thinking, for example, of Fred Waitzkin’s Searching for Bobby Fischer: The Father of a Prodigy Observes the World of Chess. This is the book from which the immeasurably inferior movie was boiled down.

Desjarlais might have written something worth being included in that genre. Apparently his academic addicere interfered, forcing his participant experience into repeated head-on collisions with his observer persona. The result is not a good read.