You are here: Home / Books / Book Review: Exploring “The Memory of Love” in postwar Sierra Leone

In her second novel, Aminatta Forna gives us a moving story of the toll that the terrible civil war in Sierra Leone has taken and is still taking, years after it supposedly ended. 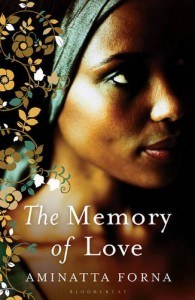 To give a human, fictional face to all aspects of life is every young writer’s dream; to give us a novel that deals with extreme suffering requires talent and ambition of a very high order. Yet Aminatta Forna, a young writer born in Glasgow in 1964, has done just that. A child of a Scottish mother and an African father, Forna spent the first decade of her life in Sierra Leone and has described the horrific story of her father, a dissident in Sierra Leone, being taken away when she was just 10 and killed a year later in her memoir, The Devil That Danced on the Water.

Now, in her second novel, The Memory of Love, she has given us a moving story of the toll that terrible civil war has taken and is still taking, years after it supposedly ended.

What I admire most about this novel is the time it takes, the way it creeps up on you. When I first started reading, I wondered if all that detail, some of it admittedly confusing, was necessary, but the more I read, the more essential those details became. And as the story builds, as she weaves several strands of narrative into a coherent and shattering tale, Forna has the patience and confidence of a mature writer who is absolutely sure that the story she is telling is, in Rilke’s famous dictum, written “out of necessity.”

Basically, it is a story of three men: Adrian, an English psychologist who has left a faltering marriage to come to Africa to work with people who have Post Traumatic Stress Disorder; Kai, a young, African orthopedic surgeon whose work is his only escape from the memories that plague him; and an older man, Elias Cole, who is Adrian’s only private patient and whose story of his part in the civil war provides the key to a past that is filled with secrets and lies. I find it interesting that Forna is so comfortable in the minds of these three men while the women they love are more elusive, almost ethereal at times, which gives the book an added layer of mystery, almost of intrigue.

Much of this novel is set in the hospital in the capital where Adrian and Kai work and meet and where Elias is dying, and part of its appeal is the matter-of-fact way conditions there are described. As you read, you feel yourself immersed in the daily lives of these characters who are doing work they are not even sure will really help, because how can you help a population that lives in a constant state of PSTD? Where that is all they know? Where shattered bodies and minds are simply the norm? Yet where life is filled with humor and stubbornness and a quirky ability to survive, as well. Forna’s acceptance of this wounded and unnamed country gives it an intimacy that all really good fiction has—she is not expressing outrage or lecturing us but simply telling a story that speaks for itself and is so affecting and terrible because of her ability to present it in all its bewildering facets.

One of my favorite characters is Ileana, a psychologist who was trained in Bucharest and lived in Israel. Here she is, explaining to Adrian how so many people are incarcerated in the mental wards:

. . .They looted everywhere and set fire to people’s houses, burned hundreds alive. The poorest people, of course. Always. Forced them to march into the city, to act as a human shield for the fighters. There were atrocities on all sides. So when things turned even worse, especially during the occupation, people hid inside these walls, pretending to be crazy. Poetic, don’t you think? This is, after all, an asylum. There were a couple of peacekeepers here as well.

And then a page or so later,

“Now you get it. You should have been here at the start. But of course you weren’t. Nobody was. You all turn up when it’s over.”

There are several coincidences in this novel, and other reviewers seem to have taken umbrage at that. But I was ready to suspend my disbelief as these three characters became more and more entangled with each other. What interested me was not so much the coincidences, but the way very human, sexual love propels people to acts they cannot even imagine, and although Elias is revealed to be far less than admirable, his longing and frustrations are very real. And so are the questions and ironies we are faced with as the story reaches its climax. For although love does redeem and give us a form of escape, can it really be so powerful in a place where people have witnessed the unspeakable and still live with the unspeakable?

In telling this story with all her enormous gifts, Forna presents us with the age old problem of human brutality. As a character in a work of affecting fiction, Adrian seeks refuge in the memory of love and we hope this is a kind of triumph for him. He says,

For death takes everything, leaves behind no possibilities, save one—which is to remember. Adrian cannot believe with what intensity one can continue to love a person who is dead. Only fools, he believes, think that love is for the living alone.

Perhaps brave novels by the young are the only way to give a voice to those who have witnessed an evil as enormous as the one Forna has described, a war in its way as debilitating to the human spirit as the Holocaust was. For when I closed this fine novel, I was reminded of what the great Primo Levi said in The Drowned and the Saved:

“We, the survivors, are not the true witnesses . . . we are . . . an anomalous minority; we are those who by their prevarications, or their attributes, or their good luck did not touch bottom. Those who did so, those who saw the Gorgon, have not returned to tell us about it, or they returned mute.”

Roberta Silman is the author of Blood Relations, a story collection; three novels, Boundaries, The Dream Dredger, and Beginning the World Again, and a children’s book, Somebody Else’s Child. She has recently completed a new novel, Secrets and Shadows. She can be reached at rsilman@verizon.net