You are here: Home / Books / Book Review: “Let’s Do It: The Birth of Pop Music: A History” — An Enlightening Learning Experience

A lot of history is jammed into this book, but the author manages to ruminate in an informative and engrossing way on 50-plus years of pop music.

“The roll call of [Glenn] Miller’s hits — ‘In the Mood,’ ‘Moonlight Serenade,’ ‘Little Brown Jug,’ ‘Chattanooga Choo Choo,’ ‘A String of Pearls,’ ‘Tuxedo Junction,’ ‘American Patrol’ — is as familiar as the Beatles’ singles.” Bob Stanley in Let’s Do It: The Birth of Pop Music: A History. 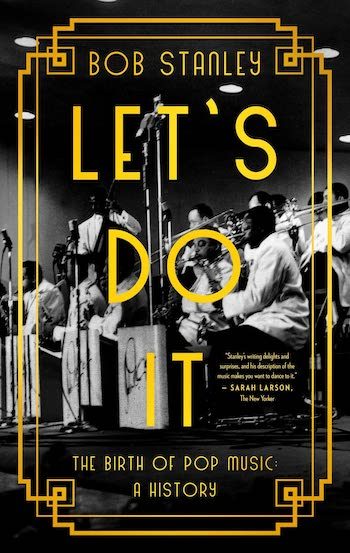 I scoffed the first time I read the above sentence.  I meant no disrespect to bandleader Glenn Miller, an unquestionable legend. But I didn’t recognize any of the song titles. And here was Bob Stanley telling me these songs were as well known as “She Loves You,” “I Want to Hold Your Hand,” “Can’t Buy Me Love,” “A Hard Day’s Night,” “Yesterday,” “All You Need is Love” and “Hey Jude.”

Slightly irritated, I turned to the Internet and fired up “In the Mood.”

“Oh,” I realized after approximately one and a half seconds.  “THAT tune.”

Dumb luck I figured and then moved on to “Moonlight Serenade.”

I stopped there because Stanley’s point had been made.  Of course I knew these songs. I just didn’t know I knew them.

There’s far more in Let’s Do It I didn’t know than I did (whether I initially knew I knew it or not). This should not be surprising, considering the book’s expansive scope. If the tune is popular (or at least was popular), is either American or British, and dates to the first half of the 20th century, there’s a good chance Stanley takes notice. That’s a lot of history to jam into a book — even one that is 600 pages — but the author manages to ruminate on 50-plus years of pop music. And that is quite an achievement, given that he presents reams of information in an engrossing way.

It helps that everything in Let’s Do It is a quick hit, which is appropriate for an examination of pop. Even the chapter devoted to a giant, Irving Berlin, is a mere nine pages long. And he wrote “White Christmas”!  The section on Bing Crosby is barely longer (11 pages) and he sang “White Christmas”! My new friend Glenn Miller gets only eight pages, while Frank Sinatra is the rundown’s champion — two chapters are dedicated to the iconic crooner (22 pages between them). Though it should be noted that Sinatra has to share the second one with Sammy and Dino.

Berlin, Crosby, Miller, and Sinatra are among the undisputed big names in Let’s Do It (as are Louis Armstrong, Duke Ellington, Judy Garland, and Billie Holiday), but Stanley also finds room for the unfairly forgotten, or the simply lesser known. He loves the celebrated and the neglected, and his enthusiasm is contagious. For example, here he is on the undemanding but “thoroughly uplifting” songs of Guy Mitchell. “OK,” Stanley writes of “Cuff of My Shirt,” “Chick a Boom,” and “Sippin’ Soda,” “so they weren’t [Sinatra’s celebrated] ‘In the Wee Small Hours,’ but then sometimes you might want to go on a picnic instead of a pub crawl.”

It shouldn’t be overlooked that Stanley is British, which gives Let’s Do It a unique perspective on the relative roles played by the US and UK in the development of pop music. On the one hand, he shines a light on Britain’s dance bands, music hall, and post-WWII trad jazz revival, all of which an American author might leave out. On the other hand, if a Yankee wrote, “Frank Sinatra was one of the main reasons why so many people in 1940s and ’50s Britain wished they were Americans,” those would be considered fighting words. When Stanley makes that assertion, its reads like the truth. Further proof that it really was America that invented the 20th century.

Not that America fully embraced the mad scientists toiling away in its marginalized labs. Blacks and immigrants are the major heroes of Let’s Do It.  Take Scott Joplin, the Black master of ragtime, who insisted that his music be taken seriously. So much so that he even composed a ragtime opera.  We don’t really remember the opera, but his pop masterpieces “Maple Leaf Rag” and “The Entertainer” have endured for more than a century.

Irving Berlin was born Israel Beilin in Russia and moved with his family to New York when he was five. By 22, he’d written “Alexander’s Ragtime Band” (a track Joplin hated), which Stanley dubs “the most significant song in the development of American pop,” in part because it was the first hit record that prioritized the chorus. Berlin himself said the song worked because of its simplicity and the fact that “the artiste can sing it, a baby can sing it, anybody and everybody can sing it. Its appeal is to the masses, not the classes.”

That’s about as good a definition of pop music as you’ll find, though at first I was confused by the exorbitant praise heaped on a tune I was sure I had never heard.

To the Internet I went, and my initial suspicions were confirmed  I was watching/listening to a performance of the song from the movie Alexander’s Ragtime Band, a version that starts out as an instrumental. Not only did I not recognize the song, it didn’t even seem like a tune that was worth becoming familiar with. Then the vocals, and that chorus, hit:

It’s the best band in the land

Having been reintroduced to “Alexander’s Ragtime Band,” I will say that I prefer “The Entertainer.” I’m not sure the masses of the 1910s, or Stanley, for that matter, would agree with me. But that’s okay. A good argument about the appeal of pop is always fun. No matter how old the songs are.