You are here: Home / Featured / Album Review: The Tedeschi Trucks Band’s “I Am the Moon” — Part Two, “Ascension”

The high quality of the material presented thus far justifies Tedeschi Trucks Band’s decision to release these songs in small batches over the course of three months. 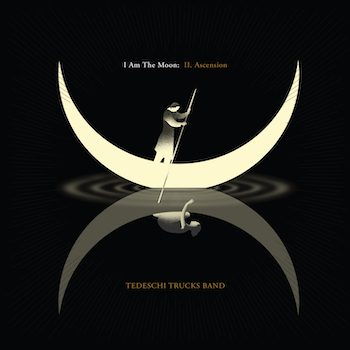 The second installment of Tedeschi Trucks Band’s “I Am the Moon” project hits this week, holding up the same level of quality and exploratory playing delivered in the saga’s first chapter earlier in June.

The album Ascension can be heard in full tomorrow night on the band’s YouTube channel during the premiere of the film made to accompany the album’s release. Ascension will then hit the streaming sites and be physically available on Friday, the day before Tedeschi Trucks Band brings its Wheels of Soul tour to the Bank of New Hampshire Pavilion in Gilford. TTB keyboardist Gabe Dixon will open that bill with his solo band, followed by Los Lobos and a headlining set by TTB.

“I Am the Moon” is a conceptual piece, drawing from the stories and themes presented in the epic 12th-century Persian poem “The Story of Layla and Majnun” by Nizami. The 12-piece Tedeschi Trucks band wrote and recorded the songs during the period of pandemic lockdown, when touring and traveling were out of the question.

The story’s tangle of heavy emotions, spawned by forbidden love, isolation, separation, family, nature, desire, and rapture — to name just a few of the poem’s subjects — has inspired an impressive array of new material to add to TTB’s already rich repertoire.

The jump from the inaugural release of Crescent (Arts Fuse review) to Ascension establishes that TTB did not set out to write a narrative-style rock opera driven by an interpretation of Nizami’s work. Instead, in this album we find a more subtle shift in mood. Whereas Crescent felt full of awe and intimacy, Ascension probes the tensions of separation.

“Playing With My Emotions” opens the seven-song album with a shot of propulsive groove-rock shaded with funk beats and Latin accents. Susan Tedeschi sings from both the female and male perspectives of frustrated partners, introducing into the song cycle, with a twist, the theme of pain as an inevitable part of love. The sparring isn’t confined to words either, as Tedeschi and her husband Derek Trucks engage in a spirited back and forth of guitar soloing.

Ascension is a showcase for Tedeschi in particular. She handles the vocal leads throughout (sharing a bit with Dixon), which makes her the album’s central narrator. In that role, she handily navigates the album’s varied stylistic terrain, which spans from the campfire gospel of “So Long Savior” (on which she also plays drums!) to the boozy sway of “La Di Da.”

Melancholy ebbs and flows throughout this record, which sets up some foreboding for the next two chapters to follow. The aching “Hold That Line” and rollicking “Ain’t That Something” have wisps of love’s joys, but separations, departures, and a sense that time is running out are increasingly prominent.

“All the Love” is the album’s centerpiece, offering an opportunity for the band to unload all it has to offer. Tedeschi’s vocal delivery nurtures the song’s prayerful lyrics while the horns and other vocalists set up a dramatic scaffold around her voice. Then the tune takes a turn into a lengthy instrumental passage that undoes that scaffolding, with Trucks leading the horns and rhythm section through some chaotic playing that eventually melts down to near silence — before the musicians regroup in a passage that suggests vulnerability and uncertainty.

The high quality of the material presented thus far justifies TTB’s decision to release these songs in small batches over the course of three months. As it slowly pulls back the curtain on the full reveal of “I Am the Moon,” TTB is dispensing an astonishing amount of detail and design to consider and appreciate. The band is cultivating anticipation in a way that feels more genuine than gimmicky.