Given the pain they endured, it is admirable just how strong many of the Menudo members are. 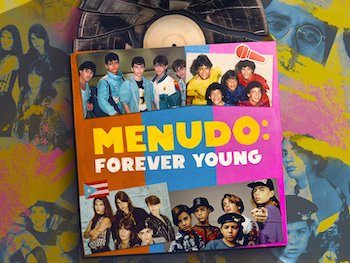 My husband once came up with a truly disturbing scenario: what if, once the Teenage Mutant Ninja Turtles turned 20, Splinter killed them off and created a new batch of teenage turtles from radioactive ooze? That never occurred, but it’s not too far off from the boy band formula Menudo’s manager Edgardo Diaz came up with. Diaz realized that a band’s appeal to hordes of teenage girls would never wane if its members were always young. Therefore, every few years he would replace the older members of Menudo with fresh new bushy-tailed recruits. He didn’t kill the older members; instead, he subjected them to horrific abuse.

Directors Angel Manuel Soto and Kristofer Ríos had their work cut out for them dealing with Menudo as the subject of HBO Max’s latest docuseries. They had to carefully balance detailing the trauma of its former band members while still respecting the band’s legacy. It’s a tightrope act the pair manage to pull off gracefully. All of the brightly colored spandex and ’80s synth pop Menudo was celebrated for is here, along with examinations of exactly how badly band members were abused. They are good on music history as well: by way of interviews with well-versed journalists, we learn how Menudo was the precursor to later boy bands and introduced Latin pop to the rest of the world (primarily the US). It’s a fascinating mix of information and exposé. Still, throughout most of my nonstop watch (this was one of the few docuseries I’ve ever binged), I was angry. Why didn’t anyone stop Diaz? How was he able to get away with such blatant exploitation? What’s even more disturbing is that he’s not currently in prison, and this kind of abuse of adolescent performers continues to run rampant.

Over the band’s long history, more than 30 boys were members. The most famous is Ricky Martin, who either was not interviewed or chose not to participate. According to other members of Menudo, Martin was pretty much a diva. Many other members tell their stories, and they are harrowing. The boys were subjected to malnutrition, nonstop work, and physical and emotional abuse. Some were raped on multiple occasions. They couldn’t demand that their parents step in and stop the terror because Diaz had made their guardians sign over their rights. He garnered this kind of control because he picked boys from impoverished backgrounds whose parents were more likely to sign because they saw the band as an opportunity for their boys to escape poverty. Diaz was a monster and he underlines the allegations by not even attempting to defend himself: he refused the documentarians’ request for an interview. It is cathartic watching the former members seize on a chance to tell their story and unleash their fury at their mistreatment. I shared their rage; I had to stop watching from time to time in order to fume. However, unlike me, the heartthrobs of Menudo were never given that luxury. They could not hit pause on the nightmare.

The series follows a narrative arc that has become de facto for most documentaries/biopics about musicians: the beginning highlights how the band came to be in the first place and chronicles its rise to fame — then comes the revelations of the dark side. This format has become de rigueur because it is efficient and it works. So yes, the structure of Menudo: Forever Young sometimes has the feel of a mechanical episode of Behind the Music. But there is a difference: Menudo band members are united in talking about their shared trauma. This isn’t two brothers recalling a long-standing feud; this is a collective tragedy borne of years of repetitive abuse.

Given the pain they endured, it is admirable just how strong many of the Menudo members are. One of the standouts is Roy Rosello, who in 1991 directly confronted Diaz on a talk show. Disappointingly, the host and most of the mainstream media sided with Diaz, even though four members of the band quit at the same time and filed a lawsuit against Diaz. This was the era  before #Metoo, but even now the media is far too eager to victim shame. The boys’ charges were belittled because they had come forward “after they were rich and famous,” an absurd defense of the status quo that is still used today.

Menudo: Siempre Joven isn’t completely depressing. Strong points are made about the band doing something useful with its legacy. Despite the sheer hell they went through, the Menudos are moving forward with their lives — they have even launched their own reunion tour arranged on their own terms. Yet despite these encouraging signs, the overall impression is that the abuse the Menudos endured is still going on today, that Diaz’s scheme remains a model for rapacious entertainment conglomerates. How many young Disney stars have stepped forward with their own sad tales? How many more will have to speak up before the powers-that-be-change an unjust system once and for all?