You are here: Home / Books / Book Review: “You Have a Friend in 10A” — A Laboratory of a Short Story Collection

You come away from this volume of short stories thinking that sure, Maggie Shipstead does write what she knows — it’s just that she may know everything. 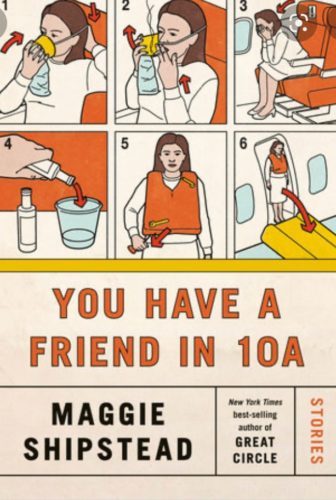 Is “Write what you know” still considered sage advice? The admonition is credited to Hemingway, who didn’t necessarily follow it. If we apply it to Maggie Shipstead and her first collection of stories, You Have A Friend in 10A, it might seem unlikely to — her tales are set all over the place, and in numerous historical eras. Only it may still be applicable here: you come away from this volume thinking that sure, Maggie Shipstead does write what she knows — it’s just that she may know everything.

This book comes on the heels of Shipstead’s recent epic novel, a magnum opus and Booker Prize shortlist pick, The Great Circle. That 600+ page achievement, set around the world and chronicling the lives of an early 20th-century aviator and the 21st-century film star who chooses to recreate her adventures, has been widely praised. You Have A Friend in 10A collects works written in the decade or so prior to The Great Circle, largely appearing in major literary magazines such as Tin House and VQR, and once it is understood that they were written earlier, you might see them as dress rehearsals for the novel. In the acknowledgement at the collection’s end, the author herself describes them as having been drafted “under wildly varied circumstances,” with some composed in writer’s workshops, and others in solitude, receiving “little feedback.”

Your F.C.* wonders if it may have been more useful to explain the origins here in advance, rather than in a possibly overlooked afterword, for it might explain the variations in quality. That is not to say that this book is unworthy: Shipstead does a lot in these pages, often very well, and is always most readable. It’s a laboratory of a book, trying so many narrative forms, diverse settings, various timelines, and often all of these features within a single piece. We are taken to the 19th century and a remote South Pacific atoll, whose French and English inhabitants bicker and nearly waste away in their chaos; we rummage among the bones of the catacombs underneath Paris with a couple who have known each other since childhood, and may or may not be siblings; and we look in on a remote Irish artists colony, where a painter encounters a woman who he slept with once long ago; she doesn’t recognize him, but she does predict when the end of the world will come… correctly?! (It closes the story, “Lambs,” in a white flash of light! In 2035, for those following along at home…we have thirteen more years!)

Here are a few other engaging premises. A Montana horseman and his nephew find themselves competing for the attention of a young, independently minded female ranch hand in “The Cowboy Tango.” “Acknowledgements” is voiced by an anxious writer on the eve of the publication of his first novel, looking back on his days at a graduate workshop and the relationships there that inspired him. You follow a successful, if predatory, Hollywood producer, as he drags his two irritable teenaged daughters from a failed marriage to a farming town where his father has passed away, in order to take care of remaining effects in “Angel Lust.” “In The Olympic Village” portrays two athletes, competing in Olympic games, as they engage in a short-lived affair. The book’s dust jacket art will explain that the “10A” of the title story refers to an airline seat assignment and not a residence; in it, a young actress is rebounding from drug abuse, from her marriage with a powerful movie star (his fourth, natch), and the religious cult he forced upon her and their daughter, as she flies to visit her estranged mother. That entry, and the concluding one, “Backcountry,” may be the two strongest works here. In the latter piece, we’re in the world of western U.S. ski and fly fishing towns, with an itinerant ski instructor who is in a relationship with a failed resort developer. He disappears after a major project he’s proposing is turned down; she narrowly avoids an avalanche while searching for him on a mountainside.

As noted above, some stories here fare more successfully than others — here and there you get drama that feels artificially inserted, or sequencing that seems jumpy. It’s also interesting to see how some of the better work was written less recently; the title tale and the well-felt “Cowboy Tango” date back to a dozen years ago. Oh maybe that’s picayune? There’s no question about whether we’re in the hands of an accomplished storyteller here. Overall, 10A is most engaging, and while not knowing about you, your F.C. would think of it as his own kind of swell summer read.