Someone/Anyone? is packed with lots of great music and makes a strong complement to the album it compliments, Something/Anything? 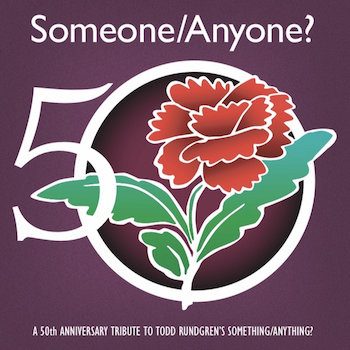 Todd Rundgren first came to semi-prominence as a member of the power pop band Nazz, but when he went solo in 1970, he was ready to trade in his Who obsession for a more intense flirtation with the harmonically sophisticated stylings of Laura Nyro. His first two solo albums, Runt and Runt: The Ballad of Todd Rundgren, were moderately successful portraits of the artist as a young man of talent and ambition who was still looking for the right formula. For his next album, Rundgren cranked up the talent and ambition to 11, and came away with a Top 5 single. Something/Anything?, released 50 years ago, is a sprawling two-record set (three sides of which featured Rundgren playing all the instruments) that covers a ton of musical ground, from breezy pop to quirky prog, from emotional balladry to hard rock. It was a lot of music to take in, but listeners definitely took to it, turning its remake of Nazz’s “Hello It’s Me” into a hit.

To celebrate the album’s half-century of excellence, guitarist/producer Fernando Perdomo (featured in the band supporting the live performances in the Echo in the Canyon documentary) assembled a crack lineup of musicians — big talents though not all household names — to recreate the album, track by track, in running order. (Last year, Perdomo did the same thing for the 50th anniversary of Paul and Linda McCartney’s Ram, earning Macca’s seal of approval.) The album, titled Someone/Anyone?, was just released via Bandcamp. All profits are earmarked to support Rundgren’s charity, Spirit of Harmony, which advocates for music education in schools.

The contributing artists comprise an interesting mix of Rundgren connections and just-right choices. For example, Something/Anything? opens with a song called “I Saw the Light” that Rundgren wrote in tribute to Carole King. On Someone/Anyone?, the song is sung — beautifully, by the way — by King’s daughter Louise Goffin. Ken Sharp, an author and music writer who has recorded a number of highly faithful pop covers, does the same here for the next track, “It Wouldn’t Have Made Any Difference.” Brian Wilson Band multi-instrumentalist Probyn Gregory pays tribute to Todd in more ways than one: he handles all the musical and vocal chores for “Cold Morning Light” (his Wilson bandmate Darian Sahanaja played keyboards on the Goffin track, and it’s worth noting that Rundgren recorded a remarkably faithful cover of Wilson’s “Good Vibrations” in 1976).

The proggiest tune on both albums is the instrumental “Breathless,” here successfully recreated by Perdomo (who also guests on numerous other tracks) and Dream Theater keyboardist Jordan Rudess; this tune, featuring speedy runs on piano and synthesizer, is right in the latter’s wheelhouse. This is followed by the theatrical “The Night the Carousel Burned Down,” featuring longtime Rundgren right-hand man and Utopia bandmate Kasim Sulton. Always a better singer than his boss, Kaz’s voice fits the song like a glove, while Perdomo offers some tasty guitar work. This is definitely one of the highlights of the album.

Victor Wainwright and The Wildroots is a blues and boogie woogie band from the south but they mesh with the project perfectly, offering a sweet and suitably bouncy version of “Saving Grace.” English singer/songwriter/producer Phil Thornalley — appearing as Astral Drive — has worked with the Cure, Prefab Sprout, and the Psychedelic Furs; here he does a great take on the dreamy love song “Marlene.” Previously, Astral Drive has covered Todd’s “A Dream Goes On Forever” and Nazz’s “Open My Eyes.”

The song “Black Maria” helped establish Rundgren as something of a guitar hero. Tackling that piece on the tribute is Rob Bonfiglio, an in-demand musician who is married to Brian Wilson’s daughter Carnie, she of Wilson Phillips. Stan Lynch, ex-Tom Petty and the Heartbreakers, provides the solid drums, and the bass is by Stephen Dees, who has played with Rundgren and Hall and Oates. (The connections just keep coming.) Marshall Crenshaw, who knows his way around a power pop tune, actually turns in a rather understated performance of “Couldn’t I Just Tell You,” a sharp contrast to the original’s pulsing tempo and guitar-heavy performance.

Side 4 of Something/Anything? is the one side on which Rundgren doesn’t play everything himself. The songs form something of an autobiographical mini rock opera. On the tribute album, it kicks off with a high-spirited medley of “Money” and “Messin’ With the Kid” by the Miami Beach High School Rock Ensemble and the Albert Castiglia Band. This is followed by a note-perfect cover of “Dust in the Wind” by the band Secret Society. The hit “Hello It’s Me” is gifted to Brent Bourgeois, formerly of the Rundgren-produced Bourgeois Tagg. It doesn’t disappoint, especially the horns (trombone, tenor sax, sand flugelhorn). Another former member of Bourgeois Tagg, guitarist Lyle Workman, who has played on a pair of Rundgren albums, and funky keyboardist/vocalist Dave Schulz do a great job on “Some Folks Are Even Whiter Than Me.” The next track, “You Left Me Sore,” is by the Intoxicats, featuring lead vocalist Michelle Rundgren, Todd’s wife.

The side and album proper end with the song “S.L.U.T.” This is performed by local heroes John Powhida International Airport, who, unlike most of the artists on this tribute, don’t feel constrained to copy or be heavily influenced by the original track — which is somewhat surprising because Powhida looks like, sounds like, was heavily influenced by, and has performed with Rundgren. With great vocals by Powhida and Amber Angelina, and strong instrumental backing by Powhida, Peter Moore, and slide guitarist Mike Castellana, the production is exciting, surprising, and packed with energy.

There are seven bonus tracks; most are versions of songs that different artists already did on the album. They are uniformly good but none make you think they should have replaced the versions in the album proper. Taken altogether, though, Someone/Anyone? is packed with lots of great music and makes a strong complement to the album it compliments, Something/Anything? I certainly wouldn’t take it over the original, but I would recommend owning both.