You are here: Home / Books / Book Review: Ohio Bound — “Far From Their Eyes”

This anthology, for all its occasional sadness, is optimistic about the future of immigration to America. 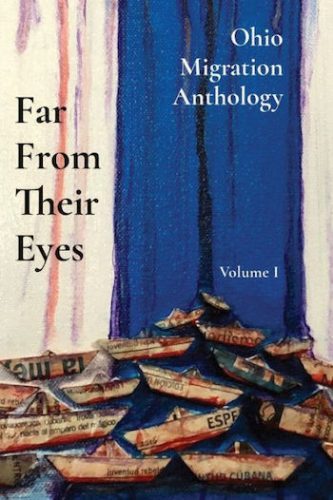 Anthologies can be ordered in various ways: by author, by subject, by form. But there is always room for a new twist: in this case, a gathering of stories chosen according to the eventual destination of its subjects. Put together by Lynn Tramonte, director of the Ohio Immigrant Alliance, and Awa Harouna, whose father’s near-deportation was examined in the film Living Undocumented, Far From Their Eyes: Ohio Migration Anthology (Vol. I) assembles the stories of migrants, immigrants, and refugees, as well as their descendants, who’ve ended up in one way or another in Ohio.

In another world, these stories may not have found a place among one another. One of the contributors, Houleye Thiam, the president and founder of Youth and Hope Inc, points out another truth: migration is not always a choice for some. Far From Their Eyes is an ambitious collection that digs deep into the complex drama of migration across time and space. Skye Nguyen’s “The Life and Story of My Grandpa” was written when the author was in fifth grade. Michele Rudolph’s “Cleveland, The New Promised Land,” tells a story inspired by her father, her way of paying tribute to him “and the six million other African Americans who were a part of the Great Migration.” Thiam’s poems assert the ubiquity of accents and proclaim how “This accent is a poet and a storyteller. This accent is the seed of endless possibilities./ Yes this accent is me, all of me, and I am a work in progress.”

Eldis Rodriguez-Baez’s paintings, interspersed throughout the anthology, offer a poignant respite from the verbal. With each illustration, a reader can catch their breath while it simultaneously catches in their throat. A fish gazes impassively at a hook and who knows how long the paper boat will float — but then there’s the mushroom, the implication of an unseen network. A mycelium connectivity as one person branches off into another.

Not all the stories in Far From Their Eyes come from those who were able to find the freedom they sought. Some of the writers, such Saidu Sow, were deported back to the countries from which they fled as adults. Others, like Mory Keita, are being taken back to countries they left as children. Of course, the narratives here merely scratch the surface, given the challenges the United States government presents to those looking for freedom. As Harouna told the Columbus Dispatch, “there are different factors and different stories, and each story that carries its own voice has a level of trauma and a level of hope to it.”

What comes out of reading about these experiences? What comes out of knowing about the different things people endure on their way from being in one place to another? To read about the movement of others isn’t about preparing for the inevitable — it’s about finding the intersections that inevitably remake us all. An anthology is tasked with bringing things together, and the remarkable thing about this volume is that the stories were already together. The authors and their stories came to Ohio before they were compiled in the anthology, though they are neither the first nor the last.

In Living Undocumented, Harouna points out that “you can watch a documentary (and) you can say, ‘Well, this is too bad.’ But at the end of the day, it’s just something that you’re watching on TV. And you can turn that off and go about your life.” The same thing will happen when the reader ends Far From Their Eyes. Once the final page is turned, the reader is out of the stories. But that doesn’t have to mean that the story is over, for the writer or the reader.

It’s estimated that ICE is holding people in over 200 immigrant prisons and jails in the United States and over the course of nine days in September 2021, the Biden administration expelled nearly 4,000 Haitian people who came to the US seeking asylum. Reading through the pieces in the anthology won’t change the reality of US immigration, but what benefit is there in acting as if there aren’t countless stories to be known? Having these creations available is a benefit — they are American narratives that we ignore at our moral and political peril. “We only see what we choose to see, but we can choose differently,” states Harouna. These stories invite readers to expand their perception.

Personally, as a reader I can’t quite distinguish how much of my enjoyment of the anthology comes out of the fact that, as an immigrant, my own story falls into a different-but-same resemblance. When I finished reading Far From Their Eyes I was grateful that a text like this was put together, and that these authors and their voices were given a chance to be heard. It’s a privilege to get to know these stories.

Note: “Proceeds from the book sales will be divided among contributors, with a portion donated to the Ohio Center for Strategic Immigration Litigation & Outreach (OCSILiO) and the Cleveland Association of Black Storytellers (CABS).”