I’m not entirely sure if Enigma just adds up to the sum of its parts or if it, in fact, exceeds them. Either way, it is music of stirring, striking originality. 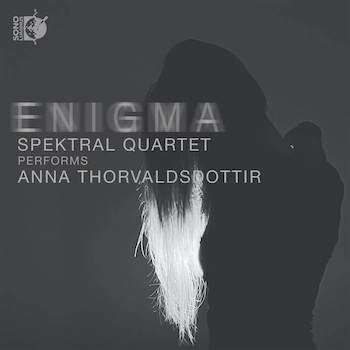 On the one hand, it’s unlike just about any other string quartet you’ve probably heard. Thorvaldsdottir’s writing in it conjures up the immensity of nature with its inventive use of extended techniques: the start of the first of the Quartet’s three movements, for instance, seems to evoke an Icelandic glacier or rock face.

At the same time, she’s not averse to drawing on familiar, even archaic, devices. Later on in that opening movement are some beguiling, chorale-like passages. Engima’s third movement features slowly unfolding melodic lines akin to a chain of suspensions — all heard above a drone that, perhaps, functions as a pedal point.

And, lest the impression that all is bleak and forbidding dissuade anyone from the piece, Thorvaldsdottir somehow manages to get those same materials to dance together in the central movement. Granted, this is an ominously playful dance — and it’s cut off, before too long, by a return of the chorale — but her technique in Enigma is top-notch.

What to make of it all? That’s a great question. Even after multiple listenings, I’m not entirely sure if Enigma just adds up to the sum of its parts or if it, in fact, exceeds them.

Either way, it is music of stirring, striking originality.

The essence of Thorvaldsdottir’s language in this string quartet is much the same as in her orchestral writing: bracing, incalculable, and elemental — yet appealing to the ear. The contrasts between otherworldly “sound episodes” and the recurring chorale gestures, for one, are affecting. And there are moments of unabashed, sensuous beauty, like the radiant, cathartic episode just before the finale’s sorrowful coda.

There’s also an almost Messiaen-like quality to Thorvaldsdottir’s writing: her repetition of gestures and devices is anything but predictable, yet her procedures unfold in cogent and clearly dramatic ways. What’s more, the music is imbued with a spiritual aspect that becomes apparent as you proceed through Enigma’s 30-minute duration. To be sure, it’s more of a naturalistic type than dogmatic — but it’s present, all the same.

At its best, too, Enigma blurs the lines between consonance, dissonance, and extended techniques. These are terms and concepts that usually have clear definitions. Here, though, they ultimately lose their conventional meanings and simply become means to expressive ends, some sumptuous, some austere.

That the piece comes off so well is a testament to the exceptional playing of the Spektral Quartet. A group that revels in challenging new music, the Spektrals embrace Enigma’s extremes: its moments of filigree — scratch tones, bowing behind the bridge, seagull effects, and so on — sound as gripping as the dense chords that ultimately provide Thorvaldsdottir’s music its grounding. Yet the ensemble doesn’t short-change the score’s lyrical moments, especially in the reflective third movement.

Taken together, then, a haunting release.