You are here: Home / Books / Book Review: “The Fascination of What’s Difficult: A Life of Maud Gonne” — Ireland’s Unlikable Joan of Arc

“What happens when you discover your heroine was a vile anti-Semite?”

The Fascination of What’s Difficult: A Life of Maud Gonne by Kim Bendheim. Or Books, 200 pages, $22 (paperback). 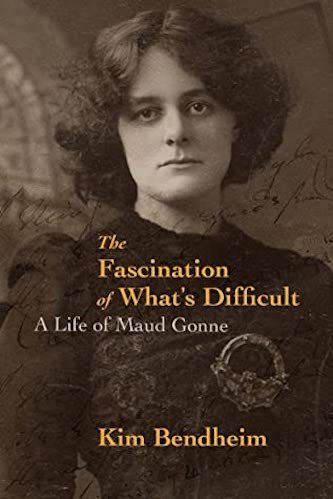 There is a tendency in popular Irish historicism to favor the myth. Difficult parts of the past are often swept under the rug so the “official” story can be marketed. The air-brushing is a by-product of the nationalist meat-grinder. The chronicle of how an oppressed colony becomes an independent nation-state is a sympathetic saga, its venerable underdogs practically canonized. The authorized version inevitably obscures the preceding chaos, tangled fallout, and intricacies of Ireland’s political transformation. Complex figures are flattened, stripped of their vital humanity.

In her first book, The Fascination of What’s Difficult: A Life of Maud Gonne, Kim Bendheim does not shy away from complication. In fact, she embraces it in a succinct but richly detailed critical biography of one of Ireland’s most celebrated and enigmatic political and cultural figures. The result is a compelling study of a woman who for too long has been perceived as otherworldly, despite the fact that she had dedicated her life to Ireland’s revolutionary struggle. Penetrating beyond preconceptions about Maud proved to be demanding. “Maud had a talent,” Bendheim writes, “for rearranging events for public display, as if she were the heroine of her own splendid adventure story. She was a great mythmaker.” Maud’s appetite for fantasy, often in service of a political objective, took its psychological toll on the woman who, in a 1902 one-act drama by William Butler Yeats and Lady Gregory, played Cathleen Ni Houlihan, an archetypal image of Mother Ireland that captivated the imagination of a nation yearning for freedom.

Bendheim’s fascination with Maud Gonne (1866-1953) dates back to 1993 when she reviewed a collection of Gonne-Yeats letters. She “became seduced not, as one might expect, by the great poet’s few surviving letters to her, but by Maud’s voice on the page.” Later, as a graduate student, a professor encouraged Bendheim to write about the woman who is often idolized as either W.B. Yeats’s muse or “the Irish Joan of Arc.” Neither accolade is wholly adequate because they stop short of recognizing her radicalism. “She was a formidable political agitator,” Bendheim explains, “a feminist before the term was coined.” The Fascination of What’s Difficult deepens our understanding of Gonne by examining the social, political, and personal circumstances of her life as she traverses the various tendencies and personalities of Irish rebellion.

Bendheim has done her background reading, but this is not an academic exercise. Her approach is personal and meditative. She interrogates the intense relationships Gonne fostered throughout her long life as an indefatigable freedom fighter. When she was  a young woman Maud inherited an enormous fortune, and that made it possible for her to escape many of the traditional expectations of her gender and station as a well-spoken (though not classically educated) daughter of an English military officer. Her wealth, along with the early loss of her mother, an absent father whom she adored, and a peripatetic upbringing contributed to what would be a protean life. Born in England, Maud was raised in Ireland, England, and France. She followed her father as he was assigned to various administrative postings; sometimes she lived with relatives while he was serving in the far reaches of the empire. The only real constant in her youth was her nurse, Bowie. “We don’t know much about Bowie,” Bendheim writes, except that she was ‘a sociable soul,’ and a healer.” This we learn from Gonne’s autobiography, a source that Bendheim refers to often, not as an authoritative text, but to illustrate how much of Gonne’s life was a deliberate fabrication. She cast those around her into various parts in her self-glorifying drama.

So what exactly did this rebel do? Gonne was involved in nearly every active strand of late 19th and early 20th-century Irish nationalism and republicanism. She was attached to cultural nationalism through people like Yeats and Lady Gregory. “No one who saw the production [of Cathleen ni Houlihan] could forget Maud playing an old Woman, who transforms into a beauty who ‘had the walk of a queen,’ embodying Ireland for the audience as well as for Yeats.” In the west of Ireland, while Yeats and Lady Gregory collected folklore, the practical activist Gonne set up soup kitchens to feed the poor. She fed the families impacted by the 1913 Dublin Lockout and started school lunch programs. She befriended the radical socialist James Connolly and helped organize protests during the Queen’s jubilee. She gave money, spoke at meetings, and wrote countless polemics on behalf of the cause of Irish nationalism. She even staggered through an addiction to chloroform (which was then administered as a medication), one of whose symptoms was to make her forget she knew how to speak French. She was a tireless champion of human rights, and a particularly ardent advocate for the rights of political prisoners. (Her son, Sean MacBride, would go on to lead Amnesty International in the ’70s.)

Her rebelliousness was as broad as it was active. Her efforts ran the length and breadth of the Irish nationalist cause. She rubbed shoulders with landed Protestant gentry fond of Home Rule and reform. She championed armed rebellion and worked closely with radicals like Connolly. She even plotted the assassination of King Edward VII while she and her husband, Major John MacBride (executed for his role in the 1916 Easter Rising), were on their honeymoon in Spain. Those plans, along with the marriage, fell to ruin, a disaster for the couple and Irish nationalism.

MacBride was one of a number of men who Gonne confounded. The most famous among her suitors was Yeats. According to Bendheim, scholars generally agree that Gonne and Yeats eventually had a sexual relationship, although it was incredibly brief. (Especially given the interminable yearning agonies of Yeats’s youth, which might make him a candidate for the patron saint of incels.) Gonne, however, preferred they explore the limits of their “spiritual marriage,” that they visit one another via “astral” experiences in a friend-zone set in the upper firmament. Gonne dashed back to France, where she had her primary residence for 30 years, immediately after the “conventional coupling” with Yeats came to fruition. She then penned the following in a letter to “Willy.”

A short time later, she rejected Yeats’s proposal for a fourth time. Then the poet asked Maud’s daughter, Iseult, if she didn’t fancy taking the plunge with him, a proposal that, after a surprisingly long interval, she answered in the negative. Iseult ended up an assistant and lover to Ezra Pound before running off to Nazi Germany with another fascist who promptly left her for one of his German students and got a job in the Reich Ministry of Public Enlightenment and Propaganda. This proximity to fascism and fascists is not a historical fluke; it highlights a sinister aspect of both Maud’s life and the nastily conservative nationalism that ultimately triumphed in Ireland.

For many years, Maud was Lucien Millevoye’s lover, a familiar setup for a woman for whom “passion for a man was intertwined with politics.” The Maupassantian environment of Royat, a spa town, “provided a charming backdrop for Maud to fall for” this ultra-conservative Frenchman. The relationship was also typical in that Maud had selected a relatively unavailable partner (with whom she had two children). Millevoye was married; Maud was the other woman. Ironically, he suggested that Maud become “the Irish Joan of Arc,” stoking Maud’s Irish nationalist passion with his own French nationalist antipathy toward their shared enemy, England. Millevoye was not all that interested in Ireland — unless it could be made to aid his own cause of an ascendant France. The ever-energetic Maud was probably less available to Millevoye’s nationalist, not to mention erotic, plans as he would have liked, given her enormous popularity in the Irish movement. Bendheim offers a modicum of sympathy for the pathetic irredentist, abandoned by his “wealthy, ungovernable” lover to ruminate upon La Tache Noire in solitude. “Poor Millevoye,” she writes. He “had no idea” Maud would take her politics so seriously “when he invited her to be the Irish Joan of Arc.” “For Maud,” Bendheim emphatically claims, “politics trumped love.”

While Maud’s and Millevoye’s support for each other’s political projects jumped from initial enthusiasm to ambivalence and indifference, they shared one creed without reservation. They were both unequivocal anti-Semites. “Why or how Maud developed her anti-Semitism remains a puzzle,” Bendheim argues, but her strong opinions during the persecution of Captain Dreyfus were a focal point for her and Millevoye, who worked as a journalist in the French press. She and Millevoye believed Dreyfus and his supporters represented an evil that needed to be punished. After Dreyfus had been exonerated, Maud wrote in a United Irishman column that “The liberation of the traitor Dreyfus immediately after his re-condemnation has been the last stroke…. no French institution is now safe from the domination of the agents of the synagogue.” This abhorrent prejudice shocks and horrifies Bendheim, undercutting her personal investment in Gonne as a rebel and feminist heroine. Maud never changed her opinion about Jews.

Bendheim’s response to her subject’s crippling flaws was to adopt a critical stance committed to showing “her in the round.” Her portrait of Gonne sees her as complex, contradictory, enigmatic, flawed, and human. Anti-Semitism is something Bendheim has dealt with all her life. Her Jewish parents did everything they could to diminish, hide, and erase their Jewish identity. They eventually divorced and married into WASP families; the pair would scrutinize their new-born grandchildren for “Jewish” characteristics. Bendheim draws attention to her own experiences without moralizing, and this disclosure becomes a strength: she steps in and comments in ways that many other biographers wouldn’t. “I asked myself,” Bendheim confesses in the epilogue, “if I really wanted to complete this project. I had uncovered complicated shadows to this woman’s life — her deep-rooted, irrational anti-Semitism, her constant fabrications and embellishments, her absentee motherhood of her own children. It has been hard to like her.”

It is not the job of the biographer to like their subject, though, and Bendheim knows this. She does not forgive or condemn Maud, because that would be fruitless. Instead, she recognizes why the woman should be remembered in the first place, and then brings uncomfortable truths to the surface to draw a more complete picture.

But the complexity of Maud’s character is one of the things that makes her a compelling figure, and her tireless efforts on behalf of human rights and Irish independence deserve respect. Against all odds, she made her voice heard in England, Europe, and the United States. So much of what she fought for and against, and so much of what caused her anxiety, are issues women are still grappling with today. So, despite those aspects of her life and beliefs that were difficult to accept, it seemed important to set the record straight.

The Fascination of What’s Difficult goes a way toward doing just that.