You are here: Home / Books / Book Review: The Glory of “Full Dissidence”

Full Dissidence is not just about the corruption of professional sports. It is a fierce polemic that will alter the way you look at America. 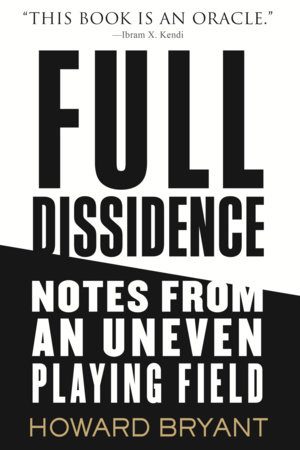 Howard Bryant is a local guy from Dorchester who for a few years wrote for The Boston Herald. He is now a star sports journalist at ESPN and a successful book author. His volumes include: Shut Out: A Story of Race and Baseball in Boston; The Last Hero: A Life of Henry Aaron; and Juicing the Game. His new book, Full Dissidence, takes on racism in professional sports and then moves on to comment on politics and life in America.

I heard Bryant on NPR recently talking about his book and what struck me is his willingness to tackle sensitive subjects with confident authority. To take one example from Full Dissidence: “The militarization of post 9/11 America, known as the Global War on Terror, transformed American culture — whether the subject is sports or policing.” Ever since the Vietnam War, when we blamed soldiers for fighting a war we never should have gotten into in the first place, America has been overwhelmingly positive about the military. Compounding this support is that, since joining the military is voluntary, the middle and upper classes are afflicted by a certain amount of guilt. The higher echelons feel as if they should support our military brothers and sisters — many of whom are from working class and minority ranks. After 9/11, America pushed the panic button: too few effectively questioned Bush’s war in Iraq. In retrospect, it was a tragic case of self-protective overkill. Bryant’s point is that, since 9/11, the military has been viewed as the good guys protecting us from the terrorists. A trust that has increasingly made us a military state.

Twenty years later, our forces are still hard at work policing the world. According to Bryant, there is an American military presence in 76 countries. Meanwhile, our “thank-you’s for your service” have been expanded to cover the police, which has in some ways has become an extension of the beneficence of the military. As Bryant points out, the police were viewed as heroes after 9/11 because of their efforts in New York. Cops have now been gifted with an excessive amount of military equipment and weaponry, including helicopters, grenade launchers. and machine guns. At the same time our airwaves are filled with cop shows, led by reality-based dramas like Cops to CSI spinoffs, that mythologize the police while earmarking minorities as the bad guys.

Bryant connects the promotion of the police and the military with professional sports, where teams and fans are encouraged to pay tribute to members of the armed forces and the police with standing ovations and Blue Angels fly-overs. These homages are often accompanied by “The Star-Spangled Banner.” Bryant points out that this conflation of sports, military, police, and patriotism is actually paid for by the military — our tax dollars at work! And it isn’t as if we have a choice in these matters. If you are at Fenway when this happens, you must stand and face the flag.

As a baby boomer I find the militarization of America particularly distressing because one of our claims to fame as a generation was ending the war in Vietnam. Now, here we are fifty years later spending 700 billion dollars a year on a gluttonous military tasked with maintaining an empire and protecting deposits of fossil fuel, the stuff that is poisoning the planet.

Full Dissidence begins with a section on Colin Kaepernick and the issue of dissidence in professional sports. “Whoso must be a man, must be a nonconformist!” Emerson said. You might remember that Kaepernick refused to toe-the-line and had the audacity to kneel during the national anthem to protest the murder of Black men by police. This challenged what the game of football had been bastardized to be: a quasi-military sport that promoted nationalist fervor by honoring the police and the military. In that sense, protesting during a game could be exploited by the Right and our former President as a symbolic form of treason. The nerve of that dude: using a religious act to object to violence, rather than promote it!

Full Dissidence is full of revelations that seem obvious once you think about them. Bryant points out that, because we’ve spent trillions on the military over the past twenty years, we have been forced to defund public universities and community colleges, which has meant made higher education increasingly expensive (and profitable) while growing student debt to unacceptable levels. And, when Bryant addresses looting during the past few years, he’s not targeting BLM protesters but members of the Trump Administration “shifting public money to private wealth.” What’s more, Bryant also is not afraid to criticize Black athletes — such as OJ and Tiger Woods and Madison Keys — who deny their Blackness.

“Bryant does not hold back” Ibram Kendi proclaims in his blurb. He’s right. Full Dissidence is not just about the corruption of sports. It is a fierce polemic that will alter the way you look at America.