The disc mixes classics and originals in a set of tunes perfect for late-night reveries or for anytime sojourns to a place of unhurried passion. 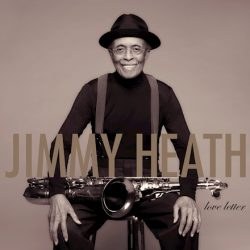 I had the chance to hear Jimmy Heath play live a few years ago in concert with his quartet at Bowdoin College. What sticks with me from that show is the strong but lyrical Philadelphia tenor sax sound that he helped to define (and refine). Also, I remember the way he put it to good use on such musical selections as “On the Trail” from the Grand Canyon Suite of Ferde Grofé and some classic dance tunes by Duke Ellington. A couple of his own compositions further confirmed that his concept of jazz was connected to the mid-20th-century zeitgeist in a recognizable but still very personal way.

Heath lasted well into the 21st century before passing last January at age 93. Capping his long career is a touching new disc of ballads called Love Letter. Featuring a strong lineup, including the impeccable Kenny Barron on piano and Russell Malone on guitar, as well as guest cameos by Cécile McLorin Salvant, Gregory Porter, and Wynton Marsalis, the disc mixes classics and originals in a set of tunes perfect for late-night reveries or for anytime sojourns to a place of unhurried passion.

Speaking of passion, an early favorite is the Heath original “Fashion or Passion.” The piece just glides along ever so gently on a slow walking tempo from bassist David Wong and drummer Lewis Nash. Both vibraphonist Monte Croft and guitarist Malone offer articulate solos. Heath’s tenor reminiscences here and elsewhere epitomize the relaxed precision of a proud professional still striving (never struggling) to communicate.

Employing the same accompanists, Heath switches to soprano for his “Inside Your Heart.” Subtle melodic variations remind these ears of Heath’s teenage Philadelphia compatriot John Coltrane, when he was manning a lighter horn.

The version of the Billie Holiday/Mal Waldron composition “Left Alone” may not reach the depths that we can imagine Holiday must have plumbed on the tune in person (she never recorded it!). But Salvant offers a touching interpretation, grounded by the breathy intonation of Heath’s tenor.

The saxophonist pays tribute to his early mentor Dizzy Gillespie with a softly stated take of the latter’s “Con Alma.” Heath engages with trumpeter Marsalis for a slightly noirish reading of Kenny Dorham’s “La Mesha,” with Marsalis supplying a melancholy but nonetheless bracing solo. Heath answers with feeling, as does Barron, creating moments when, as the old timers might put it, you take your squeeze out for one last dance.