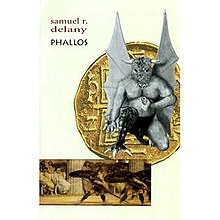 Samuel R. Delany is best known as “l’enfant terrible” who published his first novel at age 20 and then went on to win science fiction’s most prestigious awards — the Nebula (four times) and the Hugo (twice). Delany’s novels have always explored the dynamics of sex, gender, and identity on this planet as well as on a host of others. But his most recent work has left behind spaceships, aliens, and far-flung worlds in order to limn the mechanics of desire in more mundane settings, and his latest novel, the superb Phallos, continues this exploration with particular emphasis on erotic deviations from the norm.

The book opens with a self-conscious frame story: Adrian Rome moves to New York City and comes across a discarded copy of “Phallos,” a pornographic paperback that he’d once seen as a boy but had never gotten the chance to read. Fate shuffles the cards again and, for a second time, Rome loses the book. Attempting to locate another, he turns to the Internet and Delany’s novel begins in earnest.

A website posts a summary of and sizeable excerpts from “Phallos.” Delany’s novel becomes a playful text about a search for a lost ancient text: “a copy was rumored to have been in the possession of German classical antiquarian Joachim Winckelmann in 1768 — an item that the 19-year-old murderer Arcangeli presumably made off with, along with the golden medals, after garroting the 51-year-old scholar in a pension just outside Trieste.”

The pulp novel Rome is obsessed by recounts the sexual and social education of Neoptolomus, a youth of mixed Sicilian and Egyptian blood who comes of age during the rule of the Roman emperor, Hadrian. While conducting business in Egypt on behalf of his employer (also a bedfellow), Neoptolomus is caught up in the cult of “the nameless god.” An obscure deity represented as bull-headed, winged, and taloned, his chief feature is a jewel-and-gold encrusted phallos, which has been stolen. Immediately after the violation of the nameless god’s statue, Neoptolomus is kidnapped, enslaved by a desert brigand, and made into a catamite. After being dragged through the desert with this band of thieves, he is sold off and released.

Obsessed with discovering the whereabouts of the sacred phallos, Neoptolomus embarks on a series of adventures that take him all over the Mediterranean world and involve him with all manner of men as well as several women. During these encounters, he is given varying explanations for why the phallus is so coveted. An Alexandrian scholar insists its value derives from secret wisdom written on parchments contained inside the hollow member, while the High Priestess of Bellona, for example, holds that, jewels and gold notwithstanding, the phallos is a worthless trinket. The nature of this hidden knowledge is also in a state of flux; it’s rumored to be about everything from deeds to land along a bank of the Nile (so declares a drugged Sybil at Cumae) to the mysteries of “the master craftsmen of Atlantis who survived the continental decline.”

At this point in the story Delany’s mystery takes a postmodern turn. It becomes a meditation on a branch of indeterminacy theory, which states, more or less, that there are any number of plausible explanations for a given event or phenomenon. In the case of the phallos, there is even the theory (proposed on the website) that it “is simply a set of multiple imitations and distractions, of markers in a plot of plottings that web together the material world, an extraordinary fiction disseminated over the land to net a host of other fictions about power …” and there is no actual original.

Slim as this volume is (a mere 95 pages), it is dense with commentary on the human condition. While sex is, of course, integral to the book, Delany digs deeply into the nature of desire itself: “We learn that desire always turns on a constellation, with endlessly repeatable elements, which can … be found any number of places, elements that create a situation that can occur with any number of people, things, or other situations.”

For Neoptolomus, there is emotional absence at the center of passion. Even when he meets the man who is to be his life-long partner, Nevik, an ebony-skinned Nubian, he still feels a lack in their physical intimacy. “Somehow the fact that it had happened all before, that it repeated a tale already told, made it a ritual that, no matter how intense our coupling, nor how loud he or I groaned … only highlighted the pulsing emptiness at the core.”

The “excerpts” of the hypothetical porn novel (does it really exist?) account for some of the most entertaining writing. A self-conscious throwback to semi-archaic diction and syntax, at its peak the text Rome hunts dives into purple pools of prose: “Slurring its susurrus about the foam-menaced rock, throughout its resounding surround, its slough and slosh, its many-voiced boisterousness over wet chaos, storm-bloated dark listed away, singing of drenched depths, dimensions, the recurrent currents supportive and silent, the monsters that finned and glimmered within.” By and large, however, the writing is more like the following description of an aged servant: “With bumpy wrists and elbows and … knees and ankles pushing out his worn suede skin, perched on a piling at the Syracuse port, a tufty-haired codger waited for us as we strolled ashore. With broad fingers he tugged some parchments from under his leaked-in loin-rag. Left and right of it, hirsute flesh lapped from the cloth bound slackly between his stringy thighs, for his scrotum had bloated to the size of paired turnips. He held the packet up before breasts collapsed like a crone’s, dugs as thick and as gnarled–and grinned over his one tooth, brown, pitted, and off-center.”

The majority of the sex has been elided or euphemized, but there is still plenty that the reader should be prepared to encounter in glorious detail. Phallos is a richly written, irresistible read: a love story, a mystery novel, and a romp through a postmodern theory or two disguised as a picaresque odyssey through the ancient world.