I’d have to give the edge to Dave Liebman in terms of innovative creative reach. But Lakecia Benjamin more than holds her own in how she gives revitalizing attention to some very important musical roots. 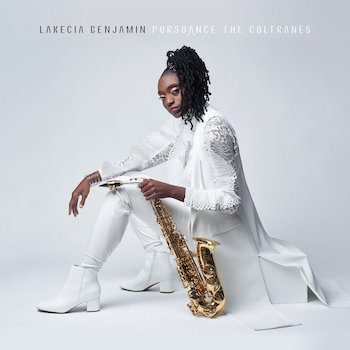 With new releases of vault material, and a renewed appreciation of his creative genius, John Coltrane (1926-1967) seems to be very much in the hearts and on the minds of today’s jazz aficionados, young and old. Given the current COVID-19 crisis, this is heartening. The master’s music continues to inspire, supplying needed strength by transporting listeners into spiritual realms.

Fluent in Latin, pop, R&B and funk, as well as jazz, the youthful alto saxophonist Lakecia Benjamin puts all of her influences to good use in her latest disc. Pursuance: The Coltranes surveys the musical careers of both John Coltrane and his wife Alice Coltrane (1937-2007).  John was the towering figure. But, over the years, appreciation for the meditative musical excursions Alice took after her spouse’s passing has been growing, particularly through the work of artists such as Kamasi Washington and Shabaka Hutchings.

Benjamin shares her spirited homage with a large coterie of first-rate musicians. Among the saxophonists are Gary Bartz (a Benjamin mentor), Steve Wilson, Marcus Strickland, and Greg Osby. Vocalists Dee Dee Bridgewater, and Jazzmeia Horn also contribute to an album that successfully builds on some of the wonders in the Coltrane source material.

Bartz and Benjamin lead the charge across the modal contours of “Liberia,” a powerful early Coltrane piece that is well treated here. A pop version of “Central Park West” is broadened by some strong scat-singing from Horn.  The take of “Syeeda’s Song Flute” toasts the tune’s playful lyricism by way of some fleet runs from the leader, which are matched by Keyon Harrold’s brawny trumpet work. Bassist Ron Carter, a still very active veteran of the era celebrated on this disc, also contributes, as does co-producer Reggie Workman, another musician who had first-hand experience with the Coltranes.

The ever-descending lines of “Spiral” have Wilson stoking Benjamin’s fire above a Latin rhythm. “Acknowledgement” and “Pursuance” are all-too-brief cuts based on Coltrane’s masterpiece A Love Supreme; they engage through squalls of expressive energy from the leader and Bridgewater’s wordless vocalizations. Marc Cary’s piano solo both sings and zings on the latter piece. The old saw about always leaving them wanting more fits these brusque outings.

Alice Coltrane’s music took the fire of her husband’s innovations and used it to light a flame dedicated to the cause of heightened consciousness. Her reflective journeys fused gospel fervor with Eastern concepts of contemplation. Among the major offerings in Alice Coltrane’s oeuvre is “Walk with Me,” a danceable rhythmic ramble. In her version, Benjamin makes use of advanced, range-stretching techniques, her restless excursion accompanied by a mournful invocation supplied by Regina Carter’s violin.

The traditional “Going Home” starts off with some resonant clarinet/flute harmonies and arpeggiated flourishes from Brandee Younger’s harp.  The arrangement goes on to embrace the theme’s sentimental core, with some added pop-anthem dynamics suggesting that the tune’s transformative uplift is available to everyone.

“Om Shanti” dovetails chant with soulful flavorings, while “Turiya and Ramakrishna” treats a melancholy landscape with intriguing mellowness. A bluesy piano nicely complements Benjamin’s expressive solo — the combination demonstrates how refreshingly the album crosses over (in more ways than one) to its own place of heartfelt homage. 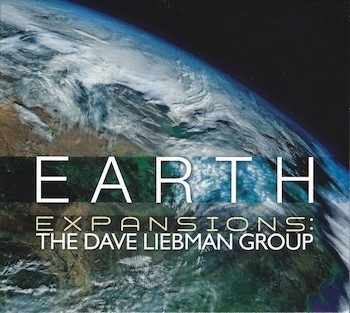 Veteran Dave Liebman’s Coltrane connection began with his trips as a teenager to hear the saxophonist play live in New York City. He later got to play in a band led by Elvin Jones, the drummer forever associated with the classic Coltrane Quartet of the early ’60s. In recent years, Liebman was part of a notable Coltrane tribute album with Joe Lovano. (Arts Fuse review)

Alice Coltrane released an album called The Elements in 1974, and now we have Liebman completing his quartet of discs devoted to the same themes. Earth, in the words of the composer/leader, is a “recording celebrating different aspects of our planet.”

The emphasis on processed sound here is a notable departure from much of the group’s previous work. Electronics also figure prominently and, when combined with the leader’s soprano, the composite reminds this listener of some of the work of Jane Ira Bloom.

The “Earth Theme” starts us off deep in the ozone. Distancing electronics pave the way for the band’s slow establishment of mysterious matter(s).  Earthwise, could this be the beginning and a foreshadowing of the end?

Liebman explains in his notes that intervals, color, and texture are central to the disc. After a twangy bass interlude, we’re taken into a nerve-wracking “Volcano/Avalanche,” a composition that lives up to its title. There’s anxiety-producing power to spare. High and low electronic bleeps and squalls are attention-getting examples of Liebman’s desire to draw on a broad sonic palette.

A “Percussion/Flute Interlude” moves in a more organic direction, and that is followed by “The Sahara,” a landscape dominated by windswept harmonies and an electronic tumble that recalls Liebman’s time with the electric Miles Davis in the early ’70s.

“Grand Canyon/Mt. Everest” takes a slow hike through some heady terrain. “Concrete Jungle” picks up the pace considerably: the soprano sax/synthesizer harmonies give way to a Marino trot over a quick, shuffling beat. Avey’s piano fragments add to the hustle and bustle before he switches to electronics and trades lines with Liebman.

“Dust to Dust” slowly explores a nebulous electro-acoustic environment, with the leader’s probing melodic line providing direction. “Galaxy” takes us back to neo-Milesian turf via a stop-and-start cadence with Liebman appending piquant commentary.

While both Liebman and Benjamin tap into their monumental forebears, I’d have to give the edge to Liebman in terms of innovative creative reach. But Benjamin more than holds her own in how she gives revitalizing attention to some very important musical roots.