Will Birch’s biography Cruel to Be Kind effortlessly details the six-decade career of rocker Nick Lowe.

We’ve known each other for about 45 years,” says Will Birch of the singer, songwriter, producer, bassist, etc. Nick Lowe. 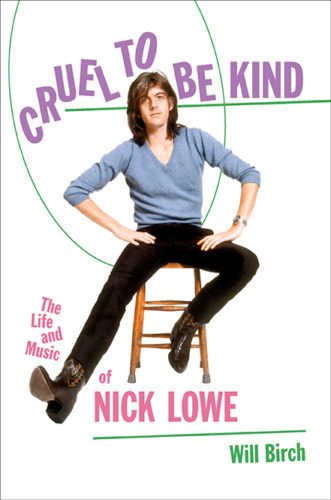 Before becoming a music journalist, historian of pub rock, and biographer of Ian Dury, Birch was a lyricist and drummer for the British bands The Kursaal Flyers and The Records. The former included the Lowe-penned song “Television” on their 1975 album The Great Artiste. Before the latter broke up in 1982, four years after recording the power pop classic “Starry Eyes,” Birch had started working for a management company whose clientele included Lowe’s then-wife, Carlene Carter (daughter of June Carter and stepdaughter of Johnny Cash).

In a zigzag of a career that is now in its sixth decade, Lowe’s reputation — if not his renown – was as secure by 1981 thanks to his having produced the first British punk album (Damned Damned Damned by The Damned), LPs by pub/punk rockers Dr. Feelgood, Graham Parker, and Wreckless Eric, and albums one through five by Elvis Costello.

The fact that he nearly reached the American top 10 in 1979 with his own single “Cruel To Be Kind” served to raise a profile that might have otherwise remained low(e) on our side of the Atlantic.

Despite an exquisite array of laurels upon which he could have rested, Lowe has maintained a pace since the early ’80s that has kept his stature untarnished. Widespread fame continues to elude him, which he is probably fine with, but a cover of his then-18-year-old song “(What’s So Funny ‘Bout) Peace, Love and Understanding?” on a 1992 film soundtrack moved 18 million units in the U.S. alone.

In the current decade, he has toured with Wilco and Los Straitjackets (click for a 2014 Arts Fuse review), thereby keeping him untethered to a specific genre or restricted stable of cohorts.

Birch effortlessly captures all of this and more in Cruel To Be Kind: The Life and Music of Nick Lowe (Da Capo). With Birch as a guide, information hitherto obscure to the reader sinks in as if he or she has known it all along. And if impressing and surprising lifelong Lowe fans weren’t enough, the author succeeded in unearthing genealogical details that prompted the musician himself to reply, according to Birch, “No shit?”

Birch recently spoke to The Arts Fuse by phone from New York City, where he had arrived to participate in a sold-out discussion at Strand Book Store with Lowe and WNYC’s Alison Stewart.

The Arts Fuse: How do you typically decide on a subject for a book and did that process apply to Cruel To Be Kind?

Will Birch: This is only my third book, and because they take a long time for me to research, years and years really, it has to be a subject I’m passionate about and know. It’s the cliché, “Write what you know.” So I do know Nick Lowe, and I did know Ian Dury, so it’s my territory. Over the years I’ve had indirect contact with one or two journalists or news people who have wanted to do a book on Nick, but none of those ever came to fruition. I figured it was only a matter of time before somebody would have a go at a book on Nick, and I thought, “Well, it should be me.” I just felt I had to do it.

AF: Did it ever matter to you whether Nick Lowe authorized this biography?

WB: Whenever I see “authorized biography” on a book jacket, I immediately think it’s been sanitized if the subject is living. You know, his or her people have kind of okayed it, and taken out the nasty bits. My publishers asked me if it was authorized. That was almost the first question I was asked when I was pitching the book a year or two ago. I had to say no, but it was done with Nick’s blessing and he knew all about it, he’s given me dozens of interviews, and I think he’ll be supportive of it when it comes out.

Although, he’s blown hot and cold about the thing. We did go through a period where he didn’t believe I’d ever finish it. That’s his sort of shtick, his joke: “Oh, I thought you’d give up.” You’ve probably seen interviews where he said he sort of disapproved of it, but I think he’s got his tongue in his cheek a little bit.

AF: Were any other titles for the book under consideration or was Cruel To Be Kind the obvious choice?

WB: Yeah, it had to be because really, what we’re trying to do here is sell books. It’s the recognition factor. Nick isn’t really that famous. He’s a cult figure. He’s passionately followed by quite a few thousand people around the globe, especially in America, who will turn out to see his shows. He’s got a really good loyal following, but the person in the street [says,] “Uh, Nick who? Do you mean Nick Cave? Who are we talking about?” Consequently, we couldn’t afford to be too clever with the title. If you say “Cruel To Be Kind,” people say, “I know that song.” So obviously it had to be.

AF: What does it say about Nick Lowe’s career that his biggest payday came from a cover that most of his fans probably never heard? I don’t think that a lot of his followers went out and bought The Bodyguard soundtrack!

WB: No, I doubt if they did. Curtis Stigers was doing the song in his club act and people who were putting The Bodyguard soundtrack album together heard him do the song on stage and they said, “We need that song for the soundtrack album.” Although, I don’t think you actually hear it in the movie. (laughs) We’ve listened hard and we can’t hear it!

That album sold a lot of copies and Nick made a lot of royalties as a songwriter. And what that enabled him to do was to record at his own pace. The second chapter of his career started with The Impossible Bird in the early 1990s, which was funded, really, by that money. He could work with the musicians he wanted to [and] take his time.

AF: Do you think it is a sort of good karma?

WB: Well, he deserves it, really, because he’s just written loads of great songs and it was a good break. But we all know really good songwriters, don’t we—for example, Warren Zevon comes to mind—who never sold the records that his phenomenal talent deserved. It’s the same as people like Richard Thompson or Graham Parker, you know, these great people, they just don’t get those breaks. I think it’s good that Nick did and I’m pleased for him.