You are here: Home / Books / Book Review: “De Gaulle” — An Exemplary View of the Man and His Times

For anyone interested in the man or that era, De Gaulle is indispensable. 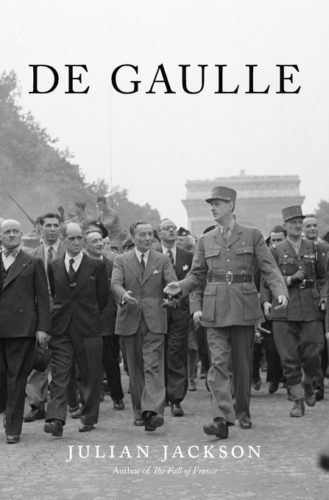 There was a joke about Charles de Gaulle in which his presidential aides brought up to him the subject of where he thought he should be buried that would be consistent with his greatness. One aide suggested under the Arc de Triomphe. “So public and vulgar,” de Gaulle replied. Another suggested Les Invalides, alongside Napoleon. “With that corporal?” the general remonstrated. Finally, they suggested building an enormous tomb, 12 stories high in shining polished granite with gold doors, in the Bois de Boulogne, a public park. De Gaulle smiled approvingly but added, “but such expense for only three days?”

For most people in the English-speaking world, de Gaulle is synonymous with Gallic arrogance, conservatism, and a dislike of Britain (along with just about every other country that wasn’t France). His conflicts with the allied powers in the Second World War, his withdrawal from NATO, and finally his lack of comprehension of the events of 1968, suggest a leader who was so convinced of his own rectitude that he often disregarded facts on the ground. Biographer Julian Jackson, however, has provided a far more sophisticated accounting of the man, showing empathy for a leader who believed fervently in his own moment in time, a man who was emblematic of France’s  fatalistic view of itself — that it must suffer first, before it prevailed.

De Gaulle was born to a middle-class Catholic family of traditional values. Very religious as a young man, it was imagined that he might become a priest, but a different institution beckoned him, a career in the French army. Jackson notes that the generation born after the 1870 defeat at the hands of Prussia felt it as a personal wound. Smarting, they felt there was need for payback after such indignities as the loss of Alsace and Lorraine. He entered the military academy at St. Cyr and was a young officer in World War I. Wounded several times and held prisoner for 32 months in Germany, he survived with not only scars, but a vision. His ideal of France was almost monarchical, revering Vercingetorix and Charlemagne more than democracy. Like many soldiers, he detested politicians, although he eventually became a masterful one. De Gaulle wrote books and articles as a junior officer, and as a prisoner of war had time to formulate theories about war and the geopolitical upheavals of his time. He foresaw the inevitability of another conflict with Germany. In a 1917 lecture he gave in his prison camp, he predicted, “this war is not the last. Whatever the horrors, sacrifices, grief, and tears that it has brought in its wake, men have not been changed by it. For some years there will be a sense of shame and fear; then the smell of blood will fade . . . and everyone will sing its glories.”

After the fall of France in May of 1940, de Gaulle escaped to London with what was to be the French government in exile. He was a thorn in the side of Churchill, but eventually got his demand that a French unit be part of the liberation of Paris. Eisenhower and Montgomery thought him an egotist, but there was certainly merit in his argument that France be allowed to reclaim some of the honor lost in the swift and utter collapse in the face of the German invasion.

De Gaulle envisioned himself as the man on horseback who saved France. He made sure he was in the front row for the photo op on the day the victors marched down the Champs-Elysees. Others were there too, like Leclerc, but le general pushed his way to the front while in London, in the process becoming the country’s de facto leader, the heir apparent in the formation of a new government. Others were astonished at his hubris, at how summarily he took charge. One colleague noted “Lucifer was the most beautiful of the angels.”

In a show of national unity, the postwar government originally included some communists. But de Gaulle was a rightist, and did his best to marginalize them. Unity was his goal — which meant him at the head. He treated Resistance leaders who had been underground for four years as nothing compared to those who had been with the regular army. Dismissive and overbearing, he got his way because the French needed to restore themselves at any cost.

It is interesting to look at Jackson’s index under “De Gaulle – Personal Characteristics,” we find words such as “arrogance,” “authoritarianism,” “coldness,” “contempt for human nature,” “imperiousness,” “inability to admit error,” and “racism.” (Sounds like someone else more contemporary, n’est-ce pas?) All these characteristics of a bull in a China shop, however, did not slow down his advance.

France did recover economically from the war, but de Gaulle left public life between 1946 and 1958 due to the incessant squabbling between factions. Two dozen governments were formed and fell in the Fourth Republic. De Gaulle was called in from retirement and persisted in politics until 1969.

As a writer and thinker he often expressed contrarian opinions, but they did not hurt his career. Considered brilliant, but an odd duck, he ascended through ranks at predictable intervals. Like Eisenhower, he made his mark as a staff officer and instructor with limited command of actual troops. Although patriotically French and broad in his reading, he had a low opinion of “classic” French writers. Of Zola he said, “This man really has the genius of the dung heap.” Stendhal did not fare any better, as he summarized the character Julien Sorel as someone “who spends all his time analyzing himself.” Lastly, he disliked Flaubert and the depictions of the republicans of 1848 as “discontented failures of all kinds.”

On becoming president of France facing the complexity of the postwar era, he asked, “How can one govern a country which has 258 cheeses?” He once wrote in a book on leadership that “great leaders needed to display mystery, ruse, and hypocrisy.” His ideals, it seems, could not be brought to fruition without the exercise of considerable darkness. While others may think this attitude informed every decision he made, Jackson argues that his strategy was not always as able to shape events as he would have wished. Regarding the Algerian crisis, where that country became a hotbed of unrest and violence in order to free itself from France’s colonial dominion, Jackson sees the limitations of de Gaulle’s subterfuge: “Nowhere does he seem to have followed these precepts more faithfully than in his approach to Algeria. . . . or is the truth that he had no control over events – that what seemed like duplicity and calculation were in fact hesitation and improvisation?”

De Gaulle’s family life was private: he was married to Yvonne and had children, including a Down’s Syndrome daughter he adored. Sentimentality was only en famille; regarding the rest of existence, he was a soldier. He lived fewer than two years after resigning. Although he still had a parliamentary majority, perhaps he knew his was the voice of the past not the future. He was weary and returned to Colombey to write his memoirs.

Jackson, despite being critical of de Gaulle for his personal shortcomings, deems that he should be considered “great” because of his enormous impact on the postwar period. This biography is detailed and exhaustive in terms of its sources, but it is not exhausting to read. Do not be daunted by the page count — for anyone interested in the man or that era, this is an indispensable read. Many biographies suffer from being little more than well-researched lists. There is no narrative verve, no storytelling skill. Jackson goes beyond the expected documentation, exploring subtle areas of cause and effect, providing psychological nuance and sociological backgrounding. By the end, we have been given an invaluable sense of de Gaulle and his times.

Thomas Filbin is a freelance critic whose work has appeared in The New York Times, the Boston Globe, and The Hudson Review.