Rarely does a book leave me questioning the ways in which I understood, or thought I understood, the construction of some of the most formative solos in jazz history. 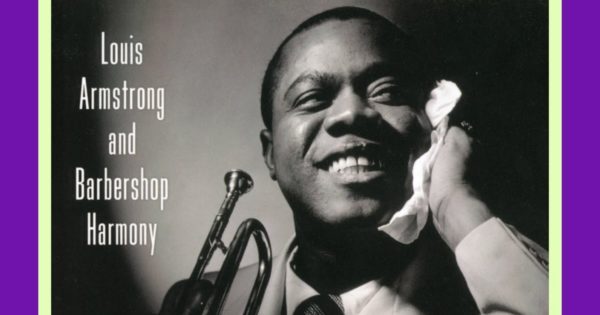 Author Vic Hobson is British. Sometimes it takes someone from outside the U.S. to shake up our ideas about popular culture. In this case, jazz. Hobson’s book is only 173 pages long, but for anyone invested in the early years of jazz, it packs an illuminating punch. It induced a hard look on the part of this reader about long-held, if somewhat fuzzy, theories about how jazz soloing was shaped. Specifically, the genesis of the innovations of Louis Armstrong in the ’20s that created a template for future jazz soloing throughout the century.

Because of the lack of recorded evidence, the early days of jazz are shrouded in a certain amount of mystery. There is no definitive version of how the music’s formative elements came together. In the 19th century, black and white musical cultures intermingled. On the one hand, some discrete musical forms — field chants and hollers, ring shouts, spirituals, and preaching techniques were eventually subsumed under a larger blues umbrella. On the other hand, African-Americans played brass and strings in circus bands, string bands ,and marching bands, becoming familiar with European compositional elements. Parlor music, a kind of watered-down version of lieder, provided encounters with techniques that black theater and ragtime composers drew on for their tunes. Barbershop groups performed a range of material, some of which can be classified as loosely deriving from Western sources. Vocal harmony itself is not a technique that was ubiquitous in African music and, to some degree, African-Americans adapted it from white choruses and church choirs. Again, we are talking about conditions in the  19th century. What we would recognize as jazz would not come along for about 10 years (If the mythical Buddy Bolden cylinder is ever found, that chronology might change).

The prevailing theory has it that, out of this maelstrom of cross-influences, blues and ragtime made elemental contributions, but that, in large part, the “sophistication” of jazz arose because of the influence of European harmony.

This is the place where Hobson’s book sets out to be disruptive.

In one sense, Hobson bypasses the customary logjam. He doesn’t examine the usual suspects that are seen as contributing to the formation of jazz. Rather than trying to parse the variety of influences, the volume argues that the importance of singing has been ignored or undervalued. Hobson argues that the kind of singing that influenced some of the most important early jazz musicians — especially Louis Armstrong — was close harmony singing: bass, baritone, lead tenor, and second tenor. What became known as barbershop quartet singing.

If people hear the phrase barbershop quartet now, it probably conjures up visions of white guys with red striped shirts and handlebar moustaches. The same kind of stereotyping  happened to traditional jazz, when it became “Dixieland.” Fairly recent scholarship, however, suggests that barbershop singing had African-American roots. Ironically, the group that spurred the revival of barbershop singing in the late ’30s, and which still exists — the Society for the Preservation and Encouragement of Barbershop Quartet Singing in America (SPEBSQSA) — declined black participation in the organization for decades.

Hobson brings in the protagonists whom we know had a major hand in creating jazz: Buddy Bolden and his musicians Willie Cornish (trombone) and Brock Mumford (guitar), W.C. Handy, Kid Ory, Johnny Dodds, and King Oliver. All of these musicians had a background in close harmony singing. Let me add as an aside that Hobson does a terrific job filling us in on their biographies as they enter his story.

None of these players have a story as well chronicled as Louis Armstrong. Although they sometimes provide contradictory information, Armstrong’s autobiographies and interviews (as well as the biographies) give us a very full picture of his early musical life. And, in limning the story of Armstrong’s early singing experiences in great depth, Hobson crafts a model that that would be easily applicable to those other (mostly New Orleans) musicians. Having read a lot about Armstrong myself, I was almost embarrassed at not having paid enough attention to his early singing experience. He himself often talked about the importance of singing in his playing, but most scholars emphasize Armstrong’s love of opera and his occasional quoting of same in his solos. 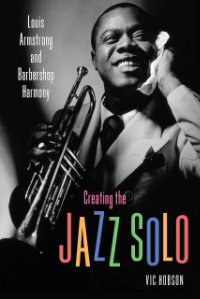 Although there is some disagreement about these dates, Armstrong seems to have begun singing when he was about 9 years old; c.1909. He started playing hit-or-miss cornet a few years later. He didn’t undertake the instrument seriously until about 1913 and, of course, continued to sing his entire life. His early singing experiences and of these other early jazz musicians was a combination of the solfege (the system of do-re-mi, etc.) that was taught in school as well as experiences on the street. It’s odd (at least to me) that, though solfege was widely taught, relatively few of these musicians could read music well. A number of them eventually improved their music reading skills while aboard the steamships of the Streckfus line which plied the Mississippi, under the musical direction of Fate Marable, or by playing in theater for acts that required consistency in the music.

So, in barbershop groups, it was often the case that only one person could read. That performer would acquire the sheet music and discern what the proper melody line was for a new song that the group wanted to sing (remember, this is mostly before the wide availability of recordings). He would sing the melody and the other members of the group would find their proper parts, based on the sound that had become acceptable practice in the quartet format — a sound that was pretty codified.

Armstrong and several of the other musicians explicitly say that this was the technique that instrumental bands would also use to learn new material. The part being taken by a given instrument was dictated by the range in which it played: tuba or string bass doing the bass, the baritone part being carried by trombone and the two tenor parts by trumpet and clarinet.

Ultimately, the success or failure of the specifics of Hobson’s theory stand or fall on musicological grounds. It would be very challenging for anyone who doesn’t have a background in music to engage on this level. He tries to clarify matters as much as he can, transposing almost all his musical samples to the key of “C” and fully explaining what any given chord means. The process, for me, was made more difficult because of my prejudices regarding his ideas. When I listen to early Armstrong music, or read transcriptions, I tend to filter my reactions through received wisdom about why particular notes were played. That is, I accept the primacy of the blues scale and the traditional presupposition that a “European” system of harmony was, in some way, guiding the musician through a solo.

After examining a plethora of Hobson’s examples, I began to come around to his way of thinking. What, exactly, was I buying into?

As simply as I can put it: There were techniques of what is called voice-leading that are applied in barbershop harmony. These are the rules that determine what the next note can be, bearing in mind all the other notes in the chord that have to be taken into consideration. I assume that these techniques were predicated on some combination of what sounded good in that era and what was feasible for someone to sing. In a number of cases, this meant choosing notes that would not be correct in a standard harmonic sense. Such notes might be “out of” the chord as then understood and/or create dissonances that were supposed to be avoided. “Snakes,” “swipes,” “funnel harmony” are some of the terms used to denote the moves that a voice could or would make.

Hobson does close analyses of Armstrong solos in “Copenhagen,” “Heebie Jeebies,” “Potato Head Blues” and other tunes in order to show the reader that many of the choices Armstrong makes are rooted in his considerable background in barbershop singing. He comes up with ample quotes from Armstrong to back up the idea that he was not playing the chord, per se, but how the chord sounded to him and what that sound led him to play, as filtered through his long experience with close harmony singing. I had, in fact, often wondered about certain note choices that Armstrong made in his solos and this explanation helped clarify some of these choices for me.

The non-musically literate might find the technical parts of the book tough going but will still enjoy reading the book for the rich detailed history it provides about the music and the biographies of Armstrong and other important jazz figures. Veteran readers of jazz history and musicians will find new wrinkles here and may well become engrossed, as I was, in figuring out the musical ciphers that Hobson examines. Rarely does a book leave me questioning the ways in which I understood, or thought I understood, the construction of some of the most formative solos in jazz history. Kudos, Vic Hobson.