Despite its occasional confusions, this is poetry I will return to — to re-experience A.E. Stallings’ wit, wisdom, and word-smithing. 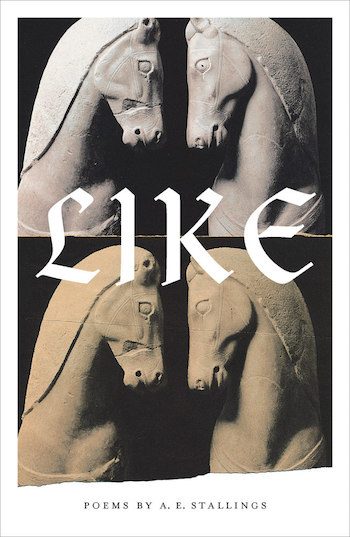 Contemporary poetry has something in common with contemporary art. It isn’t always poetry and it isn’t always art. In addition, to make things worse, Americans are obsessed with the new. In poetry, this yen for novelty manifests itself in a call for cutting edge, hybrid, innovative work. The results? At times overly precious writing that ranges from attempts to integrate prose and poetry to poems that are indecipherable collections of fragments and non sequiturs. MFA programs abound that perpetuate the problem. The upshot is that readers do not know what to make of poetry — avoiding it, even hating it.

At the same time, partly because of our current political crises, there is the assumption that poetry is one way in which we can understand trying times. Verse is suddenly gaining in popularity and this has led to the poetry that we find in the music lyrics of Kendrick Lamar, the verse of Claudia Rankine, and others. It isn’t always exceptional, but it has value and meaning. Perhaps interest in this kind of verse will lead to some picking up some truly innovative poetry — the kind found in Like by A.E. Stallings.

You may or may not love the paintings of Vermeer, but there is no denying that he is an artist who is both creative and skillful. This is true of A.E. Stallings. You may not appreciate everything she writes, but there is no doubt that you are reading serious verse, and that she is both inventive and adept. She is also witty and erudite. She takes on a wide range of subjects, from toys to crows to Greek mythology (she has written translations and is a classics scholar). She also tackles a variety of forms.

The charge against writing in different verse forms in English is that the writer sometimes, for the sake of hewing to the rules, is forced to settle for awkward wording: “whose woods these are I think I know…” Stallings is sometimes guilty of that fault. Some forms also invite the writers to indulge in the hyper-clever, and this is also true of Stallings. The title poem is a sestina. There are by my count 41 “like’s” in the poem, and unless you’re eleven years old you are sure to find it annoying. On the other hand, in a poem that appeared in The New Yorker, “Shoulda, Woulda, Coulda,” she is both amusing and substantial:

The mood made him tense—
How she sharpened conditional futures
On strops of might-have-beens,
The butchered present in sutures.He cursed in the fricative,
The way she could not act.
Or live in the indicative,
Only contrary to fact.Tomorrow should have been vast,
Bud-packed, grenade-gravid,
Not just a die miscast.It made him sad, it made him livid:
How she construed from the imperfect past
A future less vivid.

If you found yourself searching for the definition of a word or two, you’re not alone. But this is a characteristic of writing that challenges, rather than caters. It forces us to look up or dig deep into our memory for the meaning of words. It is a type of literary display — as are allusions. But she isn’t obnoxious, parading her learning as T.S. Eliot does in The Waste Land, with its quotations in Greek and Latin.

Stallings is also able to pull linguistic rabbits out of a hat in gratifying ways for the conclusions of her poems. A poem about a pencil ends with the line “And time, the other implement/That sharpens and grows shorter.” There are poems here that look at Greek myths from new angles, one about Alice in Wonderland (“Alice, Bewildered”) and others that deal with bedbugs, lice, and a pull toy. There is a long (15 page) work about losing things that loses me halfway through.

Still, despite its occasional confusions, Like is a book I will return to — to re-experience Stallings’ esprit, intelligence, and word-smithing.