Pianist Alexander Melnikov has come up with one of the still-young year’s most compelling discs, Deutsche Grammophon releases an aural train wreck.

Alexander Melnikov takes a fairly academic question – how do the physical properties and limitations of a given instrument effect the outcome of a composition – and turns it into one of the still-young year’s most compelling discs. How does he do it?

Four Pianos, his survey (on Harmonia Mundi) of music by Schubert, Chopin, Liszt, and Stravinsky features one piece by each composer played on an instrument similar (or identical) to the ones they were written and/or premiered on. From a technical and aural standpoint, the differences are often striking.

In Schubert’s Wanderer Fantasie, this means keyboard playing of much greater technical exposure than you’d hear on a modern instrument: there are few places to hide on this piano (a ca. 1830 Alois Graff keyboard from Vienna) and its sonic profile is narrower. Harmonically, though, there’s a strong sense of progression, of each key occupying its own, distinct tonal ground. Thus, the contrast between the first movement’s opening, bright C major and the second’s C-sharp minor (for one example) stand in sharp relief.

Chopin’s op. 10 Etudes (played on an 1837 Érard) share a similar harmonic richness, movement-to-movement, and also a stirring warmth of tone.

Liszt’s Réminiscences de Don Juan are played on a more modern instrument (here an 1875 Bösendorfer) and the greater intensity, in both the music’s passions and the keyboard’s attack, is striking. So are the instrument’s resonant capabilities, which give the score’s biggest moments a booming, orchestral heft.

Stravinsky’s Trois mouvements de Pétrouchka share quite a bit – from gestures to textures – with the Liszt, though Melnikov’s last piano (a 2014 Steinway) offers the most regulated control over the instrument’s technical capabilities.

Regardless of those mechanical differences, Melnikov consistently turns in exciting interpretations. The Schubert positively shines once one gets used to the instrument’s rather condensed projection: the triplet arpeggios near the end of the third movement and the whole of the finale sparkle. His Chopin is similarly brilliant and elegant, even if the first Etude almost runs off the tracks. Wit and virtuosity are the hallmarks of the Liszt and Stravinsky selections: from the variations on “La ci darem la mano” in the former to raucous finale of the latter, Melnikov’s performances are powerfully played and smartly shaped, always drawing out the coloristic strengths of the instrument at hand.

Alexander Melnikov’s performances are powerfully played and smartly shaped, always drawing out the coloristic strengths of the instrument at hand.Click To Tweet

In all, then, Melnikov demonstrates a staggering progression, not so much of technique (all four works traffic, interestingly, in similar, if not identical, demands) as of the piano’s capabilities: it’s all but impossible to imagine the Stravinsky, for instance, played on the Graff keyboard (and not just because its range is too small). On top of that, his performances are vigorous, insightful, and emotionally honest, a perfect example of musical excellence and historical awareness feeding off one another to add up to more than the sum of their parts. 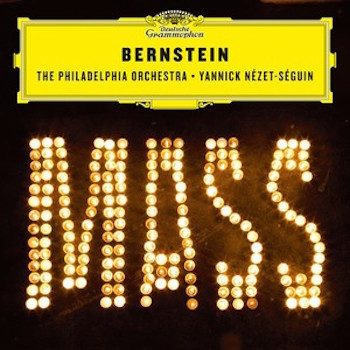 What does one do with a CD that’s got a strong performance but is terribly recorded? That’s the dilemma with Deutsche Grammophon’s (DG) new recording of Leonard Bernstein’s Mass.

Indeed, the playing and singing, from what one can make of it, is quite good. Yes, some tempos are too fast and there are a few moments of discoordination between singers and instruments (it’s was taped live). But, on the whole, conductor Yannick Nézet-Séguin and the Philadelphia Orchestra have a good handle on Bernstein’s style, play with a strong sense of rhythm and color, and shift between Mass’s eclectic mix of genres fluently.

On top of that, the singing’s mostly impressive. Tenor Kevin Vortmann makes for a sympathetic Celebrant, with a beautifully-sung “Simple Song,” and fervent “Lord’s Prayer” and “I Go On.” The climactic breakdown scene is a bit on the light side, at least compared to Alan Titus or Jubilant Sykes in the part, but Vortmann’s grows in intensity as it progresses.

The many lesser roles are, by and large, well-cast, though there’s some unevenness part-to-part (as is the case in every recording yet made of Mass).

All that good is for naught, though, thanks to the recording’s engineering.

Voices and instruments are often badly unbalanced. Lots of moments are simply shrill or too forceful: the marching band in the “Prefatory Prayers”; brass and winds, generally; the handful of appearances of the organ (in the “Confiteor” and “Sanctus,” especially; in “Things Get Broken” less so).

Bernstein’s percussion writing, especially, seems to throw DG’s engineers for a loop. As a rule, it’s over-present: in the first set of tropes, for just one example, the ride cymbal and high hat are annoyingly in the foreground, at one point (“Easy”), almost covering the piano (which is providing the singers their primary accompaniment).

Then there’s the problem of amplification. Take the Second Introit (“In nomine Patris”), where the mens’ voices (mic-ed) overwhelm the boys’ choir, which, as a result, sounds like its singing from a room across the hall with the door closed; ditto for the “Gloria tibi.” The Epistle readings are distant and some of the later tropes (“World Without End,” “I Believe in God”) suffer from the impression that vocalist and orchestra are singing/playing at one another rather than together. The “Agnus Dei” is a textural muddle. One could go on, but by now you probably get the point.

This is a double shame because Mass was the only major Bernstein score DG didn’t have in its discography: this album completes the Yellow Label’s recorded Bernstein catalogue – but what a sad way to wrap it up. Oh well. Alsop (on Naxos) and Lenny himself (on Sony Classical) still tower over this aural train wreck. Stick with them.