Reviews of performances that are energetic, immediate, muscular, and simply breathtaking. 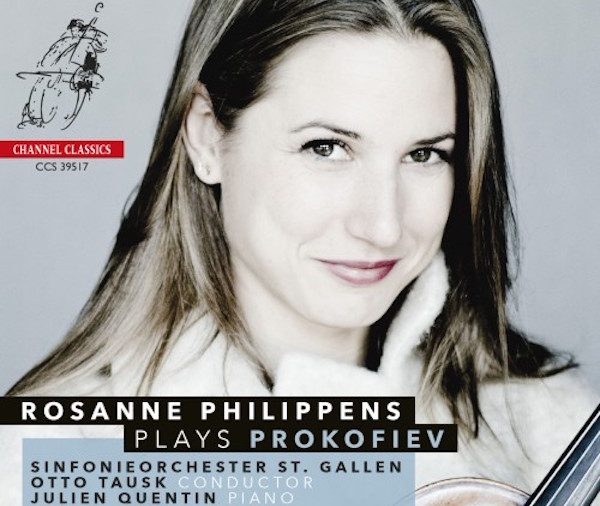 Prokofiev’s Violin Concerto no. 2 really doesn’t need any more advocates. It hasn’t been out of the repertoire since its 1935 premiere and doesn’t appear to be going anywhere anytime soon. That makes violinist Rosanne Philippens’ new recording for Channel Classics (with the Sinfonieorchester St. Gallen (SSG) and Otto Tausk) somewhat redundant. Not that it’s bad, by any stretch: hers is a terrifically energetic account in the outer movements and serenely beautiful in the middle one.

But, especially in the context of the rest of the disc, it’s rather unnecessary. Indeed, the album’s remaining selections – the solo Violin Sonata in D major, the Five Melodies, the “March” from The Love for Three Oranges, and an orchestral arrangement of the slow movement from the Fourth Piano Sonata – are themselves so irresistible as to almost cancel out the familiar concerto.

And that’s actually a good thing. Philippens is a terrific violinist, with a big, muscular tone and a light touch that comes in handy in this repertoire; she’s a persuasive advocate for everything she plays here.

The Sonata is brilliant: full of fire in its outer movements and surprising twists in its inner, lyrical one. Philippens and pianist Julien Quentin make winning work of the Melodies, their sweet tunes phrased with delicacy and the violin’s technical demands – octave double stops in the first movement, artificial harmonics at the end of the fourth, and the like – all executed precisely. It’s a treat, too, to hear the duo’s account of the “March,” with its biting rhythms and snappy pizzicatos.

Indeed, on this album Philippens proves herself a fiddler well worth following: her tone is robust and warm, technical abilities impressive, interpretive sense keen, and the musicality she displays is top-drawer. Maybe the liner notes have it best: Janine Jansen’s blurb calls her “phantastic.” I have no argument with that. 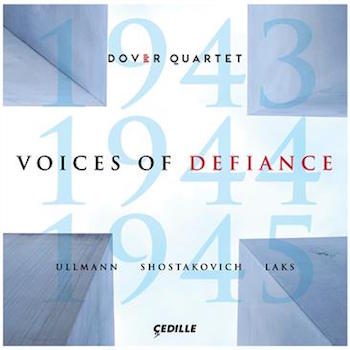 Viktor Ullmann and Szymon Laks never met Dmitri Shostakovich, though the string quartets by all three (written between 1943 and ’45) featured on the Dover Quartet’s new Voices of Defiance album speak with seemingly-related clarity and immediacy.

Ullmann’s Third Quartet, with its tart harmonies and rich chromaticism, opens the Cedille disc. Yes, the music owes a stylistic debt to Schoenberg and Debussy – but none of that seems to matter here. Rather, it’s the score’s warm but bleak lyricism that shines through, whether that be in the substantial Allegro moderato that opens the first movement or in the brief, mysterious finale.

Shostakovich’s String Quartet no. 2 is the album’s familiar selection, while Laks’ String Quartet no. 3 completes the disc. The Laks, written in the aftermath of World War 2, is particularly heartbreaking. It draws on sources that are ancient and modern, ranging from folk songs to train whistles. But everything you hear in it serves profound expressive ends, from the jaunty rhythms of the opening movement to its soulful slow movement and stately finale. This is music borne of suffering, yes; but also the work of a composer who endured unspeakable horrors and its closing bars offer the sense of a kind of sad, steely triumph.

The Dover Quartet’s performances of all three pieces are fantastic: intense, commanding, and filled with color, they are exceptional advocates for this repertoire. Indeed, it’s hard to imagine either the Ullmann or Laks played with greater passion or conviction (not that other quartets shouldn’t try). In a year in which the word “resistance” took on fresh meaning, how excellent is it to have a disc of such insubmissive music played so powerfully. 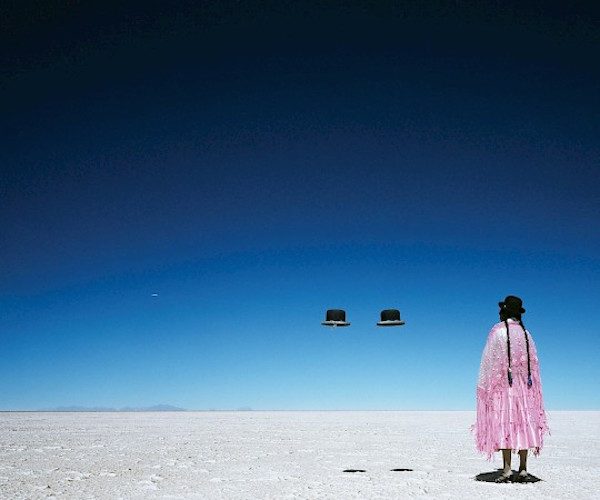 What’s a 21st-century composer to make of the classical piano trio? That seems to be the conceit (at least from reading Nils Vigeland’s introductory note) to the piano trio Longleash’s debut album, Passage. Suffice it to say, you won’t be mistaking any of the trios on this New Focus Recordings disc for the ones by Mendelssohn or Brahms.

Christopher Trapani’s Passing Through, Staying Put evokes physical sensations related to momentum through the use of expressive devices (fast crescendos and decrescendos) as well as technical ones (glissandi, percussive articulations, etc.). It’s creatively done and, in its brevity (only about six minutes long), packs in quite a bit.

In a similar vein, Clara Iannotta’s Il colore dell’ombra draws out the physical qualities of the instruments of the ensemble – the raspy metal of strings that are bowed, plucked, and struck; the grit of horsehair on a bow; the wooden frame of the violin and cello. The concept might be abstract, but Iannotta’s writing offers lots of personality: haunting sonorities in Il colore’s first movement, riotous energy in its second, and ethereal textures in the finale. It’s a piece that always keeps you guessing – but it fully engages the mind and emotions at the same time. No small feat, that.

Likewise sonically inventive but less expressively successful are Yukiko Watanabe’s ver_flies_sen and Juan de Dios Magdalena’s Strange Attractors. Both offer striking gestures: the latter’s study of harmonics draws a particularly fresh array of sounds out of the piano, while the former offers a remarkable exploration of acoustic space. But neither, to these ears at least, really exceeds the sum of its parts, both coming across as too bound to their respective concepts by half. Ditto for Francesco Filidei’s Corde Vuota, a study of resonance that, again, provides ear-catching textures (especially via breathy, string harmonics) but, expressively, says little.

That said, Longleash – made up of violinist Pala Garcia, cellist John Popham, and pianist Renate Rohlfing – performs each score here with visceral intensity and a rich array of tonal colors. It’s tough music, by any measure, but one can hardly imagine stronger performances. 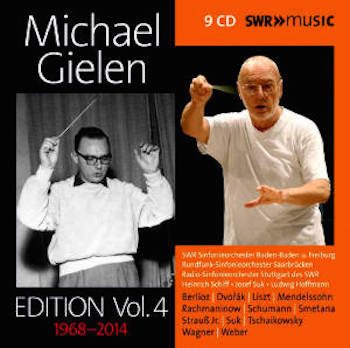 Michael Gielen’s retirement in 2014 robbed the music world of one of the longest-tenured and reliable conductors on the scene this last half-century or so. But he’s by no means forgotten, as SWR Music’s ten-installment Gielen Edition attests. The fourth of ten projected sets, out earlier this year, covers Romantic-era repertoire, some of which (the music and performances) is inspired; some of it, less so.

At the very least, this fourth volume is basically competent. Gielen’s Symphonie fantastique lacks energy and color, especially in the last two movements, but he’s got a strong sense of the melodic line throughout. Similarly, his Tchaikovsky Fourth Symphony flags over the its finale; the first three movements, at least, are nicely weighted and energized. You can find better performances of some of the overtures on the first disc (The Bartered Bride, Roman Carnival), but worse, too; and his Strauss Emperor Waltz is excellent.

In most of the rest of the selections, Gielen’s in fine form. He leads a dynamic reading of Mahler’s orchestration of Schumann’s Symphony no. 1, a stirring account of Tchaikovsky’s Pathetique Symphony, and a fluent performance of Schumann’s Scenes from Goethe’s “Faust.”

There’s some particularly fine Czech fare: an incandescent take on Dvorak’s Violin Concerto (featuring the composer’s grandson, Josef Suk, as the soloist) and an introspective interpretation of the same’s Cello Concerto (with the ever-excellent Heinrich Schiff). And there’s a lively, evocative take on Suk’s other grandfather’s (his namesake’s) epic tone poem, A Summer’s Day.

Gielen’s Wagner, particularly the “Prelude and Liebestod” from Tristan und Isolde, is warm and fervent and he directs a convincing performance of Carl Maria von Weber’s Piano Concerto no. 2 (with soloist Ludwig Hoffmann). And he conducts conspicuously fine accounts of the collection’s more macabre selections: Berlioz’s Requiem (a first release of a live 1979 performance in Stuttgart) and Rachmaninoff’s Isle of the Dead.

In all, then, this volume seems an honest representation of the conductor, whose best moments were many and thrilling. But even when he wasn’t operating at that highest level, he remained a solid, trustworthy interpreter. 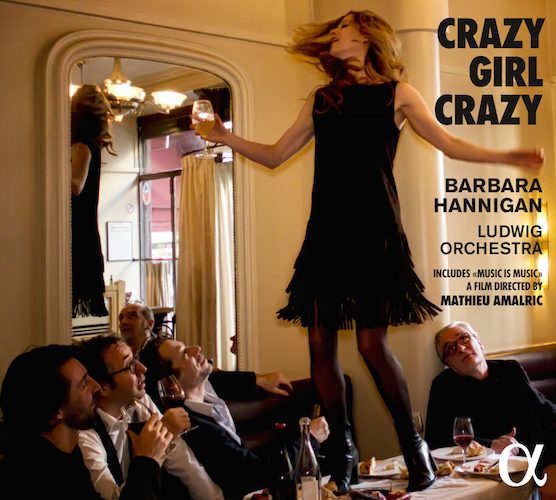 Are there any musical barriers left for Barbara Hannigan to overcome? The soprano/conductor’s Crazy Girl Crazy, a wild survey of pieces by Luciano Berio, Alban Berg, and George Gershwin, suggests that, if so, they don’t stand much of a chance.

She’s already a known quantity for her singing. Here, she gets Berio’s pre-psychedelic Sequenza III to dance, warbling, singing, and laughing her way through its spastic, high-wire vocal acrobatics with an agility that’s simply breathtaking.

What’s just burgeoning is her work as a conductor and this disc marks her recorded debut in that capacity. There is here, unsurprisingly, some room for her to develop: Hannigan’s account of Berg’s Lulu Suite is lush and sumptuous but lacks some of the fearsome immediacy and mystery of Boulez’s and/or Abbado’s. That said, it’s more than just a reading. Hannigan draws splashy colors from the Ludwig Orchestra in the “Ostinato” and concluding “Adagio,” and lends her own instrument, compellingly, to the “Lied der Lulu.”

It’s with her arrangement (compiled with Bill Elliott) of a suite from Gershwin’s Girl Crazy that this album fully comes into its own. The settings of familiar songs – “But Not For Me,” “Strike Up the Band,” “Embraceable You,” “I Got Rhythm” – channel the enigmatic sensuality of Berg with the unpredictability of Berio (check out Hannigan/Elliott’s setting of the latter for more than a few examples of both qualities). On top of that, Hannigan’s a great Gershwin singer, spinning out his tunes with effortless clarity and touching pathos. The Girl Crazy Suite makes for a tremendous closer to a disc that one can imagine Gershwin – who admired Berg, particularly, among his contemporaries – lending his heartiest approval.