You are here: Home / Books / Book Review: “The Seventh Function of Language” — A Deconstructive Whodunit

The Seventh Function of Language by Laurent Binet. Translated from the French by Sam Taylor. Farrar, Straus and Giroux, 359 pages, $27. 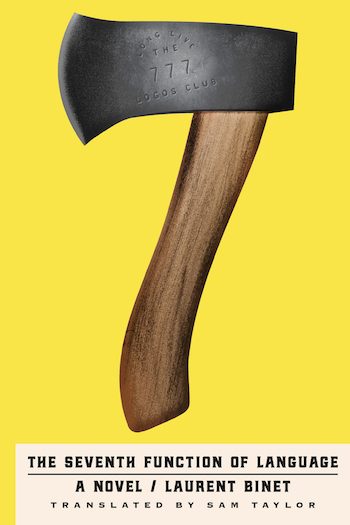 On February 25, 1980, one of the world’s most revered literary critics, Roland Barthes, was struck down in the streets of Paris by a laundry van. He died a month later from his injuries. The mortal accident becomes the catalyst for antic fiction in Laurent Binet’s novel The Seventh Function of Language, a detective yarn set in the harum-scarum social scene of French literary theory, philosophy, and politics. Binet takes us on an ambitious international romp through the lives of familiar intellectual personalities (at least to those in academe), while crafting an engaging, funny, and satiric whodunnit. By asking who killed Barthes and why, Binet shows us there may be life after the death of the author.

Binet is no stranger to manipulating the complexities of the past in his work. His first novel was the well-received HHhH. Its storyline focuses on Operation Anthropoid and the assassination of Nazi official Reinhard Heydrich with Binet’s playful imagination slithering around the boundaries of the historical record. In The Seventh Function, the writer unapologetically toys with the events and personal lives of  highbrow “characters” such as Michel Foucault, Jacques Derrida, Umberto Ecco, Louis Althusser, and Julia Kristeva. His deftly imagined scenarios — informed by an impressive knowledge of the period’s personalities and their ideas — provide an ironic critique of a generation of Gallic intelligentsia.

Ironically, one of our detectives is not a member of the Parisian literati. Jacques Bayard is a no-nonsense superintendent in the Renseignements Généraux and, with so many cogitators to handle, is more than a little hesitant to get involved with the investigation. It is not the fact that France’s most well-known critic has been involved in a traffic accident that sends Bayard to visit Barthes in the hospital, but who the writer was with before the incident. The political backdrop for the narrative is the 1980 presidential campaign between Socialist candidate Francois Mitterand and right-wing incumbent Valery Giscard. It was the first election in the Fifth Republic when a Socialist had a real chance to win. Before Barthes met his untimely end, at least in Binet’s version of the facts, he had lunch with Mitterand. Bayard has been sent by the administration to “establish the circumstances of the accident,” but he is a savvy enough operative to assume he had better dig up some dirt on the Socialist candidate. After seeing Barthes in the hospital, Bayard realizes this will be a more complicated case than he anticipated.

Of course, Bayard is a stranger in a strange land. He needs a guide to the Ivory Tower. After making the rounds at some of the universities, he runs into Foucault, who refuses to help or “be identified by the authorities.” Our shamus ventures to a semiology class at Vincennes, a tuition-free public university that was created in response to the events of ‘68. To Bayard, “Vincennes is a university swarming with work-shy lefties and professional agitators.” Bayard recruits a young post-grad, Simon Herzog — more or less against his will — to assist in translating the language of semiotics into police-speak. In a demonstration of the know-how that can be gleaned through the use of the theoretical foundations of linguistics and semiology, Herzog proves he can intuit a good deal of information about the superintendent. By interpreting the symbolic value of the man’s images and signs, Herzog concludes that Bayard fought in Algeria and is a divorcée. He also sees that he is professional but must be a public servant because of his cheap suit, nurtures a right-wing ideology, and that he prefers Maigret to James Bond.

This game of intellectual one-upmanship provides a good deal of the humor in the novel. Two reluctant detectives with opposing ideologies find themselves working together to unravel an international conspiracy. This conflict dovetails with the red hot academic and professional rivalries that afflict the book’s fictionalized versions of philosophers and critics. This competitive sensibility is exemplified during a trip to a conference at Cornell in Ithaca, New York, where the schools of analytic and continental philosophy are pitted against one another.

True to the genre, the plot is driven by a McGuffin — the titular seventh function of language. Barthes was carrying a document detailing the function’s nature when he was hit by the laundry van, but it has gone missing. Whoever is in possession of the seventh function, a derivation of Roman Jakobson’s functions of language, will be able to wield a tremendously influential persuasive power — hence the interest from  the governmental actors. The conceit will strike some readers as similar to Infinite Jest’s the Entertainment, but the texture of the novel resonates more directly with Wallace’s debut, The Broom of the System, wherein the protagonist makes use of Wittgensteinian linguistic theory to explore the mysteries posed by identity and language.

Perhaps the prime draw of Binet’s narrative is the secret society of rhetoricians and logicians called the Logos Club. The Logos Club meets and hosts duels between ranked members who are given a thorny topic to debate. But this is not Ted Cruz’s debate club. The verbal showdown does not take the form of a mere for-or-against format. There are real, physical consequences to losing, a punishment a few of our characters suffer in not insignificant ways (Phillipe Sollers, writer and husband of Kristeva, mistakenly deploys a falsified version of the seventh function. Castration follows.)

On the one hand, the club is just another meta-fictive outing that we can expect from Binet. But the club also acts as a moralist reminder that our words mean something, that there are consequences to language. There are dimensions of meaning and truth that, while outside of the realm of the empirical, can shape our reality more forcefully than carefully organized sets of facts. Facts are often useless without a narrative that shapes their power, and that notion reflects the spirit of detective fiction. And that leads to an interesting paradox  generated by the novel’s popular form and its recondite subject matter. The conflict between pulp and abstruse literary theory will be illuminating for some, but many will feel just as lost as Bayard is amid the tangled discussions of diachrony and synchrony, différance and the Real. To most readers, this stuff is nonsense.

Ultimately, The Seventh Function of Language will be a book passed around the vulnerable (and dwindling) English and Philosophy departments at our increasingly corporatized colleges and universities. Admirers of this book will be variations on the fans of Monty Python in the ’70s and ’80s; the party of those who think that lampoon is the best way to appreciate the value of a cerebral discipline that our utilitarian, capitalist economy has no use for.