You are here: Home / Books / Book Review: “Our Dead World” — Testaments to the Never Quite Absent

Liliana Colanzi, a promising young writer from Bolivia, delves into her country’s complex histories, indigenous and colonial, in Our Dead World. The stories in this elegantly translated volume proffer a profoundly existential vision — a richly layered and varied darkness. Colanzi grapples with a number of powerful themes: mental illness, tradition and modernity, exploitation, and armageddon. Her tales are deeply rooted in the oral traditions of Bolivia — alluding to its myths, legends, and superstitions — but they are also situated in the socio-political context of contemporary global society. The focus is on life on the margins: racial, ethnic, and linguistic tensions. But Colanzi is not just out to update old legends or to limn Bolivian national consciousness. At their best, her stories offer a seamless blend of folklore, magic realism, and speculative fiction that transcends the limitations of nationality, probing the depths of a universal, painfully human, consciousness.

As befits its title,  Our Dead World is about the ghosts of the past and the unborn future, asking such questions as “how did we get here?” and “where are we going?” These interrogatives often prompt enigmatic and bleak answers. In “Alfredito,” a story about a group of children dealing with the sudden death of their friend, a child asks her grandmother, “where do the dead go?” Her grandmother replies, “the dead never leave.” History, the past, the world of the dead, are continuously part of the present, existing in some liminal space. But such a sentiment negates salvation, too.

Given this perspective, the volume is understandably saturated with a sense of dread, dripping with apocalyptic sentiments. In the title story, a worker on Mars is under intense pressure: she longs to return to Earth, but is forced to accept her fate of dying in the lifeless Martian environment, the “miles of ochre-colored dunes where nothing was alive, a silent desert that breathed down your neck, eager to kill you.” She was selected for the “Martian Lottery” because she lived near a Chernobyl-like nuclear disaster on Earth; exposure to radiation made her suitable for conditions on Mars. When she receives a message her former lover is having a child with another woman, the woman begins to unravel. Her only way to rebel against what she calls “the Great Senselessness of our condition” is to engage in a fruitless, carnal act.

While there is no overt reference to climate change or environmental catastrophes, the circumstances of our inhabiting a dead planet like Mars, together with the nuclear accident, resonates with current ecological concerns. Our colonization of a dead planet (we can’t take care of the one we have) smacks of  imperialism, “the conquest of other worlds.”  “Story with Bird” is the collection’s most direct critique of brutal expansionism. The story is an indictment of the exploitation of the indigenous Ayoreo people, told from multiple perspectives that include first person accounts from an anthropological source. The yarn (and the collection) ends with an ominous ticking clock, possibly counting down to doomsday. The absence of a period at the end of the sentence is a sign of continuation, but just what the future consists of is unclear:

The scope of the stories in Our Dead World moves with ease into a fusion of the phantasmagorical and the psychological. “Meteorite” centers on Ruddy, a farmer. He becomes fearful of an exploited, underaged worker who claims to “speak with space people” and warns that they are coming. An accident on the farm, caused by Ruddy, nearly kills the boy. At the same time, Ruddy happens to see a meteorite fall from the sky. “The meteoroid,” Colanzi writes, “traced the same orbit in the solar system for fifteen million years until the movement of a comet pushed it toward Earth.” The coincidence of the meteorite (which could contain ‘space people’ for all Ruddy knows) and the accident seems to case a spell on the man, who develops an irrational fear of the unknown. 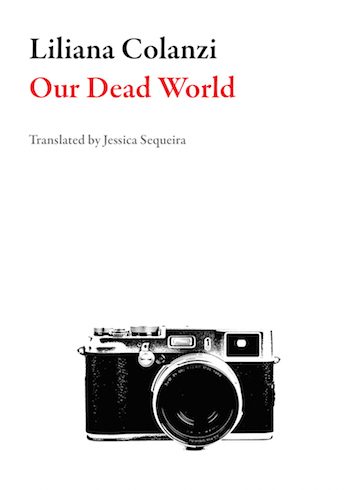 In the surreal “The Wave” a young woman returns to Bolivia from America when she learns that her father is dying. She is also fleeing “the wave,” a physical manifestation of (her?) psychosis as well of a fate manifested through suicides on campus. This death instinct has followed her family forever. A cab driver tells her about a woman he met on the road who was seeking healing in the desert. After eating the flesh of a cactus in order to stay alive, she is given a revelation about interstellar and cosmic beings. She finds an eerie peace once she learns about the imminent destruction of the Earth.

Colanzi delivers some risky, but important, messages in these enigmatic stories. She is trying to tell us something indispensable about who we are as a species — and to probe our complicated (and increasingly troubled) relationship to the earth’s environment and to each other. She believes that there are valuable lessons to be found in myths and the nooks and crannies of history, in what happens in the remotest of places. Ironically, the people who live in those marginal places are often at the greatest risk of imminent destruction, at the forefront of fragility. The collection’s title comes from an Ayoreo song: “This is the trunk of all stories, it tells about our dead world.” If the dead never move on, as “Alfredito” would have it, then there is no other world than a world that teems with extinction, vulnerable life surrounded by the never quite absent.