Singer Valerie June lays down an impressive vocal marker with her new album; her distinctive flexibility is not anchored to any one genre.

At her Boston debut last year, Americana singer, songwriter, and multi-instrumentalist Valerie June mentioned how she was raised in rural Tennessee but now lives in the bustling borough of Brooklyn, NY.

There wasn’t much need for the background info; these competing influences are abundantly clear in her music, and her songs generally benefit from the synthesis. Plucky melodies pulled from a banjo collided with shimmering R&B vocals. Down home met uptown, and June somehow made all the contradictions make sense. And she pulled this off in the never-enviable role of having to open a concert for a highly anticipated headliner; in that case, June was warming up early arrivals to Sturgill Simpson’s concert at the Orpheum last October.

June returns here on Tuesday (February 7), now headlining a show of her own at the Wilbur Theater. And, unlike her Orpheum appearance, when it was simply her and a bassist, June arrives with a full band in tow, so she can more fully perform (and explore) the material on her forthcoming record, The Order of Time.

Whereas June’s previous effort, Pushin’ Against a Stone, showed the many directions she was able to take as a singer and a writer, The Order of Time seems more interested in blending alternatives: genres are broken apart, their constituent parts reassembled into tunes that reflect June’s nimbly eclectic musicality.

Reached by phone just after returning from a short tour of Europe, June said she thinks that working with one producer, Matt Marinelli, in the quiet setting of Guilford, Vermont, contributed to the new album’s cohesiveness. So it was somewhat surprising when June told me that, despite the impression of the LP’s unity, the songs on The Order of Time were not written or arranged at roughly the same time.

“Some of these songs are over 10 years old. Some came to me way before they were ready to record,” she explained. “Leonard Cohen is one of my favorite songwriters, and he said that it can take years to write a great song.”

June had about 100 pieces of music to share with Marinelli before they started making her latest recording. The process began when she drew up a list of songs she wanted on the album, and then Marinelli did the same.

“We put our lists side by side, and a lot of the songs were the same,” she recalled. I didn’t come into it with a theme in mind, just songs. I had to figure out what was common. And, as I thought about it, I realized it’s all about time.”

Impatient as a child, June confessed she had to learn to respect the power of time. She illustrates her point with a story about the cello. A decade ago she came up with a song that called for a lovely cello line as part of the arrangement. But she had to wait before she felt she had the maturity to bring that cello into her sound.

June started performing in Memphis around 2000, when she was 19 years old. In 2009, MTV featured her in a series about young artists trying to get by on their music. That exposure helped June self-release three albums before she moved to Brooklyn and met Dan Auerbach of the Black Keys. Auerbach and June collaborated on Pushin’ Against a Stone, which was released on Concord Records to across-the-board critical acclaim in 2013.

June has a suitably elastic voice for her mix-and-match sensibility. She’s a powerful singer, though not in the Adele sort of way. Instead, Here voice is a beguiling mix of warmth and coarseness, perfect for bridging the rustic and polished styles she employs.

June lays down an impressive vocal marker on The Order of Time, her distinctive flexibility that isn’t anchored to any one genre. And she acknowledges that she couldn’t have accomplished what she has alone: “Every day we plant seeds, and we have to wait to see how they grow. I’m benefiting from seeds that my parents, grandparents and other artists planted. At a certain point it’s not about just you but about all the people who planted the seeds that grew into something for you.” 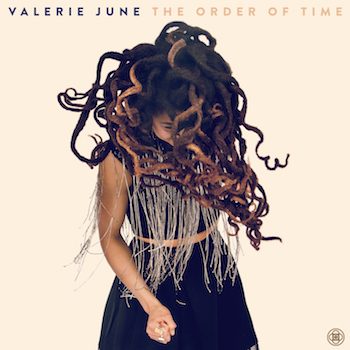 The Order of Time is filled with the sounds of an artist coming into her own. Valerie June’s second album for Concord Records (to be released on March 10) expresses the artist’s admirably adventurous spirit.

Since emerging over the past few years via a handful of self-produced records, and participating on such interesting roots-music projects as the Luther Dickinson-led The Wandering, June has proven her versatility as a vocalist. She is as good tapping into the ache of an R&B ballad as she is conveying the primitive wisdom of a stony blues tune. The Order of Time shows just how well her songs can blend those (at times) conflicting styles.

Whenever an artist experiments, there’s always a chance that the risk-taking will leave listeners behind. Wherever June wanders, however, she never loses sight of her audience. You could not call The Order of Time an unalloyed pop album, but it respects pop appeal even as it delicately layers on folk, blues, and soul influences.

June’s voice — nuanced but mercurial — is her paradoxical signature. Whether she is cooing the hushed tones of “Love You Once Made” or unleashing plenty of good old fury on the hard-rocking “Shake Down,” she combines passionate conviction with raw skill. The confidence that underlies her ambidextrous vision makes it possible for her to agilely pass through the meditative (“If And”), the swampy (“Man Done Wrong”), and the soulful (“Slip Slide on By”) without ever suggesting that she is becoming lost or adrift.

The record’s musical centerpiece is “Astral Plane,” a starkly arranged pop hymn that shimmers and gleams with an unabashed hopefulness – not a bad message at a time when American madness seems to be rocketing off into new dimensions.