Marc-André Hamelin, one of the world’s elite pianists, held the packed Shalin Liu Performance Center enthralled as seagulls wheeled across the sky and the music soared throughout the hall.

Celebrating its fifth year in existence, the magnificent Shalin Liu Performance Center in Rockport has welcomed hundreds of world-class artists to its stage. But it would not be all that difficult to imagine that when the venue was in its earliest planning stages,its designers might well have had in mind an image from this past Saturday night: An early summer evening, the sky and ocean of Rockport Harbor darkening behind the signature glass wall that frames the stage while, at the Steinway, Marc-André Hamelin performs Debussy’s Images, Book II. Hamelin, one of the world’s elite pianists, his fingers blistering across the keyboard, holds the packed house enthralled as seagulls wheel across the sky and the music soars throughout the hall.

The Montreal-born Hamelin, making his third visit to the Shalin Liu (courtesy of Rockport Music), is that rare breed of composer/performer whose virtuosity allows him to offer a wide-ranging repertoire of both traditional and eclectic music, and he put that compelling mix on impressive display on Saturday.

Noted for his engaging programs, Hamelin didn’t disappoint in Rockport. With his penchant for lesser-known composers, especially those from the 19th century, Hamelin opened with a lilting Andante Inedit, written in 1836 by John Field. He followed that with his own composition, Pavane Variee, written in 2014, a playful knuckle-breaker infused with a sense of jazz that raised the temperature several degrees. What sets Hamelin apart as a composer is that he is not risk-averse, but he doesn’t stray so far into dissonance and minor keys that he loses his audience.

His fingers flying over the keyboard, Hamelin is the master of a remarkable touch. There’s always a dexterous beauty present, either when he suggests the sounds of a lover’s soft caress or when he pounds out cannon shots on the keys. His repertoire is replete with the greats, Liszt, Chopin, and Debussy, as well as the obscure, Leo Ornstein and Nikolai Roslavets. When he plays, he does so with the care that at least someone in the audience has never heard the piece before — it is up to him to give it an effective introduction.

And Hamelin comes to play. He utters barely a word between pieces, yet this master craftsman still manages to communicate directly with his audience. As he launched into the magical Debussy composition, Images, Book II, you could hear a pin drop. With the light fading behind him, Hamelin was nothing short of mesmerizing. He finished the first half of the performance with another original composition, Variations on a Theme of Paganini, a rousing, humorous stew of playful, contrasting, quilt-like pieces sewn together to great effect. 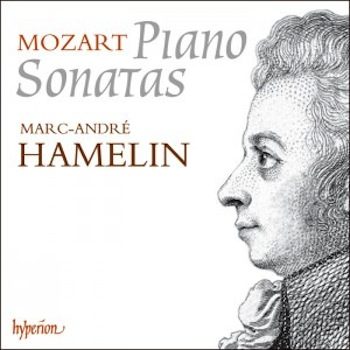 At 53, Hamelin, who resides in Waltham, has performed all over the world and he is spending his summer on stages at various festivals from London to Aspen. He will play with various orchestras later this year at the Royal Albert Hall, Carnegie Hall, and the Kennedy Center. He will also make his debut performance at Teatro alla Scala with the La Scala Orchestra. A prolific and popular artist for the Hyperion Record label, Hamelin’s latest offering is a two-disc set of Mozart Sonatas, a powerful addition to the more than 50 recordings in his discography.

When he came back for the second half of his concert at the Shalin Liu, Hamelin offered a particularly beautiful rendition of the Four Impromptus by Schubert. Head down, eyes closed, fingers moving with a sensitive grace, Hamelin’s deep affection for his instrument and for the music was evident. It would be difficult to imagine this piece played more beautifully and movingly. The audience stood and cheered its approval when he was done.

His encore, Debussy’s “Reflets dans l’eau,” followed by “Liza,” a Gershwin piece arranged by Earl Wild, was a perfect coda to the evening. In a world so often mired in sounds of darkness and despair, an evening immersed in Hamelin’s magical performance was a welcome and rejuvenating respite.