You are here: Home / Books / Fuse Book Review: “The Silkworm” — The Beasts Arrive in a Lather

In this whodunit by Robert Galbraith — the pen name of J.K. Rowling, better known for her Harry Potter books — editors, literary agents and writers play the part of monsters on the loose. 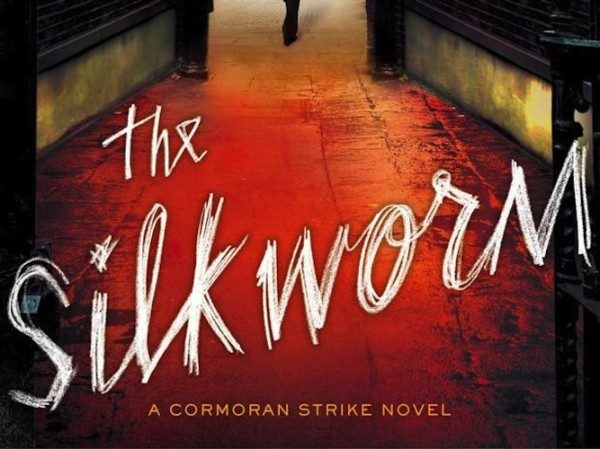 Robert Galbraith, author of The Silkworm (A Cormoran Strike Novel, Mulholland Books, 464 pages), leaves little doubt that English is his first language. He gets a lot out of it without its gears clashing or it arriving in a froth. Between Galbraith and English prose there is a relaxed, almost pre-natal sort of rapport.

Consider how much you painlessly absorb about The Silkworm‘s three main characters — Strike, a London private eye, Robin, his smart, almost too comely assistant, and Matthew, her fiancé — from the following sentence:

The little snatches of information that Robin brought home — Strike’s career in the Special Investigation Branch, the plain-clothes wing of the Royal Military Police, his decoration for bravery, the loss of his lower right leg, the expertise in a hundred areas of which Matthew — so used to being expert in her eyes — knew little or nothing — had not (as she had innocently hoped) built a bridge between the two men, but had somehow reinforced the wall between them.

No, it’s not a run-on, only smooth and flowing to the point where, I, for one, would not have complained if Galbraith had chosen to keep it flowing further. But Galbraith isn’t about pushing English syntax to its limits. There’s nothing neo-late-Henry James about this writer. Galbraith makes his fluent prose heel before the all-powerful demands of the whodunit — macabre, grotesque, gothic and rife with quotes from Jacobean drama, as it may be.

I can’t resist noting this author’s way with adjectives, as in this summation of Strike’s ex-lover, the, “beautiful, clever, volatile and damaged” — or, in plain American, hot and all fucked up — Charlotte, born to the English peerage but longing for better sex.

The surface of The Silkworm is cozy, English as those good sentences are, full of tea, familiarity, and innuendo. Sure, there are rifts and tiffs and fits and people say terrible things to each other. The weather is as nasty used to be a given in English novels. (When did that change?) It snows and sleets and there’s never anything decent to say about it. The food, the food is only palatable when it’s curry.

The real terrors are brewing out of sight. They involve — no, no, don’t make me say it — trussing up a writer and disemboweling him just as he had described happening to one of the characters in his last novel.

It’s a vampire novel minus actual vampires. Evil bloodsucking editors and agents fill in very well as monsters on the loose.

Enough of that. Time to come clean:

Robert Galbraith is the pseudonym J.K. Rowling chose for her post-Harry Potter books.

It may put me at a disadvantage not to have read the Harry Potter books. My daughter was too old for me to read them to her. By the time they came out she was reading all of Tolkien, which I had read to her, every word, on her own. But I suspect that had I read Harry Potter I would discern continuities between those books and The Silkworm — the coziness, the small circle of friends, the gothic mayhem contradicting surface calm. Plus, no doubt, the author’s innate facility with English prose.

The Silkworm satisfied me sufficiently until the end, the wrap-up, when, however implausibly, you find out who it was that really did what to whom. The higher math of the conclusion seemed far too post-Euclidean. Here the Galbraith/Rowling gears do grind. The beast arrives in a lather.

I wonder if Rowling can write any other kind of book than this, if the pleasures of her sentences depend on ultimate obedience to archaic truisms of plot.

Let it be said that wrap-ups are not only a problem for Rowling/ Galbraith books. Wrap-ups are the bane of the contemporary whodunit. Next time I’ll tell you why I dodge Lee Childs’ Jack Reacher novels and why the fabled Jo Nesbitt books, featuring Harry Hole, strike me as been-there-done-it tales, redeemed only by their humor.