The complete Hill Street Blues is not only a godsend for students of television, but for those eager to venture beyond the predictable clinical redundancies of the Law and Order and CSI dynasties.

“Let’s be careful out there.” There five words kicked off each episode of Stephen Bochco and Michael Kozol’s ground-breaking police series Hill Street Blues. Over seven seasons, from 1981 to 1987, the show challenged conventional perception of what network television could achieve. Combining documentary aesthetics, hand-held cameras, overlapping dialogue, and complex narratives that were not tied up neatly at the end of each episode, Hill Street helped create what we now know as “Quality Television.” For the first time, the complete series is now available on DVD, courtesy of Shout! Factory. This should be a cause for considerable rejoicing: not only for students of television, but anyone anxious to venture beyond the predictable clinical redundancies of the Law and Order and CSI dynasties.

Yes, the roll-call warning of “Let’s be careful out there,” was apt given that the men and women charged with protecting the fictional streets of the Hill District dealt with the expected dangers of life as an urban police officer. But it was the show’s probing of internal issues that set Hill Street Blues apart from all the cop shows that came before it, and that influenced all the law enforcement programs that came after. Alcoholism, depression, racism, rage, divorce, adultery, suicide — none of these issues was untouchable or taboo. Thus the show broke ground weekly. In Hill Street Blues, the cops were not the lofty, heroic characters we’d seen before, keeping the peace with a smile on their faces and a twirl of their batons. Here, the officers struggled to complete their at times impossible tasks. Peace was met with chaos, morality challenged by red tape realities, quests for justice scuttled by prejudice. What made Hill Street Blues great was that its cops were beset by internal and external demons.

One of the finest examples of the show’s ability to deftly handle controversial subject matter is Season Three’s installment, “Trial by Fury.” Written by David Milch — his brazen entry into television won both an Emmy and a Humanitas award — the episode is a grim morality tale. In the show’s opening moments, the detectives of Hill Street station investigate the rape and violent assault of a nun. Captain Frank Furillo, faced with a less-than-perfect case against the two assailants in custody, takes a gamble and drops the charges in an open courtroom, with an angry mob outside the doors waiting to take matters into its own hands. Faced with the civilian justice, the men capitulate and confess. The law has worked, but it has been bent to the breaking point. Murderers and rapists receive their just punishment but, tellingly, the episode ends with Furillo entering a confessional. “Forgive me father, for I have sinned,” he says, as the credits roll. It is a reminder that the law is not always clean cut and pretty. 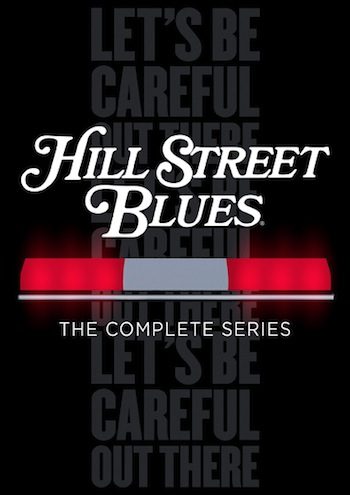 That is part of Hill Street Blues‘ enduring artistic power and impact: the show habitually explores the often bittersweet or ironic stalemate between the law and reality. Sure, some of these ambiguities have become worn out tropes to viewers after 30 years — the lovable undercover cop who sweet talks to his mother but growls and bites the ankles of criminals, the right-wing lieutenant who spouts racist ideology in order to excuse justice by force, and the morally torn captain, who must somehow keep it all together. But by complicating these generic constructs, Bochco and company created television excellence, generating gritty stories about human beings who simply did the best they could to keep the streets safe. And so the best of the show holds up while the worst of the show remains problematic. The cause of the latter is partly due to the nebulous location for the show’s precinct, which is never named. The Detroit/Pittsburgh/New York amalgamation is imbalanced, particularly in its depiction of criminals of color.

If the influence of Hill Street can be seen in anything, perhaps we need to look no further than the future projects of its creators and crew. Before the show ended, co-creator Bochco had already moved to L.A. Law, where he would examine some of the same issues in the courtroom. The greater achievement, though, can be seen in Bochco and David Milch’s collaboration a decade later — NYPD Blue. Blue dives even deeper into the darker side of the law by focusing on the career of a racist, angry, alcoholic detective. The program didn’t just tackle the issues seen on Hill Street, it violently wrestled with them. Milch furthered his own exploration of law, morality, and social inequalities in his own show (Deadwood) two decades after he joined Hill Street Blues as a writer. A fascinating note: both the first episode Milch wrote for Hill Street, “Trial by Fury,” and the pilot of Deadwood revolve protagonists who must take the law into their own hands in the face of a lynch mob. Some interests just never go away.

Included in this new DVD set are a few special features repeated from the earlier releases of Seasons One and Two. Bochco presents an adequate back-story of the show, making sure that kudos are given to those who earned them. The cast looks back fondly at a program that one of them claims would not be welcome on broadcast television today. But the extras are not what are important here, although additional commentaries or a more in-depth look at the show would be welcome. In this age of TV delivered to us on our tablets and computer screens, you may be asking yourself why it would be worth it to invest in a box set like this. The simple answer is that Hill Street Blues deserves to be discovered by a new audience. Amazingly, the show still feels chaotic and vibrant enough to reach younger viewers as well as remind those who watched it the first time around that they were watching cultural history being made.