This past month, we were graced with the momentous returns of two of post-rock’s most evocative acts: Montreal quintet Thee Silver Mt. Zion Memorial Orchestra and Connecticut duo Have a Nice Life. The former, an offshoot of the eminent Godspeed You! Black Emperor, is something of a titan in the genre; whereas the latter has made a name for itself in the underground thanks to its ambitious 2008 debut, the double album Deathconsciousness. But both have just come back after four and six years, respectively, with LPs that are exceptionally poignant and push the genre forward.

Thee Silver Mt. Zion Memorial Orchestra – Fuck Off Get Free We Pour Light On Everything

As its title might suggest, Fuck Off Get Free We Pour Light On Everything is a colorful-sounding album – its tracks are post-rock infused with elements of art rock, psychedelic music, and punk. The band worked with this combination of styles on its previous album Kollaps Tradixionales; however, the multi-facted sound works even better on this new record because, for one thing, Thee Silver Mt. Zion has refined it over the last four years, but more importantly, it is a perfect fit for Fuck Off’s weighty themes of end times and early graves.

A flood of distorted guitars and violins greets you in the 10-minute-long opener “Fuck Off Get Free (For the Island of Montreal).” This song also has an incredibly powerful, driving drum part, as does just about every track on the disc. It’s the strongest composition the band has created using its more aggressive sound, and the song is a strangely appropriate backdrop for the album’s lyrical treatment of such topics as the mundanity of life and the inevitability of death. Some people don’t care for Efrim Menuck’s voice, finding it to be too whiny, but I find it charming. His singing is better than ever on Fuck Off, not only because he continues to improve on a technical level, but also because he’s called on to be at his most emotional and evocative.

Menuck’s sober inflection on the verses of “Austerity Blues” is pitch-perfect. His rendition of the line “Lord let my son live long enough to see that mountain torn down” during the song’s soaring midsection is heart-stopping. He lets his wilder side out for “Take Away These Early Grave Blues,” an explosive track that exemplifies the band’s punk ethos. Still, while these chaotic, climatic moments in Thee Silver Mt. Zion Memorial Orchestra’s music are glorious, the comedowns are just as powerful, particularly the weary vocals and strings at the end of “Fuck Off Get Free,” as well as towards the back end of “Austerity Blues.” Following “Early Grave Blues,” we even get a beautiful, two-minute-long piano piece with Jessica Moss and Sophie Trudeau doing the lead vocals for a change.

“What We Loved Was Not Enough” is the slowest-moving of the LP’s massive tracks. Compositionally it is just as substantial as the others and packs in a couple of climaxes, but its a thoroughly tender track. It also proffers Fuck Off’s most affecting lyrics: “There’ll be war in our cities/And riots at the mall/Blood on our doorsteps/And panics at the ball/All our cities gonna burn/All our bridges gonna snap/All our pennies gonna rot/Lightning roll across our tracks,” followed by a refrain of “All our children gonna die.” In addition, the song fades out with the haunting group vocal “The day has come when we no longer feel.” This gives way to the plodding album closer “Rains Thru the Roof at Thee Grande Ballroom,” whose subtitle is dedicated to Capital STEEZ, a member of hip hop collective Pro Era, who committed suicide at the age of 19 on Christmas Eve in 2012. It’s somewhat reminiscent of Yoshimi-era Flaming Lips, and like its subject matter, ends too soon..

Have a Nice Life – The Unnatural World 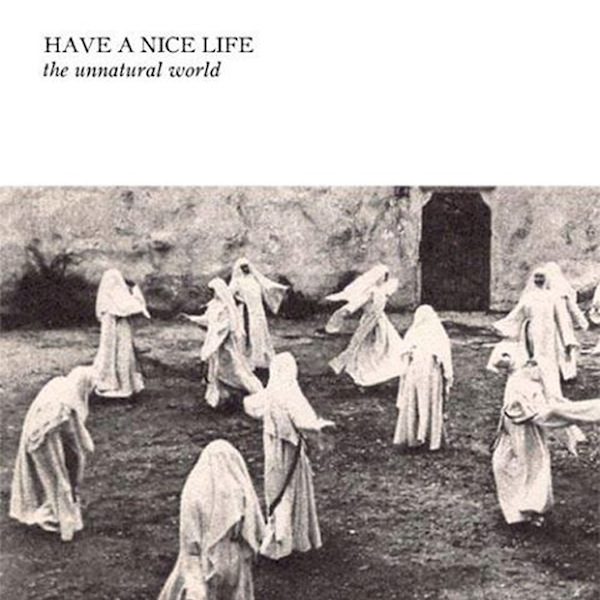 The Unnatural World is a bleak album – not exactly shocking news about the same band that brought you Deathconsciousness. However, while at times this new LP comes off as tortured as its predecessor, the music this time around is a different animal entirely. Over the course of the last six years, the members of Have a Nice Life — Dan Barrett and Tim Macuga — have been involved in a number of pretty impressive side projects. Working in the contexts of Nahvalr and Giles Corey has most likely helped mature the sound and sensibility of Have a Nice Life. Sadly, the tongue-in-cheek song titles of Deathconsciousness are all but gone, but The Unnatural World is worth rejoicing over all the same, because it contains some of Dan and Tim’s greatest tunes yet. Overall, it is their most digestible project to date.

The Unnatural World is another genre-defying project from the duo – a Frankenstein monster of post-rock, shoegaze, industrial, black and doom metal, drone, and post-punk. Nearly 40 minutes shorter than its predecessor, the album gives us Dan and Tim stitching all these styles together in remarkably efficient ways. Despite its just breaching the five minute mark, opener “Guggenheim Wax Museum” manages to integrate an ambient intro and coda, lurching industrial beat, reverb and distortion-drenched guitars, markedly detached vocals, and a crashing post-rock climax. All of these ingredients are blurred together in the record’s deliberately cloudy mix and quasi-lo-fi recording. It’s a dazzler of an intro, and the track glides nicely into the anthemic “Defenestration Song.” Despite The Unnatural World‘s generally murky mix, Dan and Tim still make sure songs like the latter make the crisp, booming, and depressive impact they ought to.

“Burial Society” offers a dramatic build, its incredibly passionate vocal climaxing about halfway through the song. Some off-kilter falsetto “oohing” emerges as the song cools down, but unlike an act like Thee Silver Mt. Zion, Have a Nice Life’s build-ups generally pack a much greater punch than its come-downs. The track “Music Will Untune the Sky” is an atmospheric interlude stuffed with spacey electronics, heavy guitar tones, soaring vocals, twinkling bells, and what sounds like weeping bowed strings. It’s perhaps the only track on the album that could be described as “blissful.” The chanted vocals actually sound transcendent.

However, The Unnatural World’s highlight has to be “Cropsey,” Dan and Tim’s most carefully-crafted piece to date. The tone is set with a two-minute snippet of an interview with a child in Pennhurst Asylum – undoubtedly the LP’s saddest moment. But eventually thudding drums and burning vocals rush in. The guitar playing on this track is awe-inspiring in and of itself: it features two volumes — loud and louder. The LP’s most moving point comes when the instrumentation swells at the refrain “I’ve been waiting on everyone.” The song more than earns its brief ambient coda.

“Unholy Light,” on the other hand, is a bit too straightforward and short-of-breath for its own good. It’s an indie rock song, performed with a bit more bite than what your average indie act would provide. Still, its noisy finish is pretty nice. Thankfully, the music becomes more interesting on the single “Dan and Tim, Reunited by Fate,” which also marks the welcome return of the duo’s knack for coming up with amusing song titles. The first half of the song is a gloomy dirge performed via whirring guitar, industrial electronics, and yet more distant vocals. The instrumentation becomes so loud and crushing that it’s hard to discern whether you’re hearing guitar or synth. The song has a protracted coda that is driven by buzzing electronics.

As on “Cropsey,” Dan and Tim take their time building up the final track, “Emptiness Will Eat the Witch.” At nearly nine minutes, it is the record’s longest track, although it is by no means its most dynamic. The tune is a drone piece through and through; the guitars are clean and understated for once and the vocals are pushed so far back in the mix that they are nearly inaudible. However, the tune is very poignant, given its forlorn arrangement. The duo’s rising voices toward the end of the song put a lump in your throat. Then the voices and instruments are withdrawn, leaving a few somber guitar chords. And they, too, abruptly fade away.