The Boston Modern Orchestra Project is in the habit of making convincing arguments for just about everything it plays and its performers do so again in these three CD releases featuring music by composers with a New England connection. 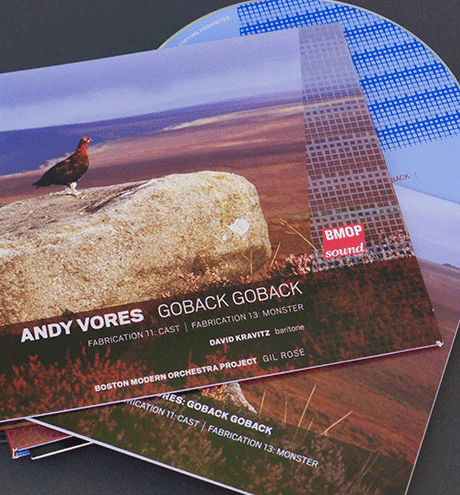 One of the nice side benefits of BMOP/Sound’s growing catalogue is how it brings to light the music of important local composers. One of them, Andy Vores, is the focus of a glowing new album that centers on his song cycle, Goback Goback, a setting of poetry by W. S. Graham.

Vores is chair of the composition department at the Boston Conservatory and a familiar presence on the programs of many local ensembles, including Boston Musica Viva, the New England Philharmonic, and Guerrilla Opera, in addition to the Boston Modern Orchestra Project. He’s a prolific and eclectic composer who’s not afraid of taking risks, as this album capably demonstrates. (In the interest of full disclosure, I’ve known Andy for nearly a decade now: he was my advisor while I worked on my Master’s degree at the Conservatory. Though I never took a class with him, I came to know his music fairly well as a student and, appropriately, it actually figured on the first program I ever heard at Jordan Hall – a BMOP concert in the fall of 2004.)

Written at a personal crossroads for Vores, Goback Goback falls into three basic sections: the first three poems focus on memories of childhood; the second three on various, kind of ethereal experiences in the present; and the last two deal with loss. It’s a haunting score, by any measure, with a finale (“Loch Thom”) that channels the depth of Mahler’s Das Lied von der Erde. Before that come seven movements featuring a bewildering array of stylistic references, all of which profoundly enhance Graham’s distinctive verse: there’re the bubbling Minimalist patterns of “From the Greenock Dialogues” that give way to scalar flights punctuated by rich chordal pauses; the disquieted lyricism of “Imagine a Forest,” the ground of which suddenly sinks without warning; and the ebullient weightlessness of “Enter a Cloud,” which also features a surprisingly catchy refrain.

Baritone David Kravitz, who premiered the piece with Collage New Music in 2003, sings the daylights out of it here, fully inhabiting Goback’s kaleidoscopic moods and characters. And Gil Rose draws playing of great color from a reduced BMOP contingent.

Filling out the disc are two of Vores’ wildly contrasting Fabrications, both written in 2008. The first, a post-Ligeti/Xenakis essay in textural composition subtitled “Cast,” draws its inspiration from Robert Serra’s sculpture, Torqued Torus Inversion, while the second, “Monster,” takes Carol Churchill’s play Blue Kettle as its basis. Both receive readings that bristle with confident energy and – in the case of the latter – not a little bit of dark humor. 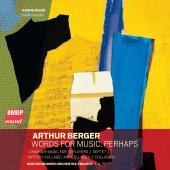 One of the longest-lived composers on the local scene was Arthur Berger, who taught at Brandeis and New England Conservatory for over fifty years. This year marks the tenth anniversary of his death at age ninety-one, and BMOP commemorates that milestone (or Berger’s 101st birthday – take your pick) with Words for Music, Perhaps, a handsome new album of five of Berger’s scores for mixed chamber ensembles composed between 1940 and 1992.

The most immediately accessible piece in the collection is the first, the eponymous Words for Music, Perhaps, a set of three songs on poems by William Butler Yeats for voice (here, the excellent mezzo-soprano Krista River) and an ensemble of flute, clarinet, and cello. It’s music of sweeping lyricism in a kind of Populist vein, but one with an edge that guarantees it never goes quite where you expect.

Berger’s Chamber Music for 13 Players (1956) and Septet (1966) feature much more of that edgy spirit, now channeled through an atonal harmonic vocabulary. It’s deeply engaging music, though – not for nothing did Milton Babbitt call Berger a “diatonic Webern” – articulate in its content and iridescent in its instrumentation.

The two later scores that close the album, Diptych: Collage I and Collage II (1990) and Collage III (1992) marry the freely lyrical character of Words for Music, Perhaps with the spastic energy and astringent harmonies of the middle two pieces. Each are based on previous chamber pieces of Berger’s and, though it may help to know the earlier works, the three Collages stand firmly on their own, expressively.

Again, all receive glowing, confident performances in the hands of Rose and BMOP. For my tastes, the two best pieces are the Yeats settings and the Chamber Music for 13 Players – the former sung and played with shrewd intelligence, and the latter with burbling energy – but you’re going to be hard-pressed to find better recordings of any of these five anywhere else.

Matthew Rosenblum hails from Pittsburgh, where he is chair of the music department at the University and heavily involved in that city’s new music scene (not to worry: he has a local connection, having earned a degree from New England Conservatory). The album, Möbius Loop, features three of his pieces written between 2000 and 2012: the title track(s) – the first a version for saxophone quartet, the second for quartet and orchestra – a Double Concerto for baritone saxophone and percussion, and the orchestral piece Sharpshooter. 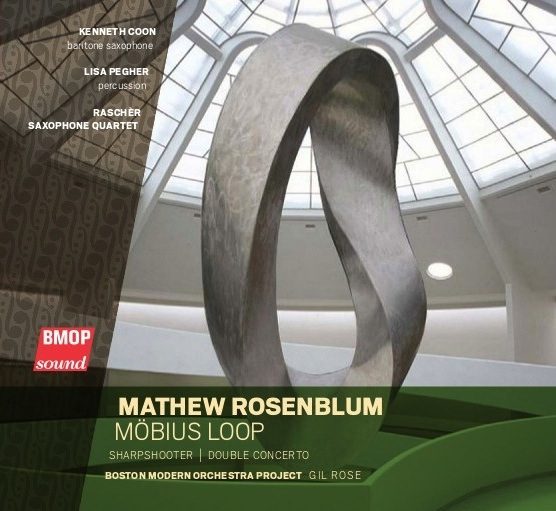 Perhaps the most distinctive feature of Rosenblum’s music is his use of scales. Rather than limit himself to the twelve notes of the chromatic scale, Rosenblum developed a 21-pitch division of the octave and much of the music on this album adheres to some arrangement of that unique scale.

It’s distinctive sound is unmissable in Sharpshooter, a gritty curtain raiser that runs like a mad gamelan for it’s seven-minute duration.

The gamelan-esque sound is even more present in Rosenblum’s Double Concerto for saxophone, percussion, and orchestra. It’s a difficult piece to pigeonhole, running a wide stylistic gamut and featuring an instrumental pairing for which similar pieces are few and very far between. But the writing for saxophone (played here with cool confidence by Kenneth Coon) is brilliantly virtuosic and the percussion equally colorful: it’s a piece that easily draws the ear and takes it on a journey both strange and familiar.

The heart of the album, though, is dedicated to the Möbius Loop. Rosenblum wrote the piece at the end of his mother’s life and there’s a gravitas to the music that might be read as a meditation on death. But it’s not all grim: Möbius Loop also draws on an improvised tune by the composer’s seven-year old daughter and its appearance provides one of the piece’s most striking moments. I came away more impressed by the immediacy of the quartet version, though the brilliant colors of the expanded orchestral setting have a power of their own; it’s telling to have both on one disc, as the affect each gives off is quite different, one version to the next.

In all these performances, Rose again draws bold performances from BMOP. This is an orchestra that’s in the habit of making convincing arguments for just about everything it plays and they do so again here.

The original incarnation of Möbius Loop features the Raschèr Saxophone Quartet, for whom the piece was written. The group has all the music’s quirks and gestures easily in hand, and navigate Rosenblum’s swirling eddies of notes with surety and sensitivity.