You are here: Home / Featured / Film Review: The Stone Roses Bloom Again — “Made Of Stone”

This is a movie that one Stone Roses fan made for other Stone Roses fans to enjoy. There’s nothing wrong with that though, and judged in this way, it’s a winner.

The Stone Roses: Made of Stone, at The Brattle Theatre, Cambridge, MA, on November 6 at 8 p.m. 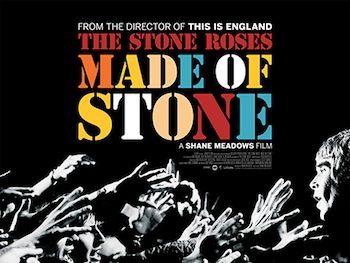 Some rock documentaries have such broad appeal that they are of interest even to people who don’t usually care about the genre. Classics like Gimme Shelter or Dont Look Back come to mind, as do the more recently released Standing in the Shadows of Motown and Searching for Sugar Man.

The Stone Roses: Made of Stone is not one of these films. Instead, it comes off as nothing more (or less) than a movie that one Stone Roses fan made for other Stone Roses fans to enjoy. There’s nothing wrong with that though, and judged in this way, it’s a winner.

The main reason Made of Stone works as well as it does is that the fan who directed it is Shane Meadows, the British director best known for the widely regarded 2006 film This is England. In Made of Stone, Meadows couples the passion of a true believer with the expertise of a gifted filmmaker, and he almost always strikes the right balance between the two. While he positions himself as a character in the action, he wisely doesn’t make himself the focal point and this keeps Made of Stone from becoming a film about Meadows making a film. Instead, it really is a documentary about the Stone Roses, and their unlikely 2012 reunion.

The title of one of the band’s best loved songs, “I am the Resurrection,” is actually the more appropriate word to describe the tour. It’s also the term lead singer Ian Brown used at the October 2011 press conference that announced the band’s reformation.

“This is a live resurrection we’re inviting you to,” Brown told the gathered members of the media, “so you better be careful.”

Made of Stone begins with this press conference and ends at Heaton Park in Manchester, England, where the Roses played to a hometown crowd of seventy-five thousand on June 29, 2012 (two additional and equally large gigs at the park followed on June 30 and July 1). In between, Meadows and his cameras follow the band from rehearsals, to the free warm-up gig they played at the tiny Parr Hall in Warrington, England, to the other, smaller shows that preceded Heaton Park. Throughout, Meadows interjects archival footage, combined with present-day interview voiceovers, to tell the story of the Stone Roses’ late ‘80s rise.

A significant amount of film time is spent at the Parr Hall gig. This is not without reason; it was after all the first time the classic Stone Roses lineup of Brown, guitarist John Squire, bassist Gary “Mani” Mounfield, and drummer Alan “Reni” Wren played together in front of an audience since 1990.

The band’s performance at Parr Hall is beautifully shot in black and white, but it’s the lead up to the gig that—from a cinematic standpoint anyway—is most memorable. Meadows spends roughly fifteen minutes (arguably a little too long, but overall it still works) on the hours before the band goes on, and especially on the people trying to get tickets. The show had been a secret until earlier in the day, and the camera catches people sprinting toward the venue to get into the ticket line, some of them with small children in tow and many of them having skipped out of work early when they heard what was happening. The fans lucky enough to secure entry look like six year olds on Christmas morning. The fans who got there too late look like people who have just heard that somebody just ran over their dog.

The film is not without its drama. As was well reported at the time, during a show in Amsterdam two and a half weeks before Heaton Park, Reni left his kit, jumped in a car, and took off. The band had planned to play sixteen songs that night and Reni left after the fifteenth, so it was hardly an Axl Rose-level storm off. Regardless, the crowd was angry and Brown, admirably, went out to tell them that the show truly was over and they should go home. “This is no joke, the drummer’s gone home,” he announced to massive boos. “Go on, get all your bad vibes out, I can take it.” Made of Stone shows us all of this, and if you’re a fan of the Stone Roses, it’s tough to watch. Especially when you consider it’s your fellow fans doing the booing.

After a brief montage of the press coverage and social media storm that followed the incident, there’s a scene of Meadows himself, in his hotel room the next day, explaining what happened (Reni was having monitor problems) and stating that for the time being he and his cameras are going home. “Obviously the last thing anyone wants at the moment is a camera ramming in their face,” he says. In this scene, Meadows (the fan) is genuinely afraid that the reunion is off. It’s immediately following this hotel room confessional that Meadows (the filmmaker) dips back into archival footage to give an overview of the band’s early ‘90s legal woes, managerial issues, and original disintegration.

It’s no spoiler to write that Reni returned, the reunion was not cancelled, and that the band is still together today. Meadows has since admitted that the whole situation in Amsterdam made him “physically sick,” and that he ordered all his cameramen to stop filming. “I did the opposite of what most filmmakers would do: turned my cameras off, put my crew in a room, and said that if anyone tries to sneak out they’re off the job,” he told NME back in April. “We’ve all seen it a million times, like the classic Metallica documentary [Some Kind Of Monster] which I love when they’re all in fucking counseling but it’s a bit Spinal Tap. I was setting out to watch the rebirth of my favorite band of all time. I’m not Michael Moore trying to expose the president.”

Justifiably, Meadows has received some heat for this. Turn off your cameras? Go home? Aren’t you there to document this reunion, for better or worse? Frankly, he shouldn’t have left. He should have continued to follow the tour. It might be instructive to put ourselves in his shoes though. Yes, he’s the documentarian here, but he’s also a fan. Imagine how he’d feel (and how any Stone Roses fan would feel) if he stuck a camera in a band member’s face at the wrong time and the whole thing went belly up.

Let’s be clear: Shane Meadows is not a journalist.That’s not a putdown, it’s just a fact The Stone Roses asked him if he wanted to film their reunion and he—as both a filmmaker who normally deals in fiction and a fan—said yes. His reaction to Amsterdam then is understandable, if not completely acceptable. Still, it must be said that this is one point in Made of Stone where Meadows The Fan took over to the detriment of Meadows The Filmmaker.

The cameras return for Heaton Park, which serves as the film’s finale. Unlike the Parr Hall gig, the band is filmed in full color as they play perhaps their greatest song, the epic “Fools Gold.” It’s a long scene but “Fools Gold” is a long song, and it gives Meadows a chance to cut back and forth between shots of the onstage performance and shots of crowd members dancing, mugging for the camera, making out, urinating, being dragged out by security, and singing along. There are no interviews or voiceovers; the music speaks for itself. It’s a good choice by Meadows, considering the blistering take of “Fools Gold” the Roses provide. The band may squabble a lot, but they sure can play.