Dan Kennedy could have written a book that extols the Huffington Post, WGBH, or Patch as the future of serious community journalism. He doesn’t, which means that he is on the side of the angels rather than the corner-cutting devils.

The Wired City: Reimagining Journalism and Civic Life in the Post-Newspaper Age by Dan Kennedy. University of Massachusetts Press, 192 pages, $22.95. 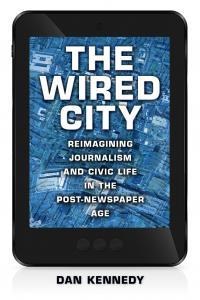 Dan Kennedy’s The Wired City is a modest but informative and at times inspiring book about admirable attempts, on a local level, to combat a pestilence that is crippling the well-being of professional journalism. For various reasons (exploited by corporate media types), readers have been hornswaggled into accepting that something of value can be gotten for gratis. As Kennedy observes, “we’ve have been conditioned to believe that news should be free.” The ease and ubiquity of technology generates the belief, even among those who should know better, that anybody can report a story or take a news photo: a couple of weeks ago the Chicago Sun-Times canned its entire photography staff, suggesting that from now on its news hounds will snap photos, apparently with their smart phones. Journalism appears to be hoping it can prove King Lear wrong: “Nothing will come of nothing.”

Because advertising is plummeting, off- and online, many newspapers are shrinking, and the results of the forced slim-down aren’t pretty. In some cases, publications are declaring bankruptcy and disappearing, while others are turning their backs on journalistic quality, embracing slick efforts to pull in readers. A number of publishers and media companies think becoming mean and lean isn’t about finding ways to do substantial reporting with less but squeezing more out of a minimal staff, ratcheting up the pressure by cutting salaries, benefits, and exploiting fears of termination. Online operations are increasingly staffed by the underpaid few orchestrating flocks of interns and bloggers, who are charged with posting consumer-generated content and/or providing fodder with eyeball appeal.

There must be alternatives to this dead end. Among the more promising—though harder and less glamorous—online possibilities are publications that reinvent the news room by using rather than abusing technology, setting up experiments that build on, even improve, the old journalistic model: investigative reporting whose integrity and bite both serves the community and pays journalists. In the midst of the tailspin, Kennedy, an assistant professor of journalism at Northeastern University and a working journalist for decades (I knew him when he wrote for the Boston Phoenix), chronicles welcome signs of life on the margins. The story of the craft’s rebirth is still in progress, so failures are to be expected, but Kennedy’s heartening assertion that his research has left him “profoundly optimistic about the future of journalism” comes off as more than the desperate fantasy of an academic training students for what looks an increasingly non-existent job market.

The Wired City examines a number of for-profit and nonprofit efforts to create a quality news business online that is economically sustainable. Most of sites Kennedy examines are situated in Connecticut, and they are not big operations—they are small because they meet a need for local news outside of the major markets. The star of the book is the nonprofit New Haven Independent, edited by Paul Bass, a superb Web newspaper with a staff of five and a budget (in 2011) of $450,000. What is this publication doing right? Kennedy provides, and then substantiates, the reasons: “the excellence of the journalism; the way in which Bass used reader comments to build a sense of community and advance the site’s reporting; and the financial model, which was built on foundation grants, institutional sponsorships, and reader donations rather than on the traditional advertising base.” Kennedy doesn’t call Bass and the other “entrepreneur journalists” he writes about heroes, but they are because they attempt to do right by serious journalism and the people who excel at the craft. The goal is bring the best of the past into the present, sustaining this kind of reporting and commentary through the cultivation of fragile funding, interactive roots in the community, hard work, initiative, nimble use of social media, and imagination.

Before going into the specifics, I must include some special pleading. I run a professional, online arts journalism site, so I was interested in the role that cultural reporting played in the brave new world of online local coverage. Apparently, very little. Limited resources means that you have to pick you battles. For Kennedy, and most media commentators, news coverage should be about potholes and politicians, exposés of graft and investigations of murder, “deep dives” into education and housing policy. The sites Kennedy admires, such as The New Haven Independent, feature meagre looks on the arts, tending toward bulletin board public announcements and puffy features. Neither online editors or media pundits believe that arts journalism is worthy of respect: arts coverage is on the same level as gardening news, fit for the chaos of the blogs. Yet as late as the 1930s, reviews and features of arts events could be found on the front page of major newspapers.

On one level, there is no argument—news that directly effects the day-to-day quality of the lives of the community trumps cultural coverage. But I would argue (though not here) that this nuts-and-bolts conception of journalism and its duty to enrich the public conversation is narrow to the point of self-defeating myopia. Aren’t the arts a vital way that a community knows itself, makes news and shares views, and learns about the dreams and aspirations of its have-nots as well as its haves? “A lack of fresh, relevant news can be as harmful to civic health as a lack of fresh, nutritious food can be to personal health,” claims Kennedy. When reporting about the arts is seen as nothing but an excuse for marketing, back-slapping, and boosterism it feeds junk food to the civic body.

Besides sizing up the Independent’s competition, notably the financially troubled but major for-profit New Haven Register, which is ramping up its online presence, Kennedy examines the online nonprofits Voice of San Diego and the Connecticut Mirror as well as for-profit ventures, including the Batavian, Baristanet, and CT News Junkie. He solidly interlaces interviews and background information on the players and the publications with perceptive analysis, asking many of the right questions, probing into such thorny issues as how it can be determined—with reasonable accuracy—how many people are reading online news sources. He also wonders about the lack of multicultural representation in online news rooms and the long-range hopes for nonprofit sustainability.

He doesn’t go deeply enough into nonprofit journalism and the issue of editorial independence—just how beholden are editors and writers to grant makers with specific agendas? Bass’s angry denial that grants don’t influence his coverage one way or the other isn’t enough: perceptions of conflict of interest undercut credibility. I want more than Kennedy’s assurance that readers (at least the ones he cherry-picked) perceive the paper as being fair to both sides of an issue. If disinterested journalism must be jettisoned for investigative reporting to thrive in the future, I want to know the price that will be paid: what is lost and what will be gained. As Kennedy argues, nothing of quality comes for free.

Aside from his compelling argument that legal restrictions on nonprofit news publications’ ability to endorse political candidates should be lifted, Kennedy’s approach to taking on the problems that beset meaningful journalism online is reserved to the point of nondescript. That might be because he is reluctant to tackle all the reasons for the uphill battle. In a laudatory column about The Wired City in the Huffington Post, Rory O’Connor writes that Kennedy asks the right question at the beginning of the book: “Since the rise of the commercial Web in the mid 1990s, the question has been: Who shall pay?” But surely that should be “Who shall be paid?” The Huffington Post stands as the fool’s gold standard when it comes to generating cash by cultivating content from unpaid contributors; it is the higher ups, rather than the street-level scoop-hunters, who get the dough. (The site was bought by AOL in February 2011 for $315 million. Kennedy notes that he is an unpaid contributor to the Huffington Post.)

The Huffington Post helped to reinforce the pernicious idea of “free content” that Kennedy sees as a major obstacle to maintaining quality online journalism. No doubt the Huffington Post‘s no-wage approach gave AOL the inspiration for Patch, “about 1000 hyperlocal sites in communities around the country.” The economics of the effort are shaky, concludes Kennedy, but the aim to establish Walmart-inspired journalism is unmistakeable: “Patch editors were ordered to recruit unpaid community bloggers—five to ten per site—in order to supplement paid content.” These sites, which offer little if any investigative reporting (at least from what I have read), are pernicious models for journalism’s downward mobility, mischievously sucking up some of the advertising and funding that might go to more substantial start-ups.

The Huffington Post‘s “always no wages” approach for working stiff writers, with some tinkering, also serves as the go-to set-up for such online news sites as WGBH’s, which invests as little as possible in investigative local journalism and hands-on community connection (outside of the wealthier precincts) while drumming up donations (and questionable partnerships with commercial entities) to pay its numerous vice-presidents and as well as talk show pundits hired for their innocuousness. Just think what Bass and the reporters on the New Haven Independent could do with the salaries paid to such genteel WGBH yakkers as Jim Braude and Margery Eagan? But broadcasting hot air is cheaper to bankroll than in-depth reporting. (Kennedy is a regular contributor on WGBH’s media commentary show Beat the Press.)

Still, Kennedy could have written a book that extols the Huffington Post, WGBH, or Patch as the future of substantial community journalism. He doesn’t, which means that he is on the side of the angels rather than the corner-cutting devils. The Wired City is a valuable start, but what is needed now are fact-based rabble-rousers who support superior local reporting by exposing the strip-mining strategies of corporate media. (From what little we directly hear from Bass in The Wired City, he sounds like that kind of firebrand.) That means asking the right questions: How much funding is actually going to serious journalism? Who is being paid and how much? Are all income levels in the community engaged in the creation of content, not just CEOs? Organizations dedicated to helping fledgling online news efforts thrive in an increasingly homogenized media world are being formed. The struggle to create a healthy “wired city” has just begun.