The more cerebral visitor may leave Collision18:present wondering if, like the classic definition of what constitutes pornography, “cyberart” is firmly situated in the eye of the beholder (or of the curators). 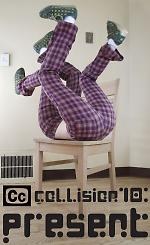 The new exhibition COLLISION18:present, at the new Boston Cyberarts Gallery in Jamaica Plain (through December 16) is evidence both of the distillation of Boston’s new media arts scene and of the expansion of what will be categorized under this broad—and loosely defined—label.

Boston Cyberarts has organized the successful, biannual festival since 1999, wherein scores of artists occupied display space in local museums and cultural institutions, storefronts, schools, you name it. But the organization has been working to display its cutting-edge media(ted) art beyond the confines of a two-week festival. The group’s Special Projects include curating large-scale screen content at the Boston Harbor Islands and the Boston Convention Center as well as mounting extended public art displays and performances at Atlantic Wharf.

The latest digital feather in Boston Cyberart’s cap is the acquisition of permanent, indoor exhibition space. Collision18:present is the first show to be mounted after the merger of Boston Cyberarts and the Axiom Center for New and Experimental Media. Boston Cyberarts now controls Axiom’s former gallery space adjacent to the Green Street Orange Line transit line.

Collision18:present curated by COLLISIONcollective members William Tremblay, John Slepian, and Bob Kephart offers something for everyone, a potpourri of mediums, techniques, narratives, and technologies. The range of works will likely ensure that some pieces will appeal to you—and others will likely leave you scratching your head, depending on your personal predilections.

The more cerebral visitor may leave Collision18:present wondering if, like the classic definition of what constitutes pornography, “cyberart” is firmly situated in the eye of the beholder (or of the curators). What exactly constitutes “new media art?” If this exhibit is any indication, it can now be loosely defined as “interesting stuff that’s not a painting.”

Is cyberart screen-based video art? A sizable chunk of the artwork, as one might suspect, is constituted of screen representations. As I approached the gallery at high noon on a recent Sunday, however, a bank of monitors lining the windows were unviewable due to the glare of the sun in this shadeless spot:

These comparatively “traditional” renderings of new media art present a range of technical wizardry ranging from the sublime (Jim Sussino’s Swarm, a digital scene of falling leaves that’s oddly mesmerizing) to the surreal (Everyday Absurdities by Sarah Buckius, a compendium of “absurd inventions or impossible sculptures”). Also of note is Marginalia: Crawl by Jeffu Warmouth, in which images of two men crawl on their hands and knees along the length of vinyl window blinds mounted on the wall. While this work technically falls under the rubric of video art, the artist’s clever reconfiguring of the projection screen transforms it into something fresh. The author’s note suggests that the installation explores the body’s relationship with “marginal aspects of our environments,” but I read it in more existential terms as an image of man struggling against restrictions of all stripes.

Is cyberart the insertion of technologies into otherwise non-digital work? It might be if one considers Natalie Andrew’s Hidden Marriage, which is made up of LED lights embedded in a miniature forest. Is it a digital ink-jet print? Keren Zaltz’s Untitled_HDR, which plays with representing motion in a static form, suggests it might well be.

Is it material—and narrative—fabrications in the service of a story? Collision18:present features not one but two types of alien boulders. Georgina Lewis designs her own imaginings of how moon rocks look—luminous, plastic-y, green, roughly the size of peaches—in “an act of benevolent shaming: refabricated moon rocks” as a way to tell a true tale of how the rocks have gone missing since they were collected by the Apollo astronauts. W. Benjamin Bray offers his take on Arctic sea ice, displayed in a drinking glass and situated alongside images of a trip to the Arctic Circle and a mediation of “unknown environments.” In both instances, the viewer is required to suspend disbelief and enter a fantasy realm where arctic ice is portable and enduring and moon rocks are indeed green.

The effect is wonderous and charming, if somewhat disappointing in its limitations. In retrospect, a viewer may be able to adjust the figure, which would help immensely.

Then there are the offerings that are digital and interactive, a more contemporary interpretation of the potential of cyberart. Joseph Farbrook’s Human Nature provides an Xbox controller that the viewer can use to navigate through a 3D digital world. Of what, I was not entirely sure, but I left with the sense that human nature is complex, dense, leans towards rectangular constructions, and is a bit gray.

Rob Gonsalves’s Jitterbot – a dialog in dance may harken some back to the balloon figure constructions of early 80’s digital renderings. The program translates the user’s kinetic gestures onto a green, balloon figure; a companion, red figure “follow[s] the visitor’s lead and sometimes JitterBot busts a move on its own.” The user can also select from a menu of music styles. Thankfully, this display was walled off from the rest of the gallery, allowing this reviewer to engage in an array of graceless twirls, karate kicks, and booty-shaking dance moves. In short, it was great fun and a tribute to technological mastery.

My favorite exhibit by far, however, is Nathan Boyer’s Come Closer. As I explored the gallery space, a voice somewhere asked if anyone was around. When I investigated, I found a small screen featuring a man and a pair of speakers mounted at the far end of a portion of the gallery. If I went up to the screen, the man ordered me to back away; if I held back, he pleaded to me to come closer. Though clearly prerecorded and a product of motion sensors, the effect was strangely unsettling, sparking ruminations relating to intimacy, language, and how close is really too close. In Come Closer, that point between closeness and claustrophobia was precisely measured; in the rest of us, the barrier is more fluid.

Whatever constitutes cyberarts, the creative minds at Boston Cyberarts and the CollisionCollective have mounted a creative show that displays the genre’s technological, creative, and emotional range.