Exciting things are happening in Israeli writing, and it is garnering considerable attention in Europe. But what about theater in Israel? Israeli Stage offers the curious a chance to see what is happening. 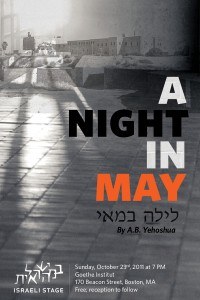 A staged reading of A. B. Yehoshua’s drama A Night in May at the Goethe Institut this Sunday (October 23) kicks off the second season of the Israeli Stage. I am not a big fan of staged readings, but the evening attracted my attention for a couple of reasons.

First, there are not nearly enough international theater productions in the Boston area (or in America for that matter); the creation of the Israeli Stage may be a harbinger of interesting things to come. Slowly but surely the realization is dawning on influential funding organizations that support should not automatically be funneled into the maws of large, non-profit institutions that cater to traditional (and shrinking) audiences or to Broadway-bound product, but to community-based, cultural projects that specialize in art that reflects the experiences of a diverse, American population, from the Hispanic to the Cambodian. American theater will take on a more global perspective (importing directors from Europe is not the same thing), and it is about time.

Besides that, I am an admirer of the Israeli writer A. B. Yehoshua, primarily through his novels and short stories (I recommend A Woman in Jerusalem). Other prominent Israeli novelists—such as Amos Oz and David Grossman—are routinely translated, and there is the Dalkey Archive Press’s excellent Hebrew Literature Series, among whose selections I would recommend Homesick by Eshkol Nevo and Heatwave and Crazy Birds by Gabriela Avigur-Rotem. Exciting things are happening in Israeli writing, and it is garnering considerable attention in Europe. But what about theater in Israel? Israeli Stage offers the curious a chance to see what is happening.

I asked Israeli Stage Producing Director Guy Ben-Aharon about the upcoming staged reading, the mission of the Israeli Stage, and his feelings about the inevitable issue of political point-scoring raised by the troupe. I was glad to hear that regional premieres and full productions lie in the future.

Arts Fuse: Why have you decided to start up the Israeli Stage in Boston now? Has there been a need for a company like this?

Guy Ben-Aharon: I started this initiative without knowing where it would go or what kind of reaction it would spark in people. For me it was a way to bring a little bit of my home (Israel) here. Our mission is to bring Israeli theater to American audiences in hopes that by providing Americans with an opportunity to connect to Israel on an emotional basis, they will be able to have a better understanding of our society as a whole. It will no longer be a one-dimensional place that you hear about on the news; it will become something people care about, something people can relate to on a non-political/personal level. To tell you the truth, I had no idea how many people are interested in this, and now I’m finding out. There’s a real hunger for this type of work.

AF: What kind of plays do you plan to do? American premieres?

Ben-Aharon: We are currently working on Savyon Liebrecht’s The Banality of Love and an adaptation of David Grossman’s To the End of the Land (a co-production with Harvard set for November 6). Most of these shows are regional premieres, if not national premieres, as there are not many theater companies that are offering the kind of programming that we are. Israel, much like the United States, is a melting pot of immigrants. My hope is that Israeli Stage’s programming gives a sampling of the many different lives people lead in Israel, be it differing in origin, culture, socio-economic background, life story, or what have you.

AF: Talk about the staged reading of A Night in May that you will be presenting this Sunday. Why did you choose this play? Wouldn’t a more contemporary script have more impact?

Ben-Aharon: I actually got to meet Avraham [Abraham B. (“Bulli”) Yehoshua ] this past summer in Haifa. I wanted to thank him for writing Possessions, Israeli Stage’s first production [November 2010]. We got to talking, and he handed me the script for A Night in May, his first published play. I read it in Hebrew, and then in English, and knew that it would be a great way to open our 2011–12 season. People really connected to the characters he created in Possessions, and I find that that same universal quality rings true for A Night in May.

I also chose A. B. Yehoshua’s A Night in May because of its relevance to today’s ongoing debate regarding the Middle East. We keep hearing about the 1967 borders, but rarely do we hear a personal story regarding the six-day war and what the mood was like preceding (and proceeding) it. A Night in May gives us a glimpse into the life of a Sephardi, Jerusalemite family as they face the reality of the approaching war. It was really amazing to hear the conversations it sparked in the rehearsal room and outside of it. Susan and Brynna had some really interesting stories about where they were the night the war broke out, and I, for the first time(!), heard the story about where my mother was that same night [May 22nd], which the play depicts.

As Susan wrote for our blog

Yehoshua has written a timeless play, set against the backdrop of what some think is a pending national emergency. Though set in 1967, A Night in May is relevant today, for throughout time, nations face national emergencies, and the effort to lead normal or not so normal lives is global under such conditions.

AF: A. B. Yehoshua’s play, with its dream-like depiction of a dysfunctional family, focuses on the traumatic impact of war on the minds and hearts the country’s population—it is a strong theme in Israeli writing. Do you see this as the major role for Israeli playwrights—to make society see the price of the situation? And of what value is this approach to American audiences?

Ben-Aharon: I think the major role of every playwright is to write a story that has yet to be written, be it in the way you write it or the content itself. War is a constant reality in Israel. I can’t say that it is the playwrights’ role to make society see the price of the situation, but rather it is the playwrights’ role to tell the story that hasn’t been told. Take David Grossman’s writing—whom I find to be one of Israel’s most prolific writers—it tells stories from the universal human condition . . . it is inherently political, but it is universal in its effect.

My hope is that through art we will be able to find common ground. Art will provide a platform for conversations we don’t normally have. Last week my brother was in town from Tel-Aviv, and we went to see The Speaker’s Progress by SABAB, a group based out of Kuwait. After the show, Ofer, my brother, and I had an hour-long conversation with one of the actors, Nassar al Nassar. He is from Kuwait, and we are from Israel, yet against all the odds we both stayed out in the rain to talk to one another. We talked about [European] football, politics, food, Arab culture, Israeli culture, and how similar we are. It was really heartwarming. We exchanged emails and are planning on staying in touch.

AF: Talk a little about Israeli drama—what are its strengths and weaknesses? What have Boston audiences been missing?

Ben-Aharon: Israeli drama’s strengths and weaknesses are one and the same. The reason Israeli theater is so engaging to me is because of its multi-layered cultural, emotional, and political implications. It often includes too much: the differences between the Ashkenazi and Sephardic immigration, some resonance of the many wars we have fought, the establishing of the State after the Holocaust, Zionism, the Middle East conflict over time, etc. I find that Israeli plays can often feel “unfocused.” They open up many windows, to use the parlance of the times. When done well, it can be thought-provoking and encompassing of what the Israeli condition is about, but when unsuccessful it is overwhelming.

Israeli Stage provides a stage for Israeli theater to be featured in Boston. We often hear Israeli music—Idan Raichel—or see films—Beaufort—but rarely do we get the opportunity to see Israeli theater. We are filling that gap.

Brynna Bloomfield, an Artistic Associate, put it best as to what Boston has been missing:

I’ve seen a lot theatrical productions that promise provocative and entertaining experiences but in reality deliver more propaganda than art. I have never been able to accept that in order to create “conversation” around an issue, one has to take sides. Once you choose a side, you want and need to win. I’ve wanted to see dramatic conversations that include Israelis for many years, so I go to any play that so much as hints at Israeli content, only to be a captive witness to one point of view. Having been thwarted in my quest for “Israelis on the American Stage” for so long, I am thrilled to be able to contribute to this theater company in any way possible.

AF: How political do you plan for your company to be? Will you stage plays by Palestinians living within the borders of Israel?

Ben-Aharon: I do not have plans for this company to become political. One could say we are inherently political because anything that has to do with Israel carries a political connotation with it. However, one of the reasons I started this company was to de-politicize or rather, offer a non-political connection to Israel for Americans. It is often said that art is a reflection of society—Israeli Stage is offering a reflection of Israeli society: Israeli-Arabs, Muslim and Christian alike, are just as much a part of Israeli society as the Jewish population in Israel, the Druz population, and so on and so forth. I am actually in talks with an Israeli-Arab theater artist now in hopes that we can collaborate on something together.

AF: What are your plans for the future? Will you be presenting full productions soon?

Ben-Aharon: I have to say that there is something kind of wonderful about staged readings—they allow you to really focus on the language of the play. That being said, I do hope that Israeli Stage will get the opportunity to present full productions in the near future.