You are here: Home / Books / Book Review: “Zugzwang”and the Pleasures of Chess Noir

It’s an understatement to say chess has been good for literature; the game has even inspired people not known for the written word to produce memorable prose. Consider the following, for example, by composer Sergey Prokofiev apropos a game he witnessed in pre-World War I Russia: “I watched the . . . board descending into a state of incomprehensible complexity, with virtually every piece exposed to attack; this sent me into a state of pure ecstasy.” 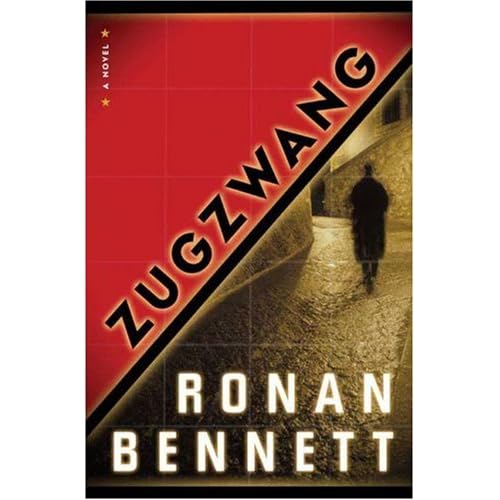 One doesn’t really need to play chess to recognize the ecstatic state Prokofiev describes; it arises, as well, from other deeply obsessive pursuits. Similarly, one isn’t really required to play chess in order to relish the twin peaks of twentieth-century chess fiction, Vladimir Nabokov’s The Defense, and Stefan Zweig’s Chess Story.

In the case of The Defense, you need never have accepted (or declined) a Queen’s Gambit, fallen for a poisoned pawn, or experimented with a hypermodern defense to thrill to Nabokov’s saying of Luzhin, the book’s chess anti-hero, that:

He felt quite clearly that this or that . . . square was occupied by a definite, concentrated force, so that he envisioned the movement of a piece as a discharge, a shock, a stroke of lightning — and the whole chess field quivered with tension, and over this tension he was sovereign, here gathering in and there releasing electric power.

Likewise, with Chess Story you can be utterly innocent of chess mechanics and still appreciate Zweig’s characterizing chess geekdom by saying that, “unworldly as they seem, [the players] burrow like termites into their own particular material to construct, in miniature, a strange and utterly individual image of the world.”

But Ronan Bennett’s recent novel, Zugzwang, is a different sort of entry into the field of chess fiction, one that prefers not to spare you the nitty-gritty of the game. The book is a chess noir in which the ability to play, and to comprehend the system of algebraic notation used to record games, adds another dimension to the tale. Unlike Nabokov and Zweig, Bennett isn’t content to keep chess itself offstage, while harvesting the exotic effects — from mental breakdown to ecstatic states — that the game can generate in susceptible minds. If you’re squeamish about, say, capturing en passant; if you’ve never heard of Nimzovitch and if the very name Bobby Fischer neither excites nor demoralizes you (or both), it could be you’ll only get half of Bennett’s noir. It could also be that is enough.

The novel is set on the eve of the First World War in St. Petersburg, where a chess tournament — modeled on the one that so aroused Prokofiev — draws the day’s chess luminaries to the “ballroom of P.A. Saburov’s magnificent house on Liteiny Prospect.” Outside the mansion, Tsarism and its enemies are provoking each other to ever more violent confrontations. Plus, there are splits on each side, as a result of which some autocrats and some revolutionaries wind up colluding in a plot to give the Tsar a Benazir Bhutto type farewell. Whether they’ll succeed or not is linked to success and failure in the Saburov ballroom.

In chess, the German word zugzwang (”compulsion to move”) describes a situation where a position is tenable but any move fatally weakens it.

Zugzwang is rich in historical detail: A man named Dzugashvili, for example, known to posterity as Stalin, flits through the pages hounded by police, and Lenin, at the head of the Bolshevik Central Committee, can be heard propounding from afar. Zugzwang is an historical thriller that makes good use of the fact that chess games are thrillers, too.

The book’s main character, Otto Spethmann, a psychoanalyst, is perfectly positioned to take up a recurrent theme of chess fiction,the curious connection between chess greatness and looniness. The danger of derangment is personified in the book by Spethmann’s patient, Avrom Rozental, a stellar player favored to win the tournament until he starts falling to pieces in a manner his analyst can make sense of only by consulting certain passages in the Talmud. Spethmann says of Rozental that: “Whenever I looked at him, I was put in mind of a child who has lost his parents in a crowd. Chess was Rozental’s life. Beyond this was a void.”

Spethmann plays chess himself, and is engaged, when the book begins, in what he expects will be another friendly contest with R.M. Kopelzon, a celebrated violinist. This is the game Bennett diagrams and analyzes, asking about one position: “Is this any good?” and about another: “Can White make further progress?” As the plot thickens, this game turns out not to be recreational but momentous. When Spethmann tells himself he has to be “utterly precise and utterly ruthless,” and that, “Everything depended on the f-pawn,” he knows that the lowly f-pawn governs the fate of his lover and his daughter, and marks a turning point in Russian history.

Spethmann’s game with Kopelzon heads toward an unusual position known as zugzwang, which is predicated on the fact that in chess refusing to move is not an option, and that in some cases every remaining move seems destined to bring on ruin. Providing genuine chess moves does not prevent Bennett from mining the game, as have many before him — Samuel Beckett, for example, with Endgame — for metaphors. Zugzwang is Bennett’s metaphor for a Russia hurtling toward war, chaos, and revolution. “When things reach this pitch,” he concludes, “we are all in zugzwang. Past wrongs will not be forgiven. Rage and numbers will tell.”