Just over a month ago, conventional wisdom had it that the long-running Pollock Matter Affair, one of the most contentious art controversies in living memory (see past posts in Arts Fuse and Anonymous Sources), had finally ground to a halt. Oops. As predicted in The Arts Fuse in November, the debate has found some more legs to run on.

It may now have entered its tabloid phase. 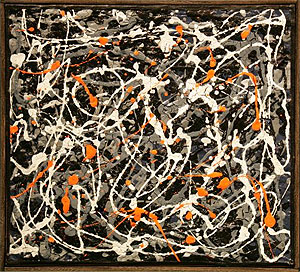 One of the alleged Pollock paintings in a dispute that has taken a tawdry turn.

The latest round follows the Nov. 28 symposium in New York City, sponsored by the International Foundation for Art Research (IFAR) that at one point seemed destined to wrap up any lingering questions about the controversial Matter “Pollocks,” a group of abstract paintings discovered in a Long Island storage locker 2002 and attributed by some to Jackson Pollock.

The symposium, “Are They Pollocks? What Science Tells Us About the Matter Paintings,” featured James Martin, a conservation scientist and owner of Orion Analytical L.L.C. of Williamtown, MA, who completed a study of the paintings for their discoverer, Alex Matter, in 2006. Unlike two other studies, Martin’s had not been officially released because he feared a lawsuit from his client, though he apparently began to discuss his findings at public meetings several months before he completed the report.

A series of angry allegations and counter-allegations have followed the IFAR event, with Matter’s attorney, Jeremy Epstein, accusing Martin of unprofessional behavior, in remarks made to the East Hampton Star for a story published Dec. 6.

“After the draft report was received we called [Martin] up and said we wanted to discuss it with him along with Ellen Landau,” Epstein said, referring to Prof. Ellen Landau, who initially made the attribution to Pollock and who helped organize the Pollock Matters exhibition that features the paintings. “He refused to meet with me. . . . I’ve been a lawyer for 30 years and he’s the only hired expert I know of that declined to meet with the person who hired him.”

“We asked to see the underlying scientific documentation. He said it was destroyed, but he would recreate it if paid a lot more money. We refused.”

“I’ve said all along no one is threatening to sue anybody. It’s a figment of Mr. Martin’s imagination.”

But “[i]s Alex Matter prepared to concede the paintings are not authentic?” the Star asked. Epstein answered: “No. We don’t regard Mr. Martin’s conclusions as reliable.” Martin responded in a letter to the editor: “This statement [about destroying documentation] is patently false. I never made such statements, and have preserved all scientific data pertaining to the Matter paintings. In fact, in February 2007, my firm prepared and delivered a second report that included underlying scientific documentation. Apparently, Mr. Epstein is unaware of this fact. Further, my firm neither requested nor received payment of any kind for this [second] report.”

Meanwhile, Cleveland, Ohio, conservator and Martin friend Al Albano, director of the city’s Intermuseum Conservation Association, took further exception to Epstein’s remarks. “My concern is that the credibility of a highly regarded and intelligent colleague is being impugned,” he told the Cleveland Plain Dealer,

In retaliation, Albano, who had initially recommended Martin to the Matter exhibition organizers, released to the Plain Dealer private emails from 2005 and 2006, in which the organizers of the Pollock Matters exhibition considered cancelling the show after preliminary results of the scientific studies suggested that they contained materials only available after Pollock’s death.

Although the substance of the emails was not exactly news, having been made public in February 2007 by Boston Globe arts reporter Geoff Edgers, the Plain Dealer devoted a front page story to the leak, written by the persistent Steven Litt. Litt has remained the Captain Ahab of the Matter paintings after other journalists have lost interest in the long-running and often highly technical debates about the works. (The controversy actually has little to do with Cleveland, except for the fact that Landau teaches there, at Case Western Reserve University.)

In Litt’s article, Landau and Matter both responded in kind, pointing out that the leaked emails were both old news and had been sent to Albano while he was still informally consulting with them on the exhibition project.

“The comments forwarded in confidence to Al Albano became outdated soon after they were sent, when it became clear that dating of pigments based on patent dates requires additional research…,” Landau said in a prepared statement. “Despite the paint analysis, there is much documentary and circumstantial evidence that appears to link these paintings to Pollock’s relationship with the Matters. What that link is hasn’t been determined yet.”

Alex Matter pointed out in another prepared statement that an early “fractal” study of the Matter works, conducted by physicist Richard Taylor, had already been refuted in two subsequent scientific studies of his methods. “Research is ongoing,” Matter said of the works he discovered in the effects of his late parents, who were close friends of Jackson Pollock, “and I hope one day we will learn the truth.”

Albano, on the other hand, told Litt that Martin’s conclusions were “irrefutable” and had to be taken with the “utmost seriousness.”

Far from settling the Matter issue once and for all, the Nov. 28 IFAR symposium seems to have resolved nothing and pleased no one. Because those still supporting the Pollock attribution did not attend the IFAR evening (Landau was invited to speak but declined), the event came across in media reports as highly partisan, far from the “impartial” role IFAR usually tries to project in scholarly disputes.

The Pollock Matters exhibition, complete with the disputed paintings, exhibited without attribution, has now moved on from Boston College’s McMullen Museum to the Everson Museum in Syracuse, where it will be on view through March 20. Further responses to Martin’s IFAR allegations, which, according to news reports, included suggestions that the Matter paintings were deliberate frauds, are said to be in the works.

After a very long opera, everyone is anticipating that last, dramatic act to the Matter Pollock Affair. But neither side wants to vacate the stage for the other. We may be waiting for that final aria for years to come.