“Criticism will always have the force of the child in the story about the emperor’s new clothes, because there will always be naked emperors who everybody says are wearing today’s Crown Jewels.” — Eric Bentley 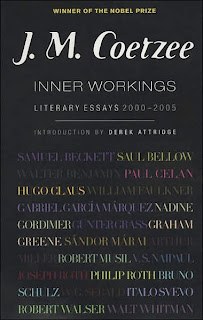 Given the shrinking amount of column inches for book reviews in mainstream newspapers and magazines, it is no surprise that book review editors are reluctant to print negative criticism. Why waste precious space in the paper to pan a book? Reviewers know this, and they calibrate their consumer guide judgments — upwards — accordingly. Of course, this ignores one of criticism’s traditional strengths — it is a public forum for the articulation of dissenting ideas about literary value and taste.

When serious critics complain about the presence of bad reviews it is particularly discouraging, perhaps because it is unexpected. In his Los Angeles Times review of J. M. Coetzee’s new collection of literary criticism, Inner Workings: Literary Essays 2000-2005, James Marcus is unimpressed by what he sees, particularly the lack of passionate zing that Coetzee brings to his cutting evaluation of admired Hungarian writer Sándor Márai:

“In some cases, it’s the subject that fails to stimulate Coetzee’s imagination. His long essay on Sándor Márai goes on for 20 pages in a mounting atmosphere of critical fatigue. Coetzee has every right to pan Márai’s work. But if he has concluded that the Hungarian novelist is strictly second-rate, why make the reader slog through acres of lukewarm prose? Why reprint the piece, which is essentially the equivalent of the surgeon general’s warning on a pack of cigarettes?”

Granted, Coetzee, who won the Nobel Prize in 2003, could have brought much more stylistic brio to these essays – sometimes it feels as if he is content to sleepily regurgitate his research, waking up on occasion to make a trenchant comment. But my agreement with Marcus ends when he lists the pieces he likes best in the collection, all admiring portraits:

“Thankfully there are brighter spots. Coetzee’s essay on Joseph Roth, Robert Musil and Bruno Schulz – all progeny of the Austro-Hungarian empire – send out sympathetic sparks. Like the author, each of these giants lived in the debris of a crumbling civilization and regarded the ancien régime with mixed feelings.”

These essays are pedestrian celebrations, though Coetzee makes some salient points about Michael Hofmann’s translations of Roth. The piece on Márai is far more interesting because it takes a dissident stance. Many reputable literary critics hail Márai as a neglected master from Eastern Europe who is finally getting his due with the English translations of his novels Embers and The Rebels, among others. Coetzee believes Márai is “slight” and suggests some reasons – from the writer’s use of popular romance elements to his uncritical vision of middle-class conformity — for the unwarranted chorus of enthusiasm. I’m glad the takedown made the volume, as I am happy that Marcus’s mixed-to-negative review of Inner Workings was published by the Los Angeles Times — no doubt because Coetzee is too conspicuous an emperor to ignore.